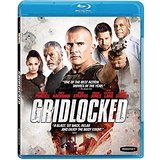 It’s clear that Canadian filmmaker Allan Ungar and practically everyone involved with Gridlocked have seen their share of action flicks. More specifically, this crew is out to recapture the raucous, rowdy, R-rated spirit of late ‘80s and ‘90s franchises like Lethal Weapon and Die Hard. While Gridlocked doesn’t come close to matching the wit or winning formula of those action classics, this straight-to-DVD effort still manages to be a pretty fun throwback.

Everyone knows you can’t have a proper buddy action/comedy without a pair of mismatched partners. David Hendrix (Dominic Purcell) is a humorless former SWAT leader who has been reduced to doing low-level work for the NYPD after taking a bullet on the job. His life gets worse when he is forced to babysit bad boy actor Brody Walker (Cody Hackman), who was caught misbehaving by paparazzi and agreed to shadow a policeman in order to avoid jail time. At first, Hendrix has little patience for Brody’s immature antics, but the two men gradually form a bond.

“You said I’d get to see some real action.”

One night, Hendrix takes Brody to a remote police training facility and introduces him to a few of his former SWAT teammates. Unfortunately for them, that happens to be the same night a group of mercenaries attack the facility looking for valuable assets seized by the police. (Most of the police department’s manpower has been diverted to the city in anticipation of a big United Nations Summit.) The mercenaries are led by a former colleague of Hendricks’ named Korver (Stephen Lang). As a result, Hendricks, his SWAT teammates, and some stray security guards have to band together to fight off Korver’s mini-army. Oh yeah…Hendricks also has to protect Brody…and make sure the goofball movie star doesn’t drive everyone nuts.

If you judge Gridlocked by its (Blu-ray) cover, the movie simply looks like the latest disposable piece of junk food on the low-budget action heap. I mean, Straight-to-DVD Hall of Famer Vinnie Jones is even here! (The British tough guy plays Korver’s right hand man.) However, the movie’s lighthearted, nimble tone is apparent early on: Hendrix disposes of some crooks in a fairly standard, bone-crunching way…but then a drug dealer gets amusingly starstruck after spotting Brody.

In addition to directing, Ungar co-wrote the script with Rob Robol. The most obvious influence is filmmaker Shane Black, particularly the cranky, buddy cop antics of Lethal Weapon and The Last Boy Scout. To bang the point home, not only does Danny Glover show up to play a kindly security guard, but his character even says, “I knew I was getting too old for this s—!” Unfortunately, Gridlocked loses a considerable amount of momentum during the siege in its middle portion, when it becomes more of a standard, micro-budget action flick. (The set pieces are actually pretty impactful, even if they lack ingenuity.) Fortunately, the movie rediscovers its groove in its final act.

I’m not suggesting Purcell and Hackman are the next Mel Gibson and Danny Glover — or even the next Bruce Willis and Damon Wayans — but they have a pleasing, believably prickly rapport. Purcell — who is best known for being on the wrong side of the law (Prison Break, Legends of Tomorrow) — doesn’t have to deviate too far from his hardass persona to play Hendrix, but his deadpan delivery is a good match for Hackman’s yammering. Meanwhile, Hackman — a martial artist and former World Karate Champion — is very effective as a pest. (Although it’s odd that the karate champion in the cast does the least fighting in the movie.) Lang (Avatar) obviously has the chops to play a great bad buy, but he’s not given very much to do after displaying both charm and menace in Korver’s introductory scene.

Besides raiding Shane Black’s filmography, Gridlocked also nods to John Carpenter’s Assault on Precinct 13 (Hendrix and his undermanned cops protecting the police training facility) and John Badham’s The Hard Way. The latter film is about a bratty movie star (Michael J. Fox) who is paired with a no-nonsense detective (James Woods) to research a role. (Funnily enough, the bad guy in The Hard Way was played by…Stephen Lang! On top of that, Gridlocked even cast an actor named James A. Woods, who plays one of Hendrix’s SWAT teammates.)

Obviously, Gridlocked owes a huge debut to the many action comedies that came before it. Thankfully, the movie proves to be an entertaining diversion in its own right.

Gridlocked is presented in an aspect ratio of 2.40:1. The 1080p image is arrived at with an AVC MPEG-4 codec at an average of 27 mbps. The only burst of color comes courtesy of Brody’s appearance on an entertainment news show. Otherwise, the image is generally as dim and dull as you might expect from a movie where the characters spend most of their time hiding in the shadows. The presentation fares much better during close-ups than it does in medium shots. Black levels could definitely be inkier, but they offer decent separation. Given that a significant chunk of the film takes place inside a darkened building, it’s not really fair to expect a feast for the eyes. However, this visual presentation doesn’t bring much sizzle to make up for those limitations.

The DTS-HD Master Audio 5.1 track is where the movie’s A/V presentation truly comes to life. Gunshots and body blows are accentuated nicely here throughout all channels. There are also frequent (if imprecise) instances of directionality as bullets and bodies go flying all over the place. Combine that with cleanly presented dialogue that never gets drowned out, and you’ve got a lively well-balanced track.

Deleted Scenes: (11:34) There are eight total scenes and about half of them expand on existing material from the theatrical cut. (This includes a longer version of the TV interview that plays over the end credits.) The most noteworthy (and titillating) additions involve Trish Stratus’s Gina and her relationship with one of the other cops on her team.

Kicking It Old School — The Making of Gridlocked: (15:53) Not surprisingly, cast and crew talk about paying homage to Lethal Weapon and Die Hard. I was also amused to learn that Purcell and Hackman’s playfully abusive, big brother/little brother chemistry apparently carried over off-screen.

Inside the Action (6:40) A short breakdown of the movie’s hand-to-hand combat and gunplay, including footage of the actors learning their choreography.

And with multiplexes and studios becoming increasingly obsessed with cranking out PG-13 product — I’m still bummed Shane Black’s funky and funny The Nice Guys didn’t gain more traction at the box office — maybe the home video market can serve as a haven for this sort of gleefully old-school action movie.