The 100: The Complete Third Season (Blu-ray) 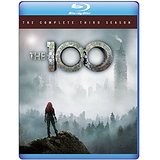 “We were born in space. They told us the ground was uninhabited, but they were wrong, and we’ve been fighting for our lives since the moment we landed. Some of us have been broken by it, but most of us are still here, trying to build something real and lasting out of the wilderness… a home.”

You should know the setup by now. If not, you can check out our previous reviews: Season 1 & Season 2. The show is based on a new series of books from writer Kass Morgan. The crew here has a little bit more room to operate than do most shows based on book series. The first book had not yet been released when they started filming the series. Series creator Jason Rothenberg had the fortune to preview the book’s outline and first few chapters. It dovetailed in with an idea of his own which was quite similar but dealt with the survivors exploring an alien planet for sustainability. I think this is the better idea and certainly has great potential. Now it’s all about the planet. Space is no longer a part of the landscape. We’ve gone away from Lord of the Flies and its do-whatever-you-want slogan. There is organization and unwritten rules now, but there’s a certain savagery that is the necessary outcome for the things they’ve seen and done.

As the season starts, a walled city has been built out of the remnants of the fallen space station. It’s called Arkadia, and it’s been peaceful here in the three months since we last saw these characters in Season 2. Clarke has been roaming the wilderness and has taken on a mythical/legendary persona the grounders call Wanheda. It’s creating problems, because it is believed that whoever kills her will take on her mystical powers. That puts her squarely in the middle of a grounder power struggle that eventually leads her to the capital city of Polis and once again with the grounder’s leader/commander Lexa, played by one of the show’s best and strongest performers, Alycia Debnam-Carey. She gives one heck of a solid performance. Her scenes with Taylor’s Clarke have taken that character to a new level. There’s wonderful chemistry here that wasn’t even utilized to its fullest.

Lexa and Clarke have a pretty hot relationship that has led to a bit of a controversy at the recent San Diego Comic-Con. Apparently, there is something called the “lesbian death trope”. It has to do with a perceived high number of minorities and gay characters killed in movies and on television. I haven’t done the research, but I suspect those folks are way out of line on this show.

Firstly, people get knocked off on this show in droves every episode. The series is almost entirely driven by conflict. The ARC survivors fight among themselves as well as with the grounders. The ARC people spend more time on bickering than solving the issues they face. Conflict can be found on micro and macro levels here. It’s all around this series, and without it there’d be nothing to see here. The writing spends a lot of time rehashing stale arguments that end up doing more to fill space than actually drive the plot forward.

Secondly, this show has presented several gay encounters, and the fact that Clarke is the show’s hero completely flies in the face of those kinds of accusations. The real problem here isn’t gay/straight or who dies. The show finds itself often bowing to the typical lowest common denominator in the audience. OK, here’s the situation. Your people are dying both on the ground and in space. There are people in camp missing. Primitive warrior guys are on their way to wipe you out. Disease and famine are taking their toll. You need to build and replenish weapons. What do you do? Of course, you take time out to get naked and roll in the sack for a while. Running from the bad guys? There’s plenty of time to stop and stare deeply into each other’s eyes. Arrows are flying around your head? It’s the perfect moment to stop and talk about your feelings. Thanks, writers, for keeping it real…and sexy, I guess. It’s not who is sleeping with who; it’s the rather prolific encounters during times of crises.

There are basically three big stories intertwined in the third season. Jaha has found his City of Light. It’s an AI named Alie, played by Erica Cerra. Jaha distributes chips called “the key” that bring more followers into his camp. The problem is that Alie wants to help humanity so much, she’s the one who destroyed the planet in the first place, because there were just too many pesky people running around. Now she wants to take away their pain. You know how that ends up on these shows. Clarke and her people have to find a kill-switch to stop Alie from taking over everybody. It’s basically Invasion of the Body Snatchers. This key is also tied to how the grounders select a commander.

The second thread involves a nice look into grounder civilization and politics. There are 12 clans, and Lexa and Clarke want to make the Arkadia people the 13th clan. It will provide protection and integrate them into grounder society. That means bowing to the conclave’s commander. Of course, that’s going to split people’s allegiances and lead directly to the third thread.

The third thread begins with the discovery of more crash survivors, led by Pike. Pike’s played by Third Watch favorite Michael Beach. Half his group have been killed by the grounders, and the last thing he wants is peace. His actions lead directly to more conflict and what we would consider today war crimes. All of this comes together in a two-part finale that gives you plenty of action.

Each episode is presented in its original broadcast aspect ratio of 1.78:1. The 1080p image is arrived at with an AVC MPEG-4 codec at an average 25 mbps. The high-definition image does a pretty solid job of presenting the two worlds here. Arkadia is almost monochromatic. Lots of dull grays and off-white colors. Earth, however, offers plenty of lush greens and tons of gritty texture with all of the mud and dirt. Thankfully, a show where the characters show the grime of the situation in their clothes and hair. Black levels are a little better than average, offering us some glimpse of what might be in the shadows.

The DTS-HD Master Audio 5.1 is really there to serve the dialog more than anything else. Scenes aren’t very aggressive in the surrounds. There’s a few ambient sounds from the woods that gives you some ear candy and allow you to be somewhat immersed in the environments. The score consists of a lot of ballads that appear to be mixed a bit softer than I’m used to. The original music is pretty sparse.

Ice Nation – Brutal And Fierce: (3:21) The clan that causes the most trouble here is Ice Nation, and this brief feature profiles the clan.

Polis – Grounder Capitol: (5:29) The centerpiece for this new location is a large ruined tower in a destroyed city. It’s like the Capitol Records building with the edges torn off.

Previz Stunts Season 3: (8:12) A look at the preparation for the many fights in the series.

The last episode sets up a new problem for next season. It looks like humanity is on the clock, and we’ll have to wait until next season to see how it might get solved. Each season the series has re-tooled itself. This season is very much an attempt to be Game of Thrones. The attempts are quite obvious at times. Next year will obviously be something very different. “The old ways are dead.”

Gino Sassani is a member of the Southeastern Film Critic's Association (SEFCA). He is a film and television critic based in Tampa, Florida. He's also the Senior Editor here at Upcomingdiscs. Gino started reviewing films in the early 1990's as a segment of his local television show Focus. He's an award-winning recording artist for Omega Records. Gino is currently working on his 8th album Merchants & Mercenaries. Gino took over Upcomingdiscs Dec 1, 2008. He works out of a home theater he calls The Reel World. Favorite films: The Godfather, The Godfather Part II, The Body Snatcher (Val Lewton film with Karloff and Lugosi, not the pod people film), Unforgiven, Gladiator, The Lion King, Jaws, Son Of Frankenstein, The Good, The Bad And The Ugly, and Monsters, Inc.
Batman v Superman: Dawn of Justice (Blu-ray 3D) The Invitation (Blu-ray)