Posted in: Disc Reviews by Brent Lorentson on July 29th, 2016 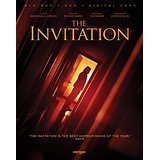 It seems there have been a lot of horror films involving dinner parties that have gone wrong.  You’re Next may be the best example to take on this idea, and I have to admit to being a fan of the film. It was a fun hipster horror film that kept the story moving forward and delivered more than a fair share of violence and gore.  Then there was last year’s creepy gem The Gift, a film that captured the horror of the past coming back to haunt you.  When it comes to The Invitation, it’s a film that seems like a hodgepodge of both You’re Next and The Gift, but also a handful of other films.  It’s a film that feels so familiar, but as you watch it manages to avoid many of the stereotypical film tropes viewers have grown used to over the years.  The trouble is, although it may lift material from several horror films, I have a hard time considering this a horror film or even a thriller; instead at times I feel this is an execution of tedium that teases horror but never quite delivers.

The film starts off ominous enough with Will (Logan Marshall-Green) accidently hitting a coyote while on his way to a dinner party.  It’s a sad and semi-violent scene; you may be thinking that perhaps this is a red herring for what is to come, or as the filmmakers would have you believe that it’s a simple glimpse into Will’s life.  Instead I found the scene bothersome, simply because I don’t believe this character would continue on, to go to a party he doesn’t want to be at, when there is already so much emotional baggage awaiting him.

The party turns out to be  hosted by Will’s ex-wife Eden (Tammy Blanchard) and her new husband David (Michiel Huisman), and it doesn’t take long for the weirdness of the get-together to become all the more apparent.  Early on in the story it is clear that something tragic has occurred between Will and Eden, and though it’s been years since seeing one another, the pain of returning to the home is evident.  As for the reason that Will and all his friends have received an invitation for this get-together, well, there is a lot of shuffling around to arrive to that moment, and lo and behold, it’s to show the friends a recruitment video for a cult.  So much more could have been made of this moment, but it’s a scene that simply feels anti-climactic.  But Will isn’t satisfied with the video being the reason they’ve all been brought together; as it turns out he happens to be right.

On a technical level, this is a beautifully made film.  The performances manage to weigh in between genuine and creepy, and the cinematography is beautiful, especially when you have to consider 95% of the film is shot inside the home.  The problem is the driving force of this film that keeps the story on a forward track is the inability of characters to question their host’s motives.  Sure, we have Will asking questions, but instead of anyone siding with him, he continues to be looked upon as though he was a raving loon.  OK, I can buy that it may be hard for friends to take a negative leap in the actions of a loved one, but these characters are so complacent you simply want to shake them.

Then there is the issue of the film being a slow burn. By slow I mean this film crawls at times, only to give us nothing but more frustration.  When the film finally decides to pick up the pace and remembers it’s supposed to be a thriller, it’s simply not enough to save the film.  Too much time is wasted trying to convince the audience how sophisticated these characters are, when instead the film could have used a stiff injection of some fun.  I really wanted to like this, but the film simply fell flat and never got going till the final minutes of the film.  This would have been more impressive as a short film; unfortunately there doesn’t seem to be much commercial value in doing those.

The Invitation is presented in the aspect ratio 2.35:1.  The 1080p image is arrived at with an AVC MPEG-4 codec at an average of 30 mbps.  This is a very good-looking film.  The majority of the film is shot with warm colors with a lot of browns and tans cluttering the screen.  While there are moments of great detail, the film lacks plenty in the way of having an appealing color palette.  This is art house cinema through and through.  Unfortunately it doesn’t have a visual bite to reel us in.

The DTS-HD Master Audio 5.1 track is well done.  The violin strums that help accentuate the more tense scenes are what drives the momentum and keeps us on edge.  While the dialog is clear throughout the film, it could have benefitted if there was a more enthusiastic sound bed laid onto the track.  We definitely get the claustrophobic feel of the house as the voices tend to come through all the speakers giving us a sense of space, but despite the nice track, it’s not enough.

Audio Commentary with Director Karyn Kusama and Writers Phil Hay & Matt Manfredi:  Here we get a lot of behind-the-scenes information about the making of the film as well as the motivation for making the film.  The three manage to carry the commentary without many dead spots, though this is a track I’d only recommend to the fans of the film.

The Making of The Invitation: (10:00) A small behind-the-scenes look at the making of the film, though mostly this is filled with interviews with some cast and crew.

While I may not be wildly enthusiastic about the film, my problem with it is largely with its lack of bringing any fun into the film.  The entire time the film feels like it is being restrained and never wants to take any chances.  For those that don’t mind a slow-burn thriller, maybe this will be a good fit for you, though for me this is an invitation I’d sit out.

Brent Lorentson is a horror writer and film critic based out of Tampa, Florida. With a BA in Digital Film, he co-wrote and co-directed Scavenger Hunt. His short stories have appeared in various horror anthologies. In 2019 his short script Fertile Blood will be a part of the anthology horror film Slumber Party. He is currently working on his first novel A Dark and Secret Place set to be released in late 2019. Favorite Films: Taxi Driver, Fight Club, I Saw the Devil, The Wild Bunch, Dawn of the Dead, A Clockwork Orange, Pulp Fiction, Heathers, The Monster Squad, and High Fidelity.
The 100: The Complete Third Season (Blu-ray) Jason Bourne