Posted in: Disc Reviews by Gino Sassani on August 12th, 2016 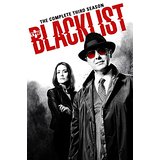 James Spader is Raymond “Red” Reddington. If you have not yet watched an episode of The Blacklist I will tell you from the beginning that you just can’t start here. Season 3 hits the ground running as the consequences of some major storylines from the previous year start to play out. I found myself having to take the time and catch up on Season 2 because we didn’t get that year to review. It was clear to me from the start that there was no way to truly enjoy this release if I wasn’t caught up. The trouble I go through to keep you guys informed. It’s a tough job but someone has to do it. So, if you’re not up to speed this is your chance to pick up all three seasons and do some serious binge watching. Make sure you stretch every now and again. Keep yourself hydrated and avoid the fatty/sugary junk foods. It’ll be worth it because The Blacklist takes you on one heck of a three year run and I’m already looking forward to season 4. But go no farther if you’re not up to speed.

If you’re still with us then you know that Liz Keen (Boone) shot the country’s Attorney General because he was part of The Cabal and threatened her future. She’s also been framed for a terrorist attack that she did not commit. Now her partner Donald Ressler (Klattenhoff) is in charge of the task force because Cooper (Lenox) is also implicated in the crimes of Keen and Reddington. Ressler is not totally convinced she is guilty and hopes that she’ll be cleared in the courts. But he is completely dedicated to bringing her in. The rest of the team is rather divided. None of them believe she is guilty and they end up being drawn in by Reddington to help behind Ressler’s back. Aram (Arison) has already gone too far over the line but it has earned him the gratitude of Reddington. It’s a chit he has to call in before the season ends. Samar (Marno) uses her Mossad connections to help to the point that Ressler has her fired.

This makes for a big break from the show’s usual formula with Keen on the run. She also discovers she is pregnant and wants to get back together with Tom (Eggold) This is something Reddington wants to stop at all costs. It makes for a desperate couple who end up going to serious extremes to beat Reddington. It all leads to a twist ending that you’ll certainly see coming but is good stuff anyway. Keen has regained some memories and now understands why Reddington has been keeping her under his protection. She was the child of a Russian KGB agent. That kind of history isn’t going to help her with the terrorist charges. She not only has to run from the cops but there’s a huge bounty on her head placed there by an add on the dark web from ordinary people who want to take down a terrorist. This brings out all kinds of killers to collect the growing reward. All of this takes up the first half of the season.

In the season’s second half there is a little bit of a return to the usual formula. Keen is back but not as an agent. She’s now a consultant just like Reddington. It’s the birth of Keen’s daughter that makes up the biggest part of the second half.

There are a couple of strong new characters this season. Matias Solomon is played by Edi Gathegi. He plays a hit-squad leader who is hired to take capture Liz for The Cabal. That’s after he was hired to kill Reddington. In the second half of the season he ends up being an ally to the task force to finally bring down the bad guys. Before that he starts the year by taking Reddington’s “man Friday” Dembe hostage to try and get to Reddington. Another standout this season was Adriane Lenox as a Reven Wright. She’s high up in the Cabal chain and takes on much of the attempts on the lives of Reddington and Keen. Hawaii 5-O’s Christine Lahti is one of the leaders of the Cabal. You might remember her as Steve’s spy mother on 5-O but here she’s about as ruthless as they come.

Of course, the standout performance here is James Spader. Red isn’t unlike the lawyer he played on Boston Legal and The Practice. He’s got that same cocksure attitude and a rather offbeat, irreverent sense of humor. The real difference is that Red is not a good guy at all. He may be helping save lives here, but there’s never any doubt that he’s serving his own agenda here throughout. He’s also eager to be close to Liz, and we know there’s more to their connection than meets the eye. He’s also a brutally violent man. He kills without flinching and with very little provocation. He’s the kind of character that could not have existed on television before the likes of Tony Soprano or Vic Mackie. Spader pulls this complicated personality off flawlessly. He’s like that car wreck. You just can’t keep from looking. The character and performance are powerfully compelling. Once you do look, it’s near impossible to look away. He can keep your attention during even the most ordinary of tasks. Perhaps it’s our own survival instinct. In real life he’s the kind of guy you can’t afford to take your attention from for even a second. Some of the character was based on real-life FBI wanted criminal Whitey Bolger.

Each week the team is still introduced to another person on Reddington’s blacklist. While on the run Reddington has the need for the task force to locate someone on the list. This time they all fit into the puzzle of either exonerating Keen or helping them escape capture. The episode titles refer to the name of the criminal and a number which corresponds to their place on the list. The criminals are the kind of people who keep other criminals in business, usually providing a vital service to the underworld. Reddington knows these people through his own 20-year criminal activities. They’re so good at their jobs that most of the time the law doesn’t even know a crime was committed, let alone who committed it. High-tech erasers, assassins, genetic manipulation, explosives and terrorists.

One of my favorite episodes of the season is actually very different from every other episode of this show. Reddington takes a trip to Cape May where he once tried to save Keen’s mother from drowning many years earlier. It’s the off-season and he breaks into a resort to stay in while he’s there. This episode isn’t named after a blacklister and there’s no number. It’s called Cape May and it only stars James Spader of the regular cast. It’s one of the best emotional rides of the series and gives us a chance to see Reddington in a vulnerable way we just don’t get to see him otherwise. Even when he does feel that way he’ll never show it around people. Here he turns inward for perhaps the first time in the series. That episode alone is worth the price of admission here.

Each episode is presented in its original broadcast aspect ratio of 1.78:1. The 1080p image is arrived at with an AVC MPEG-4 codec. This high definition image presentation delivers a clean sharp image with solid black levels. While there are usually 5 episodes on each disc we get a strong enough bitrate to provide nice detail ands near reference colors. Fleshtones are spot-on and the many close-ups provide some of the sharpest detail. With an actor like Spader this is where the real performance art can be found. There are a lot of gunfights and explosions here and you get smooth action. There’s not a lot of texture here as it’s a pretty glossy production.

The DTS-HD Master Audio 5.1 is mostly driven by the dialog that is until there’s a massive firefight. Then your surrounds come alive and even the subs here deliver a bit of the thunder that helps to immerse you into these moments. The subs also add some depth to that dialog giving it the kind of accent that adds some of the authority behind Spader’s delivery.

All About Aram: (10:49) The Aram character gets a profile piece here.

Outside The Box – Making The Blacklist Comic Book: (8:42) Nicole Philips is a writer on the show and she develops the scripts for the two comic book series that remain part of the show’s continuity and canon.

Red’s Gems – Favorite Lines From Season 3: (7:04) Just what it says. These are cast and crews’ favorite one-liners from Spader during the year.

It’s quite nice that the show used this season to shake up the formula a little. When a series is so dependant upon a single actor’s persona you really need to do something like this. Otherwise there is a huge danger of the show growing stale as soon as the audience tires of the character. These guys are doing a very good job of moving the show all of the time to keep it from getting static. It’s like a shark: Swim or die. If they just keep leaning on Spader ratings will fall and from there “It keeps getting worse”.

Gino Sassani is a member of the Southeastern Film Critic's Association (SEFCA). He is a film and television critic based in Tampa, Florida. He's also the Senior Editor here at Upcomingdiscs. Gino started reviewing films in the early 1990's as a segment of his local television show Focus. He's an award-winning recording artist for Omega Records. Gino is currently working on his 8th album Merchants & Mercenaries. Gino took over Upcomingdiscs Dec 1, 2008. He works out of a home theater he calls The Reel World. Favorite films: The Godfather, The Godfather Part II, The Body Snatcher (Val Lewton film with Karloff and Lugosi, not the pod people film), Unforgiven, Gladiator, The Lion King, Jaws, Son Of Frankenstein, The Good, The Bad And The Ugly, and Monsters, Inc.
11.22.63 (Blu-ray) Supergirl: Season 1 (Blu-ray)