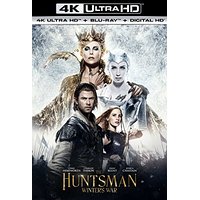 In Winter’s War, we quickly get reacquainted with evil sorceress Ravenna — who was vanquished by Snow White in the previous film — and her murderous ways. We’re also introduced to her younger sister Freya (Emily Blunt), who is in love with a married duke and eventually gives birth to their daughter. Shortly after Ravenna’s Magic Mirror gives the sorceress a troubling prophecy about Freya’s child, the infant is killed by the duke. Freya, blinded by rage, unlocks her own magical ability and kills the duke with her previously untapped ice powers. The incident hardens Freya’s heart for good, and she leaves to establish her own lonely ice palace in the North. (Luckily, the cold never bothered her anyway.)

To help achieve her conquests, Freya assembles the children of nearby lands and trains them to become a fearsome, heartless army of hunters. (“Love is a sin” in her kingdom.) This is when we’re first introduced to Eric (Chris Hemsworth), one of the most talented huntsmen in Freya’s army along with Sara (Jessica Chastain). Despite Freya’s edict, the two fall in love and secretly marry, which leads to tragedy after the Ice Queen discovers their betrayal. Following what basically amounts to a 30-minute prologue, Winter’s War effectively becomes a sequel to Snow White and the Huntsman, as Eric is charged by King William (Sam Claflin, one scene and done) with finding the missing Magic Mirror.

You might be wondering where Snow White is in all of this. Well, Kristen Stewart — who previously starred as Snow — was dropped from the sequel after controversy erupted over her affair with Rupert Sanders, the first film’s married director. (Snow White briefly appears via archival footage and body double here.) At the risk of sounding flippant, I didn’t think K-Stew sampling her director’s poisoned apple was the worst thing that could’ve happened to this wannabe franchise: the surly actress was miscast as Snow White, who may have been fiercer in that incarnation but still needed to project ethereal beauty. Snow White and the Huntsman was a decent hit for Universal — nearly $400 million worldwide gross vs. a $170 million production budget — but not a runaway success by any means. In other words, a sequel getting made wasn’t exactly a slam dunk. However, a sequel that excised the original movie’s weakest link suddenly seemed more promising.

Then again, Winter’s War‘s visuals are the least of its problems. I don’t mind that this film tries to inject more moments of levity. Hemsworth is given more space to do his Thor-ish charming-lunkhead routine. And returning cast member Nick Frost (as Nion, the only dwarf from the first film who could be talked into returning) has some amusing moments alongside Rob Brydon (as Griffy, Nion’s opportunistic half-brother) and Sheridan Smith (as Bromwyn, the feistier and funnier of the two female dwarves introduced here). However, those lighter moments don’t fully mesh with the darker, straightforward story being told.

The bickering amongst humans and dwarves carrying an all-powerful golden object that has the potential to corrupt and destroy them often makes this feel like low-budget Tolkien. The problem is this film doesn’t come close to achieving the grand, immersive scope that Peter Jackson captured with his Lord of the Rings and Hobbit trilogies. Even the film’s gifted new additions are largely wasted. Blunt absolutely has the presence to go toe-to-toe with Theron, but is mostly reduced to coldly moping around her ice castle. She still fares far better than Chastain. Between Sara’s Scottish accent, Chastain’s flowing red hair, and the character’s butt-kicking bona fides, you can easily talk yourself into Sara being a human version of Princess Merida from Brave. Unfortunately, every time Hemsworth and Chastain flirt, you’ll mostly be wondering which one of them is butchering their Scottish accent the most. (***SPOILER ALERT*** It’s Chastain.)

The Huntsman: Winter’s War is presented in it’s original aspect ratio of 2.40:1. The ultra-high-definition  image is arrived at by an HEVC codec. The best thing I can say about this ultra-high-definition image presentation is how natural the colors are in the forest scenes. The folks in charge of this transfer resisted the common temptation to oversaturate the colors. With HDR there is so much more range to color that it’s apparently hard to resist the temptation to have them pop too much. Greens in the forest are wonderfully natural. Blue is another color that does pop rather nicely. From the guard’s cloaks to eye shadow on an early character, the color stands out. Black levels are superior here. There’s a rainy forest night that allows such fantastic detail in the dark. You really can tell the forest from the trees. Details are a plus in this exotic world. Texture suffers a bit because of the great use of CG. Inside the Ice Queen’s domain there is a cold blue sheen that tends to gloss over textures. The image stands out as a rather smartly designed 4K transfer that takes full advantage of the resolution without going too far. It’s my hope more studios will follow this model.

The DTS-X defaults to a 7.1 audio presentation. The surrounds are not always aggressive, but instead do a nice job of immersing you quite solidly into the action. You’ll catch the shout of a bird or the breaking of a cup in the additional surrounds. They are nicely isolated and pierce through the mix without overtaking everything else in the process. Balance is the key here, and it’s the strong point, to be sure. Dialog comes through perfectly placed. The subs offer the occasional room shake, but they also serve a purpose in even the more quiet moments of the film. They add depth and a bit of dynamic accent to everything from the wonderful James Newton Howard score to the dialog. You will find yourself surrounded by the action and totally brought into the experience.

The only extras are found on the Blu-ray copy, which is the same as the original Blu-ray release.

Deleted Scenes: (8:56) There are five with a play-all option. You also have the option to have a director’s commentary.

Two Queens And Two Warriors: (7:21) This is the first of a five-part making-of feature that must be played in separate parts. This segment focuses on casting and the main characters. The actors talk about their characters and working with each other. There’s plenty of behind-the-scenes footage, particularly of the stunt choreography.

Meet The Dwarves: (8:10) This segment focuses on the four dwarf characters. The behind-the-scenes footage demonstrates the various ways the film dealt with forced perspective.

Magic All Around: (8:44) This is the f/x segment. Plenty of pre-viz and various layers of f/x.

Love Conquers All: (5:57) This feature shows how much fun the cast and crew had. Apparently it was a fun set and everyone loved everyone else.