Posted in: Disc Reviews by Brent Lorentson on October 1st, 2016 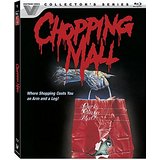 “I guess I’m just not used to being chased around a mall in the middle of the night by killer robots.”

It’s October, and that means it’s the start of 31 Nights of Terror, and this year we’re kicking things off with one of my guilty pleasures growing up, Chopping Mall.   This came out at a time when slashers were pretty much a dying genre, but there was still a demand to have horror films up on the big screen.  I never got to see this in theaters, but I remember the VHS box art from my local mom-and-pop video store.  The idea of the robotic hand clutching a shopping bag with a head on it was something that gripped the teenager in me.  Sure, the film is nothing like what the box art teases, and the original title Killbots is a far more accurate title, but from a promotional standpoint, in the vein of the old Roger Corman films, I get why they did this.  So what’s it all about?  Well, grab your keys, grab your wallet, because we’re about to take a trip to Park Plaza Mall and see what it’s all about.

Things start off fun as we see a would-be burglar attempt to rob a store. His attempt is thwarted by the security of the future, an automated security guard that safely takes down the criminal.  We quickly see that this is simply a promotional ad being shown to owners of shops at the mall as they all get their first glimpse at the new security system.  The design looks like a bit of a cross between Wall-E and Number 5 from Short Circuit, so not really the most intimidating of robots, but these guys mean business once they have their sights on you.

The film skips ahead to sometime later when the robots are running security in the overnight hours.  It just so happens that several of the employees at the mall have decided that they are planning a late-night party at the mall, not knowing just how bad a decision this is going to turn out to be.

Alison (Kelli Maroney) is our typical lead, the good girl who gets roped into going to a party she doesn’t really want to be at.  She’s being set up on a blind date with Ferdy (Tony O’ Dell), who is your standard geeky guy from the 80’s that we all root for getting the girl in the end.  This is one of my favorite couples from 80’s horror films, because not only do I feel they’re a couple that would actually work, but they were a couple we geeky guys could relate to.

Barbara Crampton has a substantial role in the film, and it is one of those draws I have towards this film.  Ever since I first saw Re-Animator I’ve had my boyhood crush on her, and she looks amazing here as well and she puts on a heck of a performance that to me shows why she’s one of the scream queens who continue to rule the genre in my opinion.  But the film doesn’t stop there with horror icon appearances; we also get scenes with the Tall Man himself, Angus Scrim, and Dick Miller, who I’ll forever love from Gremlins.

As it would seem with most technology, going back as far as Mary Shelley’s Frankenstein, it’s lightning that is responsible for things coming alive and doing bad things.  It’s a lightning strike at the mall that causes the robots to short-circuit and develop an immediate thirst to kill any humans that cross them.  It’s silly and makes no sense, but this is a film that’s tapping into the 50’s killer-robot sci-fi films as well as the old school horror films from Roger Corman.  If you can’t embrace the camp of those films or even see the playful charm they have, I’m not so sure you’ll be able to embrace this film either.

What separates this film from a lot of slashers at this time and before it is that this is one of the first horror films in which we get to see the would-be victims not waste time in fighting back against their pursuers.  The cast doesn’t just sit around or run away from the robots just waiting to be killed; they break into a guns-and-ammo store in the mall cleverly named Peckinpah’s and arm themselves.  As the robots and humans lose their lives in the battle to survive the night, I always find myself wishing there was more.

What I love about this film to this day is that it was done with practical effects and still holds up.  The robots are all real and remote-controlled; the kills are makeup FX and clever editing and creative camera shots.  It’s that level of “realism” that makes a lot of this film work for me, knowing this is a mall and not some studio soundstage.  Nowadays if this film were to be made, we’d have CGI robots, and no matter how real they might look, there is something to be said about seeing practical elements interacting with characters on the screen.

The film only runs 77 minutes, and it ends far too soon for me, but this is an instance where I view this as a compliment that I didn’t want the story to end.  This is a time capsule to a time that no longer exists, and I feel you can easily say they don’t make them like they used to anymore.

Chopping Mall is presented in the aspect ratio 1.85:1.  The 1080p image is arrived at with an AVC MPEG-4 codec at an average of 24 mbps.  I’ve had both the VHS copy and the DVD copy of the film; this is easily the best-looking format I’ve gotten the chance to view this film in.  There are some minor compression issues that are more obvious in the darker sequences as well as some grain in some of the effects shots.  These issues would be more of a problem in a modern film, but personally this is just a reminder that we’re watching a film from the 80’s.  There are plenty of other scenes where we get to see the colors pop; the film’s opening credit sequence is the most memorable for this.  In the brighter sequences, especially when we see the mall busy with people or scenes where it is better lit, there is a lot of detail that is captured. The head explosion scene is perhaps one that delivers more in this format as we get to see more detail in the chunks of gore that make the scene more gruesome than I first remember.

The DTS-HD Master Audio 2.0 track is heavy on the score by Chuck Cirino and delivers clear dialog throughout.  These are the two more important factors you need for this track, but anything midrange is lost, so if there were added sound FX for certain kills, well, that seems to of been lost here. We get some nice gunshot FX as well as some explosions that service the sequences nicely but nothing that allows for a too immersive experience.

Audio Commentary with Director/ Co-Writer Jim Wynorski, Actress Kelli Maroney, Co-Writer/2nd Unit Director Steve Mitchell:  So much information here about the making of the film and how it came together.  There really isn’t a dull moment on this track, and is a fun listen for any of the big fans out there.

Audio Commentary with Nathaniel Thompson and Ryan Turek: This is a track that more fans will be able to connect with considering it is done by real fans of the film who are film historians and authors.  I liked this one; it felt like how I’d imagine a track would be if I made one with one of my horror buddies.

Audio Commentary with Director/Co-Writer Jim Wynorski and Co-writer/2nd Unit Director Steve Mitchell:  This is a track recorded for a previous release of the film back in 2004. There are a lot of stories recycled, but this is still a fun track to listen to if you are interested in hearing about their influences and references on the film.

Isolated Score Track:  Here we have one of my favorite additions to the disc.  Here we really get to discover how fun and great the music track by Chuck Cirino is.  If you ever wondered how much music can affect a film and make a difference, this is one of those fun tracks to check out.

“Back to the Mall” (26:29) Here we get the cast and crew together to discuss their experiences with not just making the film but the film’s lasting popularity over the years.  It’s nice seeing everyone expressing their love for the film. It would have been nice if there was behind-the-scenes footage or at least footage from the making of the film, but I understand that most likely it doesn’t exist.

“Chopping Chopping Mall” (8:19) A brief conversation with the editor of the film, Leslie Rosenthal.

“The Killbots” (12:11) A little feature about the killer robots in the film, how they were used in the film, and reactions to how well they worked.

“Scoring Chopping Mall” (11:04) A conversation with Chuck Cirino about how the film’s “legendary” 80’s electric score came together.  Call me crazy, but I do have a soft spot for this score, and I think it’s great we get an interview with this guy.

“The Robot Speaks!” (2:12) A rare 10 question interview with one of the Killbots. It’s silly and fun, the kind of feature you’d expect with this release.

“The Lost Scene” (3:01) A brief discussion about a scene in the script that was found, but never shot.  While it’s nothing that would have affected the outcome of the film, it’s a fun little scene that unfortunately was never shot.

“Army of One” (6:01) This is one of the more original features I’ve ever seen.  A conversation with a huge fan of the film.  Not every film gets a fan as loyal as this one; it’s nice to see the man getting his moment in the spotlight.

“Chopping Mall: Creating the Killbots” (15:41) Another look into the Killbots, only this time we are given more information about the concept behind their creation.

Considering this is one of those gems of the 80’s that I didn’t know had the cult following that it does, the bonuses on this disc are definitely a treat.

Kudos to Vestron Video for putting all the time and effort into this Blu-ray release.  While this may not be a classic for most, for fans like myself this is the kind of release we’ve waited a long time for.  As we are rolling into the Halloween season, this is one of those perfect titles to get yourself and friends together to have some fun while throwing back a few drinks.  This is a trip to the mall that is worth taking.

Brent Lorentson is a horror writer and film critic based out of Tampa, Florida. With a BA in Digital Film, he co-wrote and co-directed Scavenger Hunt. His short stories have appeared in various horror anthologies. In 2019 his short script Fertile Blood will be a part of the anthology horror film Slumber Party. He is currently working on his first novel A Dark and Secret Place set to be released in late 2019. Favorite Films: Taxi Driver, Fight Club, I Saw the Devil, The Wild Bunch, Dawn of the Dead, A Clockwork Orange, Pulp Fiction, Heathers, The Monster Squad, and High Fidelity.
Deepwater Horizon “31 Nights Of Terror” Contest: Win 6 Plots On DVD From Lionsgate Home Entertainment