Posted in: Disc Reviews by Jeremy Butler on October 19th, 2016 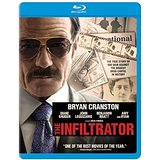 Growing up one of coolest jobs I thought was out there was undercover work. Not to diminish all the threats to one’s well-being associated with that profession, but come on, who didn’t want the opportunity to reinvent themselves as someone else entirely. Undercover affords that opportunity. That said, it does not come without a cost, and that cost is explored thoroughly in The Infiltrator, a based on a true story tale about a U.S. Customs agent who infiltrates the most successful and equally dangerous drug cartel led by the one and only Pablo Escobar. An interesting little tidbit that I was unaware of before the opening credits was that this film was shot right here in the Tampa area, which provided recognizable environment and a chance to pick out familiar territory.

The Infiltrator follows Robert Mazur (Bryan Cranston), a seasoned agent with the United States Customs Service with a talent for undercover work. After successfully completing an operation, he finds himself thrown back into the mix for possibly the biggest operation he has ever every undertaken: infiltrating the money laundering operation used to clean the proceeds for the Medellin Cartel, led by Pablo Escobar.

Partnered with another Customs agent, Emir Abreu (John Leguizamo), Mazur walks a thin rope as he works to grow closer to his targets and work his way up the ranks, all the while trying to avoid the suspicions of those he would attempt to bring down (Benjamin Bratt). The longer he spends undercover, his relationship with his family begins to suffer, and the line between who he is and who he is pretending to be starts to fade.

I want to start this review by saying this is the best character-driven story that I have seen to date. I can’t stress how great a job the cast did in their individual roles as well as collaboration. First person I want to mention is John Leguizamo, because he was the breakout star in my opinion. Cranston without question is the main character, but when Leguizamo is on screen, he steals the show, providing comic relief that helps lighten the tone of the thriller. I won’t give away any of his material, but suffice it to say, he was hilarious. Next up is Benjamin Bratt; now, given that he was on the wrong side of the law, he exemplified for me that not everyone breaking the law is inherently evil. To me, he was a family man and displayed a vulnerability that dare I say had me somewhat rooting for him by the end. Now on to the person that everyone has been waiting to read about, Mr. Bryan Cranston. It is through his eyes that I learned the hardships that come with living a double life. He provided the fear and regret that fueled the most pivotal scenes of the film such as when the job begins to take a toll on his relationship with his wife and kids and as he grows closer to his targets and realize that the differences between him and his targets are more a matter of degree rather than category.

I have it on good authority the historical accuracy of this film, which is pleasing, as this is one of the most compelling stories that I have seen this year. I entered this movie with little more than a thimble of knowledge regarding this police operation, and not only did I enjoy myself, I got a history lesson as a bonus. Cinematic-wise, it keeps up a good pace, balancing the action and dialog in such way that I never found myself bored. There are a few moments where I was able to predict what would immediately follow, but they were few and far between.

The Infiltrator in its original aspect ratio of 2.40:1. The 1080p image is arrived at with an AVC MPEG-4 codec at an average 35 mbps. This high-definition image presentation was a bit of a treat for me because of the Tampa locations. That’s where I live, and the image gave me some nice details on the old familiar spots. The film uses an almost documentary style that delivers clean and never exaggerated colors and light. There’s a bit of a nice grain element added to the night scenes, and there’s still some nice deep black levels to go along with all of that.

The DTS-HD Master Audio 5.1 is not really going to blow you away with aggressive surrounds or even very deep subs. The audio presentation goes for a rather subtle but realistic look. Dialog is heavy here and given top priority. There aren’t any huge gunfights or terribly explosive action scenes here. This is all about the characters, and everything else, including the score, plays very low key. It’s an appropriate approach and a clean, clear audio presentation.

Deleted Scenes: (8:52) There are five with a play-all option.

The Three Bobs: (3:17) A profile of the three sides to Bryan Cranston’s character.

How To Infiltrate: (5:49) For some reason this short feature is broken into three parts (The Psychology, The Identity and The Danger). Fortunately, you can use the play-all option.

In conclusion, The Infiltrator is destined to be a critical success in my humble opinion, and I recommend that suspense lovers make their way to the video store for an experience that I’m sure they will not regret. Compelling story and a top-notch cast; what more can you ask for?

Jeremy Butler is a film school graduate of the International Academy of Design and Technology. He is been writing for Upcomingdiscs since 2012; however, movies have played a big part of his life for much longer. Favorite genres include horror, science fiction/fantasy, and comedy. Favorite movies are V for Vendetta, Boondocks Saints, Kiss Kiss Bang Bang, and The Godfather.
“31 Nights Of Terror” Upcomingdiscs First Annual Halloween Decorations Contest Blood Father (Blu-ray)