Posted in: Disc Reviews by Brent Lorentson on October 19th, 2016 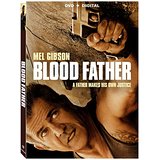 I can’t be the only one who misses seeing Mel Gibson in a tent pole movie for the studio every year.  Sure, he said some rotten things, but does it matter what he does in his personal life?  The man still is a great actor and an even better director.  Hollywood has always been forgiving of its talent; it’s a system that seems to enjoy seeing talent make a comeback and do some amazing work.  What it seems is that sometimes we forget that these icons on the screen are human, and they make mistakes and do stupid things and they have to own these experiences for the rest of their lives in the spotlight.  I bring this up simply because when you look back at Mel Gibson and his downfall, Blood Father seems in many ways a reflection of the past decade for Gibson, minus the body count, of course. Rather than just roll over and phone in some roles like many of his contemporaries have, Gibson has been finding roles that continue to remind me why audiences connected so much to his work.

John Link (Gibson) is an ex-con and also a recovering alcoholic who struggles every day to make up for his past mistakes.  He’s lost his wife and hasn’t seen his kid in years; he manages to get by running a tattoo shop out of the trailer he also lives in.  He’s living on hard times but owns up to his mistakes and is working towards the day he can be forgiven for those mistakes.  His sponsor, Kirby (William H. Macy), is pretty much his only friend and does what he can to keep John on the right path, but things get more than a little complicated when John hears from his daughter, and she is asking for help.

Lydia (Erin Moriarty) is a teenager who has managed to get herself tangled up in a violent mess due to her boyfriend being mixed up with a drug cartel.  She goes on the run after choosing to shoot her boyfriend rather than kill an innocent woman.  With nowhere to turn and out of money, she reaches out to her father.

What works for this film is the relationship between John and Lydia.  These two have been through hell because of the poor decisions they’ve made in their lives, but as the film goes on, we see how much the two need one another.  We see how these two managed to go on with their lives with their contrived theories on who the other is, and when they meet and get to know each other they see how different they are.  It breaks John’s heart to see his daughter making the mistakes he did, but he’s willing to do whatever it takes to get her back on the right path.

The film turns into a bit of a road movie as the father and daughter are on the run from the cartel as well as the police.  There’s just enough action to keep most action fans entertained, but this is a film that is more substance than style and does rely heavily on the performances.  Remove Gibson from this film and insert anyone else, I don’t see this having the same effect.  This is where the film also suffers. There isn’t much new being brought to the story, it’s very much a retread of a story we’ve seen before.  Thankfully director Jean-Francois Richet keeps things tight and gritty with his style and knows when to keep the camera on Gibson and let him deliver an admirable performance.

Blood Father is presented in the aspect ratio 2.39:1.  The 1080p image is arrived at with an AVC MPEG-4 codec at an average of 20 mbps.  The film is mostly filmed in some very desert-looking regions so the color palette is filled with a lot of browns, reds, and yellows.  There is a lot of warmth that comes through with this image, and we do get a lot of detail that is captured.  For the few night shots, or scenes shot in darker locations, we get some decent black separation.  There were no compression issues or artifacts that I could see.  While it’s a film that doesn’t offer much of an opportunity to shine with detail or showcase the highs and lows in color, overall it has a warm, natural look that they were after.

The DTS-HD Master Audio 5.1 track is very much what you’d expect from an action film.  The dialog is clear throughout, but the rumble of the motorcycles and the blasts of the guns being fired is what we are after here.   While this is far from the most immersive mix I’ve heard, for a smaller film release as this is, the action scenes deliver enough punch to satisfy most viewers.

Lost Souls: On the road with Blood Father: (27:50) It’s nice to finally see a well put together behind-the-scenes feature that is filled with interviews as well as making-of footage.  We get a lot of information on how the film came together.

While I did enjoy the film and feel Mel Gibson was great, the film still falls into a very familiar action film story.  As a performance vehicle for Gibson this is a reminder as to why he owned the opening weekends when his starring vehicles would debut before all his personal drama ruined his career.  This is a no-brainer pick if you’re looking for an action film simply because of Gibson; he’s getting up there in years, but he still knows how to deliver a performance.

Brent Lorentson is a horror writer and film critic based out of Tampa, Florida. With a BA in Digital Film, he co-wrote and co-directed Scavenger Hunt. His short stories have appeared in various horror anthologies. In 2019 his short script Fertile Blood will be a part of the anthology horror film Slumber Party. He is currently working on his first novel A Dark and Secret Place set to be released in late 2019. Favorite Films: Taxi Driver, Fight Club, I Saw the Devil, The Wild Bunch, Dawn of the Dead, A Clockwork Orange, Pulp Fiction, Heathers, The Monster Squad, and High Fidelity.
The Infiltrator (Blu-ray) “31 Nights Of Terror” Contest: Win Lucifer: The Complete First Season From Allied Vaughn