Army Of One (Blu-ray)

Posted in: Disc Reviews by Brent Lorentson on November 23rd, 2016 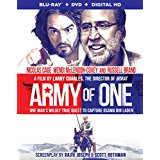 It’s been a while since Nicolas Cage has been in a big studio-released film.  It doesn’t mean he’s doing bad movies; it just means he’s not doing any tent-pole releases that flood the multiplex.  Seeing Nicolas Cage in a film like Army of One is simply a snapshot of how modern cinema has to evolve for better or for worse.  Really, I don’t mean to come off as though this is a bad film or inferior to any other films past or present, but ten years ago this is a film that would have had a much wider release and would easily have gotten more attention.  After all, who could resist Nicolas Cage in a film helmed by the director of Borat?

I vaguely remember hearing the story in the news. American Gary Faulkner (Cage) decides to set off on his own to capture Osama Bin Laden and bring him back to the US.  It was a story that was a little more than a blip in the headlines, but thankfully we have Army of One that delivers a film that embraces the insanity of the scenario and takes some liberties with the true story, all in the name of comedy.

Faulkner at first glance is your typical red-blooded American who is angry about the attacks on 9-11 and is frustrated that Bin Laden has managed to evade capture for so long.  Then along comes God (Russell Brand), and he approaches Faulkner with the demand that he is to travel overseas and hunt down and capture Bin Laden.  The details are left up to Faulkner to figure out, but the message is clear, and this sets Faulkner off on his Don Quixote-esque adventure.

Just as we think the plan is simply laid out — after all he’s been kicked out of his friend’s house and has nowhere else to stay or anything better to do — this is when he bumps into an old high school crush, Marci (Wendi McLendon-Covey), and what do you know, the two hit it off.  Factor in that Marci has a disabled child of her own, and this story becomes a ticking time bomb you just can’t look away from, because there is simply no way this can end well.

Cage does what he does best and delivers a high energy performance, but this go around it’s as though the Cage Manic Meter has been cranked as far as it can go.  He carries this film and helps make even the impossible to believe moments seem plausible.  The accent Cage puts on to play the part is a bit much at times, but that simply goes along with who the character is, someone that is over the top.  My biggest problem with the film, though, is that it stretches on too long; it’s a joke that seems to have no punch line.  The story does seem a bit forced and contrived at times, but this is one of those instances where  I can give the film a pass; after all, we’re talking about a film with Cage wanting to hang-glide into Pakistan with a samurai sword to capture (at the time) the world’s most wanted man.

Army of One is presented in the aspect ratio 2.39:1.  The 1080p image is arrived at with an AVC MPEG-4 codec at an average of 30 mbps.  The film has an unimpressive look to it and appears relatively flat for the most part.  There seems to be a bit of a haze in shots; this is something more noticeable in the scenes at the casino.  While reds and blues seem to be very vibrant, the overall color scheme is bland.  This is shot for comedy, and for the most part this has a very “shot on digital” look that just doesn’t impress.

The DTS HD-Master Audio 5.1 track is a bit lackluster.  This is a dialog-heavy film, so most of the audio comes from the front speakers.  The dialog is clear, but at times the voice Cage uses along with his sporadic shouting can seem a bit much.  When we see Faulkner first encounter God, this is when we finally get to hear the range of the speakers put to use as we hear the voices come back to front.

The Making of Army of One: (7:07) This is more a collection of interviews with the cast and crew discussing the film.  Nothing all that impressive here or anything revealing about the film.  It would have been nice to have had some input from the real Faulkner.

While the film has its amusing bits, I had a hard time sticking with this film.  This felt more like a comedy bit than what I’d expect an entire film to revolve around.  There are funny parts, but it’s only because Cage simply takes this character so over the top.  If anyone else had this role, the film would be a complete flop; as it is now, it’s a charming film for those Nicolas Cage fans who enjoy seeing him in his more off-kilter roles.

Brent Lorentson is a horror writer and film critic based out of Tampa, Florida. With a BA in Digital Film, he co-wrote and co-directed Scavenger Hunt. His short stories have appeared in various horror anthologies. In 2019 his short script Fertile Blood will be a part of the anthology horror film Slumber Party. He is currently working on his first novel A Dark and Secret Place set to be released in late 2019. Favorite Films: Taxi Driver, Fight Club, I Saw the Devil, The Wild Bunch, Dawn of the Dead, A Clockwork Orange, Pulp Fiction, Heathers, The Monster Squad, and High Fidelity.
Tuesday Round Up: November 22, 2016 Star Trek: The Animated Series (Blu-ray)