Posted in: Disc Reviews by Gino Sassani on November 24th, 2016 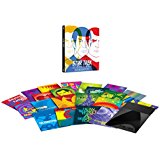 “Space…the final frontier. These are the continuing voyages of the Starship Enterprise. Its five-year mission: to explore strange new worlds, to seek out new life and new civilizations, to boldly go where no one man gone before!”

Of course, we never did get five years from that original show when it ended after just three years in 1969. The new film series has tried to fix that for us. The latest film picks up the five-year mission just after three years have gone by. It’s a double homage to the original show. The number of days reflected the series start, and it picks up where they left off…kind of. But we did get a fourth and partial fifth year of the original voyages, and while it has never been considered truly canon, the original cast joined many of the original writers in 1973 to bring Star Trek back to the small screen. It was Filmation’s Star Trek: The Animated Series, and it appeared on Saturday mornings from 1973 until 1974.

The animated show might not be considered as part of the franchise continuity, but it actually had the closest ties to the original series more than anything that came after it. All of the originals returned with the exception of Walter Koenig as Chekov. He did end up writing one of the episodes. His omission wasn’t any kind of disagreement on either side or an unwillingness to participate. It all came down to budget. Instead James Doohan, Majel Barrett, and Nichelle Nichols did most of the additional voices on the episodes. Doohan in particular had been known as a voiceover guy before his turn at Scotty. He had initially auditioned several ethnic accents before Roddenberry decided to use the Scottish brogue.

The show was also directly linked to the first series in several other ways. Many of the episodes were direct sequels to earlier live-action episodes. The Guardian of Forever returns in Yesteryear, where Spock accidentally erases his own history after a trip through the portal. The episode also features Mark Lenard reprising his role as Spock’s father, Serek. More Tribbles More Troubles saw the return not only of the furry favorites, but Stanley Adams as the voice of Cyrano Jones and writer David Gerrold who also penned the original episode. Once Upon A Planet saw the ship return to the amusement world from Shore Leave. Harry Mudd is voiced once again by Roger C. Carmel in Mudd’s Passion. D.C. Fontana, who had written many of the Vulcan culture aspects of the earlier show, returned here as the script supervisor. She pretty much made sure that the scripts fit the show’s continuity to that point.

The series also contributed to the future of the franchise. While it was always in the writer’s bible, this show was the first on-screen reference to Kirk’s middle name, Tiberius. The cartoon introduced us to the franchise’s first holodeck, something Roddenberry had always envisioned for the 1960’s series but never had the budget for. Of course, it would become a mainstay starting with The Next Generation. Spock’s coming-of-age ritual here is mentioned again in Star Trek: Enterprise. The cartoon might not have been canon, but it included and contributed aspects of the franchise that do represent Star Trek’s continuity.

Animation gave the series the ability to do things that would have been near-impossible on a 1960’s television series. We have a wider variety of aliens here. The bridge crew includes a three-armed helmsman named Arex. He’s voiced by Doohan. There is also a backup communications officer named M’Ress, who is a feline voiced by Barrett. The crew also can find themselves in a wider variety of situations that include going underwater and shrinking down to several inches. The crew now sported a force-field belt that allowed them to move about in hostile environments without a face-covering space suit. M Class planets were no longer a limit to exploration by the crew. The animation was a little crude, but it holds up fairly well today.

There were some rights issues with the original Alexander Courage theme. A new theme was written that was intended to sound very much like the famous one, and it does, at times. No one is going to confuse the two pieces, and there are a few who like this one more. I’m not in that camp. Most of the iconic sounds and visuals of the show remained, however, and the voices of William Shatner, Leonard Nimoy, DeForest Kelley, George Takei, Nichelle Nichols, Majel Barrett, and James Doohan certainly add the authenticity that was needed to sell this half-hour cartoon as Star Trek. More important is the fact that it kept the show alive into the 70’s, leading us into the film franchise and ultimate spinoff shows. Who knows if any of that would or could have happened without Star Trek: The Animated Series.

Each episode in its original broadcast full-frame aspect ratio. The 1080p image is arrived at with an AVC MPEG-4 codec. This is a dated cartoon with plenty of scratches and other age-related artifacts. There is an obvious attempt to clean some of this up, but there remains enough to date the material. The high-definition image presentation does indeed preserve some rather bright colors and the look of what we saw on our small analog televisions on Saturday mornings in 1973. You have to take it for what it is and understand this is the best that could have been done without a ton of money and time.

The DTS-HD Master Audio 5.1 is hardly going to blow you away. This was a mono television show. Don’t expect anything fancy here. Dialog and sound effects are necessarily going to be a little flat here. To have anything else would be to drastically alter the vintage experience.

You get a rather nice set of full-color title cards for each episode.

Drawn To The Final Frontier: (24:31) This 2006 feature gives us plenty of anecdotes from the production and writing crew. The actors don’t appear on these features. You’ll get a good idea of the overall show itself.

What’s The Star Trek Connection: (7:12) This is a little weak. You get stills with narration that shows how some of these elements appeared in other versions of the franchise.

To a young kid, this was very much Star Trek at the time. Today the show can look a little silly. Still, I’m very glad that Paramount has finally decided to include it on Blu-ray. In many ways this completes our high-definition Star Trek collections. You just have to try to watch this from the point of view of your inner child. Of course, that’s how I watch any Trek episode, to be honest. Nitpickers will find plenty to complain about. The rest of us just accept that “apparently, the natural laws of our universe don’t operate here, Captain.”

Gino Sassani is a member of the Southeastern Film Critic's Association (SEFCA). He is a film and television critic based in Tampa, Florida. He's also the Senior Editor here at Upcomingdiscs. Gino started reviewing films in the early 1990's as a segment of his local television show Focus. He's an award-winning recording artist for Omega Records. Gino is currently working on his 8th album Merchants & Mercenaries. Gino took over Upcomingdiscs Dec 1, 2008. He works out of a home theater he calls The Reel World. Favorite films: The Godfather, The Godfather Part II, The Body Snatcher (Val Lewton film with Karloff and Lugosi, not the pod people film), Unforgiven, Gladiator, The Lion King, Jaws, Son Of Frankenstein, The Good, The Bad And The Ugly, and Monsters, Inc.
Army Of One (Blu-ray) I.T. (Blu-ray)