Posted in: Disc Reviews by Brent Lorentson on November 24th, 2016 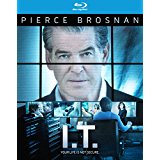 There is a way this film could have been great if not a little amusing. Imagine if James Bond was being stalked by Q; what would Bond do?  Sure, I’ll admit it’s a silly notion, but it’s all I could think about as I watched this film about a millionaire and his family being stalked by a disgruntled I.T. worker.  In general, it’s a story we see a couple of times a year, the seemingly charming figure that comes into a person’s life that turns out to be crazy and throws everyone’s life into chaos.  Films like Cape Fear and One Hour Photo are just a couple of examples of films that tackled the stalker sub-genre; even last year’s overlooked gem The Gift showed you can still be terrifying with a little creativity.

Mike Regan (Pierce Brosnan) is a millionaire who has it all.  He has a beautiful, loving wife, Rose (Anna Friel) and a teenage daughter, Kaitlyn (Stefanie Scott) as well as a successful enterprise.  Mike is looking to expand his brand and create a new business venture, one that looks to embrace the future of technology as our society continues to grow all the more dependent on our smart phones and computers.  After helping save Mike’s pitch to the company, Ed (James Frencheville), an I.T. temp, gets hired full time to the company.  Impressed with Ed’s talents, Mike even goes so far as to invite the new I.T. guy out to his home to check out his home security system.  I don’t think you need a Magic 8-Ball to see where this is going.

Where the film hurts itself so much is how by-the-numbers the first half of the film is.  There’s no surprise when Ed develops a crush on the daughter that of course leads to deranged obsession.  Even when the daughter attempts to defend him, this seems silly because she really has no reason to even like this guy.  Even more frustrating is how long it takes for Mike to decide to do anything about the home security system that Ed has obviously tapped into and is using against the family. For some this film should be a cautionary tale for putting too much technology into your homes; you really don’t know who is watching you and what they can do with what they can see. This is not so subtly hinted at, since we find out that Ed used to work for the NSA.

The film does finally pick up speed and becomes a little more fun once Mike brings in an I.T. guy of his own to fight back against Ed. I got a little too hopeful, unfortunately. While there are some entertaining sequences, like when Mike sneaks into Ed’s apartment to gather evidence, this is still not enough to save this film.  Brosnan does his best to salvage this film, but he’s just not given enough to work with.

While I was hopeful that this could tap into the terror of stalking in the digital age, instead this felt nothing more than a limp retread from the analog days.

I.T. is presented in the aspect ratio 2.35:1.  The 1080p image is arrived at with an AVC MPEG-4 codec that reaches as low as 12 mbps and gets as high as 38 mbps.  The overall look is very desaturated and has a very cold look to it.  The skin tones appear to be more pale than usual.  In some of the close-up shots we get the detail we’ve come to expect with Blu-ray, but overall the focus just seems a bit soft at times.  There is also a surprising lack of depth with the blacks here.

The Dolby Digital 5.1 track is what you’d hope for with a suspense film.  The best use of the surround is a scene where there is a car accident and we can hear the shards of glass moving around us.  There are some other moments where the use of sirens from varying speakers comes into play, but it’s not enough to save the film.

Behind the Scenes of I.T. (8:06) Another standard feature with brief interviews with the cast and crew discussing what brought them to the film.

I went into this hoping at the very least it would be an entertaining film, and, well, it at least accomplished that.  Unfortunately, sadly I.T. comes a-knocking but fails to deliver any thrills or  chills but instead brings yawns and eye rolls.

Brent Lorentson is a horror writer and film critic based out of Tampa, Florida. With a BA in Digital Film, he co-wrote and co-directed Scavenger Hunt. His short stories have appeared in various horror anthologies. In 2019 his short script Fertile Blood will be a part of the anthology horror film Slumber Party. He is currently working on his first novel A Dark and Secret Place set to be released in late 2019. Favorite Films: Taxi Driver, Fight Club, I Saw the Devil, The Wild Bunch, Dawn of the Dead, A Clockwork Orange, Pulp Fiction, Heathers, The Monster Squad, and High Fidelity.
Star Trek: The Animated Series (Blu-ray) The Secret Life of Pets (UHD Blu-ray) (4K)