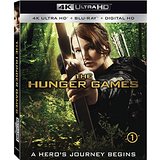 “In penance for their uprising each district shall offer up a male and female between the ages of 12 and 18 at a public reaping. These tributes shall be delivered to the custody of the Capitol and then transferred to a public arena where they will fight to the death, until a lone victor remains. Henceforth and forevermore this pageant shall be known as The Hunger Games.”

Now that all four films are out on UHD Blu-ray in glorious 4K, we have the opportunity to view them all again from the very beginning. It’s easier to catch the subtle nuances that were planted in the earlier films that would pay off over the four-film run. It took us four years to do that originally. Now you can do it in a day. John Ceballos takes us on the first part of that journey with The Hunger Games (2012).

As someone who devoured The Hunger Games during a single marathon sitting a week before the movie’s release, I was particularly curious and excited to see Suzanne Collins’ best seller get the big-screen treatment. Judging by all the Team Peeta devotees and side-braid-sporting, would-be Katnisses — who had certainly been waiting for the movie a lot longer than I had — at my opening night screening, I was far from the only one. (The record-breaking box office was another clue.) Still, in a theater packed with rabid superfans, and with a beloved property making its much-anticipated jump onto the silver screen, the question of whether or not the movie is actually any good can often seem somewhat beside the point.

In case you’ve been living under a rock — or were buried in a District 12 mine explosion — The Hunger Games is set in the nation of Panem, what’s left of North America after an unspecified apocalyptic event in the future. Panem consists of the wealthy, oppressive Capitol and its 12 surrounding districts. Every year, each district must send one boy and one girl — ages 12 to 18, and known as “tributes” — to compete in the Hunger Games, a televised battle to the death meant to re-establish the Capitol’s dominance over the rest of the nation.

Katniss Everdeen (Jennifer Lawrence) volunteers for the 74th Hunger Games, after younger sister Prim (Willow Shields) is chosen as District 12’s female tribute. Despite being a skilled hunter and archer, Katniss’s odds are most certainly not in her favor as she faces off against 23 other tributes, including a few who specifically trained to participate in the Hunger Games (like Alexander Ludwig’s Cato, the reincarnation of Billy Zabka in The Karate Kid) as well as Peeta Mellark (Josh Hutcherson), her male counterpart from District 12.

Let’s get one thing straight, right off the bat: I am not here to compare this film to Collins’ book. I strongly a believe any movie — whether it’s based on a book, a play or a theme park ride — should be able to stand on its own. Also, since the novel is so fresh in my mind, if I listed all the differences, alterations and omissions between The Hunger Games book and the movie, we’d probably be here until Catching Fire hits theaters. (Another point: The Hunger Games already clocks in at a robust 142 minutes.)

Besides, the best thing this movie has going for it is a good-old-fashioned, star-making turn. Obviously, Collins deserves a ton of credit for creating such a well-rounded heroine, but the main reason this movie works is because of Lawrence. The actress — who already earned an Oscar nomination for playing a tough-minded teen forced to be the head of her household in Winter’s Bone — is heroic, vulnerable and totally convincing as a nimble action star, while still managing to remind us that Katniss is a scared kid. She’s so good, her leading men can’t help but suffer in comparison. I really wish Hutcherson had brought more of an edge or inscrutability to his mostly bland, nice-guy portrayal of Peeta. Meanwhile, Liam Hemsworth’s hulking Gale — Katniss’s platonic(?) hunting partner back home — is more effective when he’s silently reacting to Katniss and Peeta’s blossoming showmance during the Hunger Games, and less effective when he’s speaking.

Though the young cast shoulders a significant burden, they are ably supported by an impressive parade of wigs (and the character actors who wear them). Faring the best are Elizabeth Banks (seemingly the only person interested in even attempting a “Capitol accent” as District 12 escort Effie Trinket), Stanley Tucci (as blue-haired interviewer Caesar Flickerman) and Woody Harrelson (amusing even as a watered-down version of drunken District 12 mentor and former Hunger Games winner Haymitch Abernathy). Together, they provide most of the comic relief. Lenny Kravitz is suitably empathetic as friendly stylist Cinna, while Donald Sutherland’s performance merely hints at the trouble his President Snow will cause in future movies. Also, I’d love to tell you about Wes Bentley’s work as Head Gamemaker Seneca Crane, but I was too mesmerized by his facial hair to remember anything he said or did.

Director Gary Ross (Seabiscuit, Pleasantville) does a slightly better job of establishing the impoverished District 12 than the outrageous Capitol, but they’re both vividly realized. Unfortunately, I felt he came up short once the action moved into the Hunger Games arena. I’m not even referring to the hyperactive and creative editing required to tone down the violence and secure a PG-13 rating. (That’s the cost of doing business: the movie would’ve been very successful if it had been rated R, but it wouldn’t have pulled in $152 million on opening weekend!) I’m talking about the way the movie seems to be in too much of a hurry to move from one story beat to the next: basically, there’s no time for the tributes to even go hungry in the Hunger Games. On top of that, I felt Ross — who also wrote the screenplay — could have hit the satirical aspects of the story a little harder. We see Crane manipulate the proceedings like any good reality show producer, and we get a glimpse of the poorer districts solemnly forced to watch the Hunger Games unfold, but where are the Capitol people who supposedly eat this stuff up? (Remember the viewers glued to their sets while The Truman Show was on?) That audience, even during Flickerman’s interviews, is largely faceless and pretty much a non-entity.

The Hunger Games is presented in its original aspect ratio of 2.40:1. The ultra-high-definition  image is arrived at by an HEVC codec. With such a visual franchise you would expect this ultra-high-definition image presentation to shine. You would be correct up to a point. Lionsgate made a serious fatal flaw in this franchise for 4K release. They included the feature-length bonus material on the 4K disc. That takes up serious space and bit-rate. So you end up with a film that is a definite improvement over the Blu-ray but not likely as much as it could have been. You get the extra brilliant colors which matter most in this first film. The Capitol City colors are vibrant and wonderful. What is missing is the rather almost-3D depth that I’ve found to be an effect of such sharpness and detail. There is nice texture, but you don’t quite get the depth there, either. I hope this is a mistake the studio does not make on future 4K releases. The Blu-ray has been included, and the extras are already there. The 4K versions are not HDR anyway, so the space on the disc is wasted, in my opinion.

The Dolby Atmos presentation defaults to a nice 7.1. The audio presentation does not suffer from the crowded disc space. There is a lot of depth here. Surrounds give you a wonderfully immersive experience with just the right balance of aggressiveness and a rather stunning use of silence. Dialog cuts through perfectly. I remember James Newton Howard when he was part of the Elton John Band, and he has become a pretty clever composer over the years. This is one of his best, and it is used nicely to convey emotion and drama throughout the film. It’s both dynamic and near-silent when it needs to be. The subs will bring you a ton of power, but again only at the right times.

There is an Audio Commentary with Editor Stephen Mirrione, F/X Supervisor Sheena Duggal and Sound Editor Lon Bender. As you might expect, it’s very much a technical commentary.

The World Is Watching – Making The Hunger Games: (2:02:00) Someone went to the Peter Jackson school of extras. While this really should have been on its own disc, this feature is longer than the film itself and goes into every aspect of the film you could ever want. There’s a ton of participation from cast and crew with a ton of behind-the-scenes footage. There are eight parts with a play-all option. This is what features should be. Don’t make me work to see a few minutes at a time. Other studios need to take note here.

It just shouldn’t have been on the 4K disc.

Gamemaker – Suzanne Collins and the Hunger Games Phenomenon: (14:15) Collins is actually not on the feature. Instead we get her publisher and others who comment on the material. There are reading excerpts from the book.

Letters From the Rose Garden: (9:09) Donald Sutherland wrote a rather extensive letter to director Gary Ross when he got the part of Snow. It goes into a lot of philosophy of good and evil and socio-political theory. Much of it looks at the historical corruption of power.

In the end, Ross’s movie effectively transfers the essence of Suzanne Collins’ book to the big screen while also hinting at adventures yet to come. The movie is quite good, but doesn’t achieve excellence — not that anyone in that rapturous opening night screening noticed or cared.