Posted in: Disc Reviews by Gino Sassani on November 29th, 2016 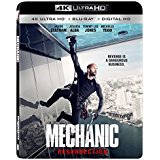 1n 1972 Charles Bronson played The Mechanic, Arthur Bishop. He was a hitman with a high level of skill. When he tries to pass on that skill, he’s betrayed, and he has to get himself a heaping helping of revenge. In 2011 Bronson did indeed pass the character to Jason Statham when the film was remade. Unfortunately, Bronson had passed in 2003 and couldn’t actually pass the torch on the screen. Statham turned the character into more of an action anti-hero, and the film really didn’t perform at the box office. It never made back its budget in the domestic market and barely made money when the worldwide take was finally counted. It certainly didn’t appear as if the world was clamoring for a sequel. Instead of going for a direct-to-video release, the film tanked at the American box office but was saved by a reasonable take worldwide. Not enough, I suspect, to see the character return, at least not to the box office. The Mechanic: Resurrection couldn’t raise the franchise from box office death, but it might just be a solid direct-to-video franchise if the star and filmmakers have the desire to keep playing in this particular sandbox.

Arthur Bishop (Statham) is a professional killer who is believed dead himself. He’s no longer in the assassin business. He’s been keeping a low profile until he’s approached by a woman who represents a Mr. Crain (Hazeldine). Crane wants Bishop to kill three targets that are almost impossible to get to. If he doesn’t do the job, Crain will reveal to the world that Bishop is still alive. Of course, Bishop refuses, but it sends him on the run hoping to find Crain before Crain can find him. That’s when he meets Gina (Alba) who is also being blackmailed by Crain and has been placed in Bishop’s path as a damsel in distress to force him to do the jobs. When that doesn’t work, Gina is kidnapped, and now Bishop sets out to do the jobs while trying to rescue Gina.

This movie attempts to reset the franchise somewhat. While there is still plenty of the action film that was the crux of the 2011 remake, there is an obvious attempt here to add in Bond and MacGyver elements. Bishop appears far more refined in this film and uses more homemade methods to carry out each job. There’s less of a brute-force approach this time out. You absolutely get the MacGyver feel during the preparation and execution of his jobs. There is also a globetrotting Bond feel to the entire film. We travel to Rio, Thailand, Bulgaria, Malaysia, Australia, and Cambodia. The bad guy also lives in a decked-out yacht that reminds us of several Bond villains. Jessica Alba is presented very much in the formula of a Bond girl. She’s an attractive damsel who knows how to take care of herself as well. The romance is set against several exotic locations. There’s little doubt that the filmmakers are hoping to re-establish Bishop as an American James Bond.

The film has too much of an anthology feel going for it. Bishop has to pull off three jobs plus a couple of rescue attempts of Gina. There does not appear to be a real cohesion between these events, and it’s almost as if we’re watching a montage instead of a fully developed movie. The villain doesn’t live up to the hype. Sam Hazeldine doesn’t deliver a bad performance, but never do I get the feel that this guy is as dangerous or grand as his buildup and floating lair indicate that he must be. He doesn’t have the kind of eccentric personality that makes him stand out like the Bond bad guys always have. And let’s be honest here. That’s exactly what they wanted here. Tommy Lee Jones shows up for the final act, and you get the impression that there was a mix-up in the roles. Jones would have made a much more interesting Crain and provided the kind of villainy the film is begging for. Instead Jones gets a small but admittedly crucial part to close out the film. Even Jessica Alba’s considerable talents are wasted here. There’s enough time spent to establish a relationship, but then they spend the rest of the film apart. We end up with a perfectly wonderful movie visually that suffers because it never can decide exactly what it’s supposed to be.

The Mechanic: Resurrection is presented in its original aspect ratio of 2.40:1. The ultra-high-definition  image is arrived at by an HEVC codec. There are certainly some beautiful locations in this movie, and the ultra-high-definition image presentation brings them to life in stunning detail. The sharpness and super-fine resolution takes us through these stellar Thailand islands that sport deep blue sea colors and rich vegetation on their crowns. There’s an island prison that looks quite nice on screen. It’s absolutely the kind of place James Bond might have to infiltrate, and it’s buoyed by fine contrast between the earth-tones cliff and the vibrant sea below. Black levels are excellent.

The Dolby Atmos presentation defaults to a 7.1 track. This is a film that spends most of its audio production on dialog and the score. Unfortunately, the score sounds a bit flat. It’s produced electronically, for the most part, and doesn’t have the kind of dynamic depth that is found in an actual orchestra. There’s a reason why filmmakers spend the kind of money they do on orchestration. The dialog, however, does punch through, and Statham’s voice has a nice deep edge to it. The subs come alive during the action moments. Surrounds are somewhat restrained but provide enough ambient sound to keep you in the experience.

Engineering the Sequel – Inside Mechanic: Resurrection: (9:55) Cast and crew provide their take on the character and the film. At one point the director tells us that Jason owns the part and that it belongs exclusively to him. That would come as a surprise to the family of Charles Bronson. Of course, the focus soon shifts to the stunts and action.

Scoring The Action Film With Mark Isham: (9:00) The composer talks about his approach to the score.

The Malaysian Prison: (1:22) This is one of the coolest locations, and we get a very brief look at the production there.

Statham On Stunts: (1:22) The actor talks about doing his own stunts.

There are moments when this has the elements of a pretty good film. It really never comes completely together. Whatever their plans for the future, it’s clear that the character and franchise have changed considerably from the original 1972 film and even the 2011 remake. There’s going to have to be a coming-to-Jesus moment if there is going to be a future for the character. To continue on this path, the lesson to be learned may well be “even legends die”.

Gino Sassani is a member of the Southeastern Film Critic's Association (SEFCA). He is a film and television critic based in Tampa, Florida. He's also the Senior Editor here at Upcomingdiscs. Gino started reviewing films in the early 1990's as a segment of his local television show Focus. He's an award-winning recording artist for Omega Records. Gino is currently working on his 8th album Merchants & Mercenaries. Gino took over Upcomingdiscs Dec 1, 2008. He works out of a home theater he calls The Reel World. Favorite films: The Godfather, The Godfather Part II, The Body Snatcher (Val Lewton film with Karloff and Lugosi, not the pod people film), Unforgiven, Gladiator, The Lion King, Jaws, Son Of Frankenstein, The Good, The Bad And The Ugly, and Monsters, Inc.
Return Of The Living Dead 3 (Blu-ray) The Hunger Games (UHD Blu-ray) (4K)