Looking: The Complete Series and The Movie (Blu-ray) 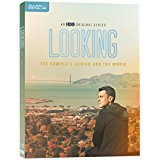 The most remarkable thing about Looking might have been how thoroughly unremarkable it was. The HBO dramedy — which followed the love lives of three gay friends in San Francisco — sidestepped any sort of headline-grabbing sensationalism. However, Looking was often low-key to the point that it bypassed being funny or particularly entertaining. The latter point was a bigger issue early on since the show’s naturalistic tone made Looking more engrossing as the series progressed and deepened its roster of characters. You can see for yourself how the show got better as it went along now that HBO has released the entire Looking saga — two seasons and a movie — in one handy Blu-ray set.

“I don’t know if either of us are very good at being who we think we are.”

Season 1 of Looking follows the lives of Patrick (Jonathan Groff), a lovelorn, 29-year-old video game level designer; Agustin (Frankie J. Alvarez), a 31-year-old artist’s assistant — and a frustrated artist himself — in a committed relationship; and Dom (Murray Bartlett), a 39-year-old waiter with a preference for younger guys who is at a personal and professional crossroads in his life. Patrick eventually connects with a guy he doesn’t immediately chase away in Richie (Raul Castillo) — a gentle, unambitious barber — but later finds himself drawn to new boss Kevin (Russell Tovey), who is in a long-distance relationship. Agustin quickly becomes wary of domesticity and enters into a potentially-troublesome art project with a male escort. Meanwhile, Dom decides to pursue his dream of opening his own Portuguese chicken restaurant with the help and support of handsome, older entrepreneur Lynn (Scott Bakula).

The show is created by Michael Lannan, who based the series on his own 2011 short film Lorimer. (Which also featured Castillo as a character named Richie.) The show brings a mumblecore sensibility — characterized by lower budgets and naturalism in its dialogue and presentation — to the small screen. It’s a pretty good fit of style and material given that mumblecore stories often track the lives of single characters in their 20’s and 30’s. With its frank, graphic sex talk and prominent urban setting — even sex workers have matte finish business cards — Looking has been called a “gay Sex and the City.” (Well, a gayer, Sex and the City anyway.) Of course, this show (intentionally) eschews the sizzle and snappiness of that previous iconic HBO hit.

The less glossy, more warts-and-all presentation of Looking also leads to a good amount of frustration involving the characters. Simply put, the three main characters are often a smug, self-involved bunch. It’s no accident that two of the most likable characters — Richie and Lynn — are outsiders that magnify the main trio’s negative qualities. The highlight of season 1 is the Before Sunrise/Sunset-esque fifth episode “Looking for the Future,” a showcase for Patrick and Richie. Season 1 ends, not surprisingly, with several relationships up in the air. Some pairs break up and others take a tentative step forward. To be honest, I was a little surprised by how invested I was in some of these connections by the time the finale wrapped up with a sweet nod to The Golden Girls.

The action kicks off with a good ol’ fashioned road trip (Ep. 1/“Looking for the Promised Land”) about two months after the events of the finale. Patrick, Agustin, and Murray trek to Lynn’s luxurious cabin near the Russian River. (Drugs and nudity are prominently involved.) Patrick is still carrying on a secret relationship with his boss Kevin while regretting his failed connection with Richie. Agustin is completely adrift; he has given up being an artist and may or may not have an alcohol/drug addiction. Meanwhile, Murray continues pursuing his culinary dreams — this time it’s a “chicken window” in an unsavory part of town — while navigating an open relationship with Lynn.

Season 2 improves over the show’s comparatively claustrophobic first season by expanding its scope. The most obvious change is that Tovey’s Kevin, Castillo’s Richie and Lauren Weedman’s Doris (Dom’s long-time best friend and current roommate) have been promoted to series regulars. While the focus is still on the main trio, these supporting players become integral parts of the second season’s story. (Rather than simply serving as Dom’s “hag”, Doris gets her own long-term love interest and even a showcase episode in Ep. 7/ “Looking for a Plot.”) Richie is still used pretty sparingly, but the character’s soulfulness and open-heartedness are still essential to the show. Heck, even Agustin is bearable this time around, which is truly the greatest accomplishment of season 2. Daniel Franzese joins the cast as Eddie, who volunteers at a homeless shelter for LGBT youth and proves to be a positive presence in Agustin’s life for a number of reasons.

While gay hookup apps and the GaymerX conference still serve as plot points, the universally messy business of mixing sex, friendship, love, breakups and makeups take center stage in season 2. For example, Patrick is still a bumbling, irritating worrywart when it comes to matters of the heart, but he’s somewhat more bearable next to the more assured Kevin, who nevertheless struggles with his own conflicted feelings. The season ends on an appropriately uncertain note for those two lovers, so it’s a good thing HBO appeased fans of the show with a TV movie that brought the gang back together.

“Sometimes you gotta leave things behind so you can move forward.”

About a year has passed since the end of season 2. Patrick, who has moved to Denver, returns to San Francisco for a wedding. Although he arrives with a seemingly more casual attitude about relationships, Patrick falls into some old habits when he reconnects with both Richie and Kevin. Meanwhile, Agustin has a job at an art institute…and is mildly horrified that his life appears to be settling into (gasp!) normalcy. Dom — who has now grown a full beard rather than his signature mustache — remains laser focused on making his chicken window work, which comes at the expense of any sort of romantic prospects.

Looking: The Movie is directed by Andrew Haigh, who directed 10 of the series’ 18 episodes. Haigh also co-wrote the teleplay with Looking creator Michael Lannan. Although it clocks in at just under 85 minutes, the naturalistic and cinematic look of this show makes it a surprisingly good fit for the movie treatment. Naturally Haigh, Lannan, and the cast use this film to tie up some loose ends and give fans closure. However, the Looking team also explores the inevitable encroachment of adulthood. (Is it something to embrace or be horrified by?

On top of all that, this movie is also pure wish fulfillment. Practically every member of the Looking universe (I miss you, Bakula!) appears in the movie and gets a moment to shine. Even Patrick finally develops a spine when he gets into a heated and fascinating argument with Richie’s new boyfriend about the “right way to be gay.” There are also some fun revelations for fans, such as the fact that Patrick and Dom once came thisclose to hooking up. But despite all the hookups and fights, Looking: The Movie is ultimately as unabashedly romantic as the two seasons that preceded it. The movie doesn’t quite go out of its way to give all of its characters a happy ending, but it does conclude this story on a lovely note.

Looking: The Complete Series and The Movie is presented in an aspect ratio of 1.78:1. The 1080p image is arrived at with an AVC MPEG-4 codec at an average of 28 mbps. Another mumblecore characteristic is the use of real-life settings, and Looking takes advantage of that as well as any recent show I’ve seen. (Even the establishing shots of various San Francisco locales are vibrant and gorgeous.) Cinematographers Reed Morano (season 1) and Xavier Grobet (season 2) favor a lot of natural lighting (the woodsy season 2 opener is a standout), which often results in some richly darkened interiors and interesting shadow effects on actors’ faces. Thankfully, the black levels on this HBO release are spot-on. The show also employs a muted, slightly grayer palette that separates Looking from sunnier, L.A.-set series. Overall, this Blu-ray release makes a strong case for — and brings out the richness of — naturalistic filmmaking in television. (HBO’s Togetherness followed suit shortly after.)

The DTS-HD Master Audio 5.1 track is dialogue-heavy, with the words being largely isolated to the front speakers. In fact, there’s a clear and effective separation between the dialogue and the city/ambient noises that take up space in the rears. (Looking features frequent outdoor sequences.) Subs thump to life in a dynamic way during any scene that features club music, most notably the outdoor rave in the season 2 opener. There’s also a nice, subtle effect of music getting softer if it’s coming from another room and louder if someone opens a door to that room. Not a show-off track by any means, but absolutely as vibrant as the city where the show is set.

Audio Commentaries with Cast and Crew: The six commentary tracks from the previously released season 1 Blu-ray set have been ported over. Meanwhile, season 2 features a commentary track for each of the 10 episodes. Haigh, Lannan, the three main actors (Groff, Alvarez, and Bartlett), and the show’ supporting players (Weedman, Castillo, Tovey, Franzese) pop up regularly for funny, rollicking conversations with plenty of naughty talk (the participants ogle the actors during nude scenes and the creators discuss the stuff HBO wouldn’t let them show), trivia (Haigh cameos as the guy Patrick is trying to hook up with in the park during the pilot), and production detail (the real-life San Francisco locations used in the show, including cruising spots). There are no special features attached to the movie, which is surprising.

Looking: The Complete Series and The Movie features both seasons of the show (18 episodes in all) and the 85-minute movie on five discs. HBO eschewed a standalone Blu-ray release for season 2 — which contains the best material Looking had to offer — so releasing the complete series and the movie together is a very good compromise and make-good for eager fans.

Despite lacking a strong storytelling hook or any true watercooler moments, this show still managed to get under my skin when I wasn’t, well, looking.