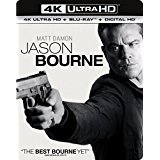 Moviegoers tend to have better memories than amnesiac assassins, but I think it’s fair to say we’ve mostly put The Bourne Legacy out of our minds. Universal’s underwhelming, halfhearted attempt to spin off one of its more lucrative franchises all but guaranteed the eventual return of original star Matt Damon and two-time director Paul Greengrass (The Bourne Supremacy, The Bourne Ultimatum). The duo has re-teamed for the entertaining yet inessential Jason Bourne, which — for better and worse — will feel extremely familiar for fans of the trilogy.

“I remember…I remember everything.”

To be clear, if Jason Bourne (Damon) actually remembered everything, we’d probably still be stuck watching Jeremy Renner run around an inferior facsimile of a Bourne film. If it sounds like I’m being too hard on Legacy, it’s because I felt it had the potential to take one of the more consistent big-money franchises in an exciting new direction. Instead, the movie was basically a side-sequel that clung to Damon and its predecessors like a security blanket while making some ill-advised additions. (Chemically-enhanced assassins…blech!) Jason Bourne, though expertly crafted and performed, displays a similar hesitancy to take bold strides.

It’s been about 10 years since the aftermath of Ultimatum, and an apparently self-destructive Bourne is participating in what amounts to primitive UFC bouts in Greece. Bourne is still haunted by fleeting memories of his past life as David Webb, his identity prior to volunteering for CIA black ops program Operation Treadstone. Meanwhile, Bourne’s former ally (and more?) Nicky Parsons (Julia Stiles) sets out to hack the CIA’s mainframe server and expose the agency’s wrongdoing, especially when it comes to programs like Treadstone and the intriguing new Ironhand. During the hack, Nicky discovers some potentially game-changing information about Bourne/Webb and proceeds to arrange a meeting with him

Nicky’s revelation, which involves Bourne/Webb’s father (Gregg Henry) and the early days of Treadstone, thrusts Bourne on a globetrotting chase for the truth. (Jason Bourne makes stops in Greece, Iceland, Berlin, London, and — most spectacularly — Las Vegas.) It also puts Bourne back on the CIA’s radar. The agency is led by CIA director Robert Dewey (Tommy Lee Jones), and the efforts to track Bourne are spearheaded by Cyber Ops Division Head Heather Lee (Alicia Vikander), who believes Bourne can still be an asset to the agency. Of course, that means Lee will have to catch Bourne before a revenge-minded fellow asset (Vincent Cassel) and other nefarious forces kill him first.

Much like its conflicted hero, Jason Bourne seems a bit insecure about its own existence. (Even the throwaway Edward Snowden reference during Nicky’s hack feels like a stab at relevance.) The movie is almost entirely made up of tricks and tropes from the original trilogy. (Most damningly, there’s a loose remake of the saddest scene in all the Bourne films.) I’m well aware that sequels routine hit familiar beats so that audiences can connect with what came before. But the sense of deja vu in Jason Bourne isn’t quite as welcome, especially since The Bourne Ultimatum seemingly wrapped the character’s story up in such a perfect way.

After the release of Ultimatum, Damon stated he wouldn’t make any more Bourne movies without Greengrass, who wanted to stretch his creative muscles. (The director made 2010’s Green Zone with Damon, and 2013’s Captain Phillips.) Greengrass co-wrote Jason Bourne with Christopher Rouse, an editor by trade who won an Oscar for his work on Ultimatum. The new film doesn’t really dive into the Jason Bourne vs. David Webb conundrum. (Should Jason accept his new life or keep digging around his old one?) In fact, the bare-bones script gained pre-release attention after it was revealed that Damon only had about 25 lines of dialogue in the film. To be honest, I didn’t really notice Damon speaking any more or less than he did in his previous outings as Bourne, who is always on the run and whose potential conversation partners don’t last very long.

Naturally, the Damon/Greengrass reunion does yield a good amount of goodies for fans. After a brainy detour to Mars, Damon is back to kicking butt swiftly and efficiently. The actor is as good as he’s ever been as Bourne, who now has some prominent gray hairs peeking through; it serves as a subtle nod toward the character’s weariness and mortality. Meanwhile, Greengrass — with an assist from cinematographer Barry Ackroyd — brings back the urgent (nausea-inducing?) camera work that has become his signature. Early on in Jason Bourne, we get a spectacularly chaotic sequence that has our hero dodging CIA operatives, Greek police, and rowdy protestors. Later on, Greengrass somehow tops that set piece with the sort of bombastic, twisted-metal car chase that he typically stages in claustrophobic European cities. (It’s Vegas, so he had to go BIG.)

Jones, as the latest “two-steps-behind” government authority figure, is the movie’s best addition. Although that role has previously been played by fine actors (Chris Cooper, Joan Allen, David Strathairn, Edward Norton), Jones is the first to bring an understated sense of play to the franchise’s seriousness. You can tell the Bourne brass had high hopes for Vikander, who won an Oscar earlier this year for Ex Machina The Danish Girl. Initially, the assured Heather Lee seems like she might actually be a worthy (intellectual) adversary for Bourne. Ultimately, the character is defanged and the actress is outshone by her more dynamic scene partners. Meanwhile, Cassel becomes the latest international actor (following Clive Owen, Karl Urban, and Edgar Ramirez) to play a dark version of Bourne. While I found it refreshing that Cassel’s “asset” is given personal motivation for wanting Bourne dead, the movie takes their connection a step too far.

There’s also a subplot involving a cocky, conflicted tech mogul (played by the excellent Riz Ahmed of The Night Of). But instead of exploring the “personal rights vs. private safety” issue in a substantial way, this plot thread mostly exists to set up the film’s explosive final act. And you know what? I’m fine with that.

Jason Bourne is presented in its original aspect ratio of 2.40:1. The Ultra-high-definition  image is arrived at by an HEVC codec. Action films really are a good style to showcase 4K releases. You’ll be impressed at how much the extra resolution and increased depth allow you to catch details even when the action is moving so quickly. I truly appreciated that additional weight in the cool car chases…or should I say crashes. The movie has a bit of a dark feel, and the exceptional black levels give you a ton of shadow definition. You’ll see it all with nice distinction and clarity. Look for colors to be spot-on. They aren’t particularly vibrant here, but truly they weren’t meant to be. Establishing shots of some of these exotic locations are like travelogues. While not flashy, this is ultra high definition on a blue-collar working film level.

The DTS:X presentation defaults to a nice 7.1 track. It’s easy to get swept away with the chases as sirens and crash sounds assault you from all directions. The same can be said for the gunfights. The score is actually quite reserved and limits itself mostly to the front speakers. Dialog cuts through quite nicely even if Bourne doesn’t exactly have a lot to say here. The sound design actually works quite nicely in the convention hall where you get the crowd murmurs but also a true feel for the open space. Subs accent it all with some sweet ground-shaking moments.

Bringing Back Bourne: (8:15) Damon talks about how important it was to have director Greengrass back. It’s why he agreed to return. We get some nice soundbites from cast and crew about the character’s return. It includes some nice production footage.

Bourne To Fight: (10:13) There are three parts to this action feature. You get a trusty play-all. Damon shows us the training and choreography work that brought these action scenes to life.

The Athens Escape: (5:38) A close look at the early motorcycle chase scenes.

Las Vegas Showdown: (14:56) This one has two parts, once again with a play-all option. We get a look at how they did the convention scene and the logistics of shutting down a part of the famous Vegas strip.

At its core, the Bourne movies serve as a thinking person’s alternative to all the thudding noise at the summer box office. Jason Bourne is a good movie that continues that tradition and serves as a nice antidote for anyone suffering from Superhero Overload. If I’m a little disappointed, it’s because the Bourne trilogy used to represent a rare breed: a major franchise that got better with each outing. While that’s no longer the case, I believe Damon and Greengrass still have it in them to make another great Bourne movie, provided someone in their brain trust comes up with a fresh concept. (Jason Bourne certainly leaves the door open for a follow-up.) Moviegoers will ultimately vote with their wallets. “This can stop now… you have a choice.”