Posted in: Disc Reviews by Brent Lorentson on December 15th, 2016 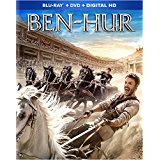 In 1959 when Ben-Hur came out, it was a massive undertaking that nearly closed the gates for MGM after nearly bankrupting the studio.  It was a huge risk in producing such a large-scale epic that fortunately paid off and became one of the studio’s cornerstone successes.  The story of Judah Ben-Hur and his fall from being a prince, to becoming a slave, to eventually becoming a hero to the people in the arena is such a familiar story that it’s hard to not feel you’ve seen this before without even entering the theater.  In some parts I look at Gladiator and see somewhat the same film, only being set in a separate time and place.  But really, the story of betrayal at the highest levels, and seeing great figures fall only to pull themselves up again is a theme Hollywood seems to relish, and it seems to attract many viewers in the process.  Now it seems Hollywood is desperate for remakes, and I figure someone felt it was time to once again dust off the story of Ben-Hur, only this time throw in all the CGI gimmicks at the director’s disposal; after all, $100 million isn’t the investment it used to be for a film.  But to paraphrase the great Ian Malcom from Jurassic Park, perhaps the producers were so preoccupied with thinking if they could remake the film they didn’t stop to think whether they should.

Jack Huston (Boardwalk Empire) is the newest star to tackle the role of the Jewish Prince Judah Ben-Hur.  This is the kind of casting that has me a little excited, because right now he’s just an actor on the rise, and having him front in center on a grand epic is something that could help make Huston a breakout star.  He’s a departure from previous incarnations, but in a good way; he gives more range than what we’ve seen before, yet sadly doesn’t have that commanding presence that Charlton Heston was able to bring to the role. But Huston manages to give his character charm as we see him in love with Esther (Nazanin Boniadi), a servant girl in the palace.  But the crux of the story is around the friendship/brotherly bond between Judah and Messala (Toby Kebbell), a Roman soldier who grew up as an adopted child with Judah.

With this incarnation of Ben-Hur, it only has a 124-minute running time, so obviously corners have been cut to condense the story from the 1959 release’s running time of 212 minutes.  Still, more time should have been spent with the relationship of Judah and Messala; give us more of seeing these two as brothers rather than show us a race between the two at the start of the film.  We still see the betrayal of Messala as he sends Judah into slavery after he takes the side of his people as they rebel against the Roman Empire.

Really, the film feels more like a fast-forward version of the story, as we quickly see Judah move along to his time on a slave ship and into the care of Ilderim (Morgan Freeman) who will go on to help train Judah to take the reins of the chariot in the film’s climax.  While Freeman of course does a great job with the film’s narration, every time he was onscreen I couldn’t help but be distracted by his awesome yet insane dreadlocks, so kudos to the hair and makeup department.

Where the film shines is with the film’s action sequences. The slave ship sequence is beautifully shot and in 3D offers some very stunning visual sequences, as do the battle sequences with Messala.  But the show-stopper here is of course the chariot sequences.    Even though we get plenty of handheld shots and numerous fancy camera moves with tons of CGI thrown in for good measure, it still doesn’t hold up to the spectacle of the 1956 version, and I believe it’s because back then it was all real.  The danger just doesn’t seem to come through the screen the same way despite how well the film manages to be shot. Director Timur Bekmambetov (Wanted) is truly a visionary director, but to some degree I wish he didn’t show restraint here.  He’s a director who may not have the most crowd-pleasing films, but he has a way with directing the movement on the screen that makes action seem more so like a ballet movement. That just wasn’t showcased here enough.

Ben Hur in its original aspect ratio of 2.40:1. The 1080p image is arrived at with an AVC MPEG-4 codec at an average 30-35 mbps. The Italian locations are the real beauty of this high-definition image presentation. There are some very sweet vistas and establishment shots to be found here. The colors are understandably warm with a lot of accent on earthtones and yellows. The reds pop, particularly with the Roman uniforms. The chariot scene certainly becomes a highlight, and the computer work blends pretty seamlessly with the live-action material. Black levels are pretty nice. There are some sweet white levels here. The chariot horses offer solid white balance and texture. They’re beautiful animals, to be sure.

The DTS-HD Master Audio 7.1 is a bit of a mixed bag here. The score is a dynamic one, and it cuts through particularly during the heightened action scenes; yes, I’m talking about the chariot race. But that’s really where the balance of the sounds is most on display. The subs bring those horses right into your home theatre. Dialog always cuts through, and there’s a surprising amount of quiet and stillness to be found here. The surrounds are intended to pull you into those action scenes, while the quiet moments truly underscore the emotional element of the film.

Ben Hur The Legacy: (10:37) Lew Wallace’s great-great-granddaughter talks about the author from his Civil War days to the writing of the novel. It ends with a look at the theme of forgiveness which marks this film’s big departure from the novel and previous film adaptations.

A Tale Of Our Times: (15:25) This is the traditional behind the scenes feature that focuses on locations, costumes, and production design.

The Chariot Race: (10:36) You had to expect a feature on the reproduction of such a classic scene. It took 32 days to film and was quite the combination of practical and computer visual work.

Deleted And Extended Scenes: (10:23) Most of these look at Ben Hur’s marriage, which is told through his talk with Messala in the film. There are seven with a play-all option.

There are other issues with the film, some with the handling of the Jesus story that runs parallel with the Judah story.  If the story was axed in favor of developing Judah’s story more this could have helped, but I’m afraid I doubt that, because my major issue with the film is that the points of exposition were simply dull; no matter how hard the actors committed to the parts, the scenes just fell flat.  While I wouldn’t say the film’s a disaster, I hope viewers who do catch this film don’t leave the theater feeling the 1956 version is the same film. Hopefully this will whet the appetite for viewers to experience the previous incarnations of the tale.

Brent Lorentson is a horror writer and film critic based out of Tampa, Florida. With a BA in Digital Film, he co-wrote and co-directed Scavenger Hunt. His short stories have appeared in various horror anthologies. In 2019 his short script Fertile Blood will be a part of the anthology horror film Slumber Party. He is currently working on his first novel A Dark and Secret Place set to be released in late 2019. Favorite Films: Taxi Driver, Fight Club, I Saw the Devil, The Wild Bunch, Dawn of the Dead, A Clockwork Orange, Pulp Fiction, Heathers, The Monster Squad, and High Fidelity.
Howards End: 25th Anniversary (Blu-ray) Suicide Squad (UHD Blu-ray) (4K)