Posted in: Disc Reviews by Brent Lorentson on April 14th, 2017 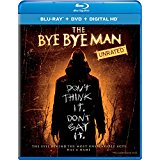 Every year there are dozens upon dozens of horror films released, each with the intention to make an impact on the genre.  Horror is easily my favorite genre in film, but it’s a genre that easily allows itself to spill into other genres. It doesn’t matter to me what the budget is, or whether the special effects are on point; what matters most is if the story holds up.  I mention this because going into The Bye Bye Man I had heard some pretty bad things, but I don’t usually let that get in the way of my opinion of a film; after all, everyone has their own tastes.  For me the film’s tagline “Don’t think it. Don’t say it.” should have the added line, “Don’t remember it.”

Three friends decide to move in together in an off-campus home, Elliot (Douglas Smith) and his girlfriend Sasha (Cressida Bonas) seem to be the happy couple as Elliot’s childhood best friend, John (Lucien Laviscount) seems to be the third wheel.  They think they are supposed to be moving into a fully furnished home, yet upon walking through the door, the furniture is out of sight.  After investigating the new home they find that all the furniture has been stashed away down inside the basement.

Elliot eventually comes across a nightstand with the ominous words “Don’t think it. Don’t say it” scribbled inside the drawer.  Of course, following this discovery, that’s when the creepy stuff starts to occur.

Here is what bothers me. Why are these words so powerful in conjuring a paranormal force?  The mythology for this character is flimsy and borderline nonexistent.  I can handle some mystery, but there is nothing in this film that seems to make a lick of sense when it comes to why the Bye Bye Man exists.  When you look at iconic characters like Freddy or Jason, we know why they exist and understand why they stalk the lead characters. I get it, he thrives off of fear, but how and why did he come into existence in the first place?  We get a little back story in the film concerning the previous victims in the past, but that doesn’t answer anything.  Instead we get the cop-out excuse that any information is lost or forgotten to prevent him from existing.  I’m sure the writer Jonathan Penner who penned the script (from the book “The Bridge to Body Island” by Robert Damon Schneck) may have done this as a sly way of avoiding creating a back story, but instead I see this as lazy storytelling.

As the Bye Bye Man seems to grow stronger, we see this through our trio of leads having more and more hallucinations.  Not all the hallucinations are terrifying; some lead to temptation, while others fuel jealousy.  Had the film just focused on this instead of manifesting some mysterious figure, it would have gone a long way.  But as a body count begins to develop, the town’s homicide detective, Shaw (Carrie-Anne Moss) seems to have an interest in pinning the suspicious deaths on Elliot.  There’s a moment in the film where Detective Shaw is interviewing Elliot about the death of a fellow student, what comes across as the best reason to lock Elliot up and toss the key seems to be enough for her to decide to let him go.  Seriously, he comes across as a lunatic capable of killing others, but she simply shrugs it off like it’s OK for him to not explain why people are being attacked and killed.  World’s crappiest detective would be Shaw; remind me to not visit whatever fictional town she is watching after.

There is so much wasted talent here between Moss, Faye Dunaway, and Doug Jones (who plays the title character), it’s hard to believe they all signed on for this.  I can forgive the acting not being top-notch, but this really seems like a story that they made up as they filmed, and no one took the time to stop and ask what was even going on in this film.  Seven million is what was spent on this film; there are so many independent filmmakers who could have done so much more with this kind of a budget, and it’s a shame it was spent on something that will easily be forgotten.

The Bye Bye Man is presented in the aspect ratio 1.85:1.  The 1080p image is arrived at with an AVC MPEG-4 codec at an average of 30 mbps.  The one thing this film has going for it is the video presentation. From the opening sequence in the daytime during the 60’s era, color pops well, and there is excellent detail to the moody nighttime sequences where the black levels are clear and distinct.  Honestly, I wouldn’t have expected this kind of quality; there is little to no noise in the darkest of shots, and there are no coding issues that were noticeable.

The DTS HD-Master Audio 5.1 track is also a positive note with this release.  It’s a horror film, so you can expect low and high mixes.  One of the cooler sound effects that is pulled off in the film involves the sound of coins falling; managing to give the coins’ fall heft and a range of distance helps give the scenes an immersive experience and add to the tension.  The dialog is clear throughout and seems to be evenly balanced.

This may be one of the worst horror films I’ve seen this year.  I can appreciate trying to give us a new and unique villain to fear at night, but it’s all in the back story that makes these characters come to life.  I doubt I’ll ever be revisiting this title, but for those brave enough to still give this a shot despite my warning, well, just don’t coming running to me when you’re trying to get this film out of your head.

Brent Lorentson is a horror writer and film critic based out of Tampa, Florida. With a BA in Digital Film, he co-wrote and co-directed Scavenger Hunt. His short stories have appeared in various horror anthologies. In 2019 his short script Fertile Blood will be a part of the anthology horror film Slumber Party. He is currently working on his first novel A Dark and Secret Place set to be released in late 2019. Favorite Films: Taxi Driver, Fight Club, I Saw the Devil, The Wild Bunch, Dawn of the Dead, A Clockwork Orange, Pulp Fiction, Heathers, The Monster Squad, and High Fidelity.
Silicon Valley: The Complete Third Season (Blu-ray) The Fate Of The Furious