Behind the Mask — The Batman: Dead End Story 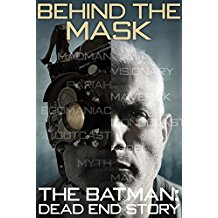 In 2003, a commercial director named Sandy Collora made an 8-minute short film called Batman: Dead End, in which the Caped Crusader does battle with the Joker…along with Alien and Predator! While this sounds like a heavy dose of fanboy wish-granting, the film was Collora’s very serious attempt to show Hollywood big wigs what he could do. The mini-movie turned heads among the Comic Con crowd due to its gritty tone and impressive production values on a shoestring budget. Not surprisingly, this overlong Behind the Mask documentary is at its very best when it chronicles the making of what is widely-regarded as one of the best fan films ever made.

“Every kid in America knows what Batman should be.”

Kevin Smith once referred to Batman: Dead End as “possibly the truest, best Batman movie ever made.” And when you factor in timing and context, he was probably right. As I mentioned before, the short was released in 2003, which is two years before filmmaker Christopher Nolan reinvented and rebooted The Dark Knight on screen with Batman Begins. Up until then, Batman’s big screen track record included a campy movie based on the ’60s TV series (starring the late great Adam West) and, more recently, Joel Schumacher’s disastrous Batman & Robin in 1997. The best Batman movies were the ones directed by Tim Burton, but even those ultra-stylish adaptations included a lot more Prince music than the comics ever did.

Behind the Mask spends its first 20 or so minutes introducing us to Collora, a creative and confident comic book fan who fell in love with Neal Adams’ take on Batman during his youth the 1970s. (Adams offers talking head commentary in this documentary, and I found him to be the most insightful participant.) Collora also fell in love with the work of Steven Spielberg, George Lucas, and James Cameron, which drove him to pursue a career in filmmaking We learn that Collora had a brief stint working for the legendary Stan Winston Studios (he felt frustrated toiling at the bottom of the food chain) and went on to contribute work as a sculptor/designer/effects guy on movies such as Men in Black and Cameron’s The Abyss.

Cameron — who has a reputation for being equal parts exacting, talented, demanding, and confident in his vision — became Collora’s unofficial filmmaking role model. After directing some commercials, Collora decided to take his boldest gamble yet: the director put his money where his mouth was to the tune of $35,000 to produce a short film called Batman: Dead End that would serve as a demo reel. Collora’s effects background allowed him to craft creatures and costumes far beyond what any Joe Schmo could do with a fan film. Most stunningly of all, the director says the film was originally set to star none other than Sylvester Stallone(!!) as Batman and Mark Hamill as the Joker before the two celebrities dropped out. (Collora does a killer Sly impersonation, for what it’s worth.)

As a result, the middle portion of the film — with the excitement among Collora and his crew of enthusiastic misfits growing as they got closer to actually completing this ambitious short — is easily the strongest. Behind the Mask offers some great insight into the making of the mini-movie, including everything from the way Collora wanted a more malleable cowl for his Caped Crusader to rehearsal footage of the short’s fight choreography. We also get a glimpse of the movie’s Comic Con premiere, which became a San Diego sensation after playing to packed convention rooms.

Behind the Mask is written and inartfully directed by Eric Dow, but the documentary also counts Collora as one of its producers. While that was undoubtedly an asset in terms of getting access to some of the great behind-the-scenes footage, it also turns out to be the movie’s main downfall. There is some interesting material here to be mined about the disconnect between enthusiasm in Hollywood and within the Comic Con bubble in 2003. (As opposed to the present day, given that Hollywood has co-opted Comic Con and superhero fiction in general.) Instead, the movie heavily focuses on Collora’s personal life and his stunted Hollywood ambitions. (Dead End turned out to be an apt title in terms of Collora’s desire to make movies for major studios.)

Some of the personal stuff strikes a note, such as Collora’s struggle to finish his short film while his supportive mother was terminally ill. However, the documentary’s focus too often wanders toward Collora’s direction rather than the making of his monumental short. I wouldn’t mind that quite as much if this felt like a more objective telling of Collora’s story. The movie’s final portion chronicles Collora’s false starts as a big-time Hollywood director; in short, Collora potentially passed up the chance to direct some studio movies because he wouldn’t be able to make them his way. On one hand, the filmmaker’s uncompromising attitude and spirit are absolutely admirable. But I can’t help but feel like the movie soft-shoes around Collora’s stubborn unwillingness to pay his directorial dues in Hollywood…and the notion that he can be a handful to work with.

If you’re watching this documentary to witness the making of a Batman short film, then it sort of ends with a whimper since the final act tracks Collora’s self-made feature film debut. It’s somewhat of a letdown, but it’s not enough to dampen some great behind-the-scenes moviemaking material that is especially inspiring for prospective DIY filmmakers. Just like Batman: Dead End reflected one man’s vision for the Caped Crusader, this Behind the Mask documentary’s portrait of Collora “was an experiment in not making compromises.”