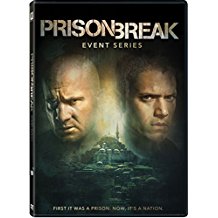 “Freedom has a price. I died 7 years ago. Left behind a brother, a wife, a son, but the dead talk if you listen. They’re there with you. Reaching out. Trying to tell us something. Because not all deaths are the same. Some are real. Some are a story. Question is: do you believe the story? Was the man who died who you thought he was? The dead talk. If you listen…”

The same can be said for dead series. Fox has been riding a wave of series revivals that have brought shows back from the dead in a limited-run event series format, and it has actually been doing well for the network. 24 was revived a couple of times. These episodes were used to take us from one lead character into another it was hoped could lead the way for a renewed franchise. While the series worked, the full revival did not. Perhaps the best example of Fox’s event series is the six-episode return of The X-Files after so many years. It was a bit inconsistent, and six episodes were too few to tell a real good X-Files story arc. The series will return again with a slightly longer run. The most recent event series at Fox was Prison Break. At nine episodes it turned out to be just the right fit to tell another story of the brothers and their cohorts. It’s now available on Blu-ray, and it’s worth a look, but only if you have watched the first four seasons of the show’s regular run. Otherwise things can get a bit confusing, and some of the nice subtle nods won’t really pay off for you at all. But if you’re a fan, it’s worth the space on your video shelf.

It’s seven years later, and Michael has been dead and buried. Sara (Callies) has married Jacob Ness (Feuerstein), and they have settled into a new life. All is quiet until T-Bag (Knepper) gets a mysterious communication. He appears to have a benefactor who gives him a state-of-the-art new hand. But that’s not all he gets. He is given a photograph that appears to show Michael alive in a Yemen prison. He tries to let Sara know about the photo, but before too long all the old familiar faces are facing attempts on their lives. For Lincoln (Purcell) it all adds up to a rescue mission to Yemen to find out if his brother is still alive. But he arrives only to find Michael is using another name and claims to not know Lincoln. So what’s going on here? That’s the question that drives the 9-hour story.

Michael faked his death to work for a rogue federal agent who uses the code name Poseidon. He has been using his prison escape skills to spring people the agent wants free. This time that includes a brutal terrorist. But of course Michael has other plans. He intends to escape, but with his own crew. Perhaps there is someone else in this prison that he really wants to rescue.

The episodes take place in two parts. Back in the United States we follow T-Bag and Sara’s attempts to stay safe and find out who the bad guy is. But starting in Yemen the season ends up recreating the classic Homer story of The Odyssey. They escape from the same place as Odysseus began his great journey. Using some of the same beats he makes his way across a vast desert and on a ship that falls to bad times. Each step of the way our heroes are being hunted by Poseidon, the namesake of the sea god who challenged Homer’s hero who, like Michael, just wants to find his way back to his wife and child. Another character is called Cyclops to make the Homer connection complete.

This is not the claustrophobic kind of Prison Break story we’ve encountered in the past. In this season, the escape is really the beginning of the tale. The characters get to operate is some wide-open environments that push them to the limit as much as the various bad guys who are trying to kill them. This is where all of the real story happens. The New York moments with Sara and even T-Bag are pretty much fluff, existing only to provide something for these characters to do and a bit of story exposition. What we are drawn toward are the brothers. That’s the tale you’re going to remember when it’s all over.

The good news is that there is still a boatload of chemistry between Wentworth Miller and Dominic Purcell. That has been evident all along for those of us who followed their roles on The Flash and Legends Of Tomorrow. Here they played brothers in crime instead of blood brothers, but the result was very much the same. These two guys work quite well together. It turns out that it was during their run together in the CW hero shows that they came up with the first idea to stage a Prison Break revival. It doesn’t really matter which show you might see them involved in. The two actors are always a treat to see together.

The supporting cast mixes a few familiar faces with some new members of the “family”. The most important for me is the return of Robert Knepper as T-Bag. He’s an often overlooked talent, but he’s always a dynamic performer. The character just doesn’t get enough to do in this limited series. That’s really too bad. But he does actually get a rather sweet story arc here that has one of the most evil characters on television searching for some kind of redemption. The funny thing is that a huge part of the story is Michael trying to give him that shot. August Prew plays a new character called Whip, who escapes with Michael and reminds him (and us) of somebody we already know. We get short cameo appearances of show regulars Rockmond Dunbar and Amaury Nolasco as C-Note and Sucre. Kunal Sharma plays Sid, and Rick Yune plays Ja, a Freddie Mercury fan who claims to have bought the dead singer’s ashes. It becomes a bit of a running gag in the show as these two newcomers join Michael’s breakout in Yemen. It’s a nice blend of old and new.

Each episode is presented in its original broadcast aspect ratio of 1.78:1. The 1080p image is arrived at with an AVC MPEG-4 codec. The episodes actually look very good for a television release. Big credit goes to Fox for releasing only three episodes per disc. That gives us brilliantly sharp images. The wonderful exotic locations look stunning here, particularly the desert episodes. The color temps change dramatically between the New York locations and the Yemen locations, which were filmed in Morocco. The New York colors are cool and a little sterile. The Yemen colors are rich in brown and yellows. Colors never really pop, but that’s not the intent here. Black levels are amazing at times. They are inky black with a lot of shadow definition. The show looks very good on these discs. This is much better than you will get streaming the show from the likes of Netflix.

The DTS-HD Master Audio 5.1 is pretty solid if not terribly aggressive. Dialog cuts through whatever else is going on. The surrounds are subtle and intended pretty much to place you realistically into these environments. Nothing stands out, but it does the job called upon in this audio presentation.

A Return Home – Making Of Prison Break: Event Series: (13:02) This feature is brief, but there’s plenty of behind-the-scenes footage, and cast and crew offer a lot of insight into the show. Of course, there’s a lot of talk about reuniting and how the revival show came to be.

So far I have been liking the idea of short event series runs for shows that just couldn’t be brought back for 20+ episodes a year. I think the people at Fox are on to something, and I wouldn’t be surprised to see other shows eventually return under this format. So if your favorite Fox show ends up getting the event return, “Now you know where you got it from.”

Gino Sassani is a member of the Southeastern Film Critic's Association (SEFCA). He is a film and television critic based in Tampa, Florida. He's also the Senior Editor here at Upcomingdiscs. Gino started reviewing films in the early 1990's as a segment of his local television show Focus. He's an award-winning recording artist for Omega Records. Gino is currently working on his 8th album Merchants & Mercenaries. Gino took over Upcomingdiscs Dec 1, 2008. He works out of a home theater he calls The Reel World. Favorite films: The Godfather, The Godfather Part II, The Body Snatcher (Val Lewton film with Karloff and Lugosi, not the pod people film), Unforgiven, Gladiator, The Lion King, Jaws, Son Of Frankenstein, The Good, The Bad And The Ugly, and Monsters, Inc.
Behind the Mask — The Batman: Dead End Story War for the Planet of the Apes