Posted in: Disc Reviews by Gino Sassani on August 10th, 2017 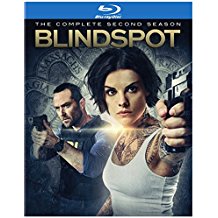 When we begin the second season of Blindspot, three months have passed since the first season’s explosive finale. We are placed back in the action with the same time having passed on the show. Jane (Alexander) has been kept at a covert CIA black ops location where she is being tortured for information. It is a fortuitous time to rejoin the action, because we arrive just in time to see her engineer a clever escape. Meanwhile Kurt Weller (Stapleton) and his team have been back to more mundane FBI cases, and it’s obvious they miss the excitement of working the tattoos. They’re about to get their wish, and things are about to get pretty intense as we join the sophomore season of Martin Gero’s Blindspot.

When Jane rejoins the team, there are now a lot of trust issues between them. She’s upset that they allowed her to be taken and tortured, and the team has learned more about the organization that sent Jane to the FBI. Enter new co-leader of the team, NSA Agent Nas Kamel, played by The Good Wife alum Archie Panjabi. She has named the organization Sandstorm because of the fearful ones she experienced as a child. She had trusted the wrong agent, and it cost lives on her team when he betrayed them. Now it’s a little personal, and she’s not going to be quick to trust Jane.

This is where the series does something rather clever. Jane is subjected to a special kind of lie-detector where she is questioned about the previous season’s events. With some well-placed flashbacks and as little exposition as possible, the show manages to get all of that “previously on” stuff out of the way. It’s actually so well done that you could jump right in with Season Two, but I’d still recommend going back to the beginning. It’s an exciting method that doesn’t make us sit through a ton of “as you know…” moments. You are quickly up to speed, and there are just enough pieces of new information to get the ball rolling.

This season the enemy gets a face…actually two faces. Jane learns what her connection is to Sandstorm, and it’s much more personal than anyone expected. The organization is run by a former military officer named Shepherd, played by Michelle Hurd. The big bad finally gets serious play, and we learn that she has even been manipulating Weller for decades. Her right hand is another close one for Jane. His name is Roman, and he’s played by Luke Mitchell. Jane also learns that she went by the name Remi before her memory wipe. It was a nod to the mythological founders of Rome, Romulus and Remus.

The show stays fresh and clever. The stakes are huge, but that doesn’t mean there isn’t room for a lot of personal moments and one of the oldest plot devices in the book. From early on we learn there is a mole in the unit, and we spend the first half of the season dealing with that tried tease. The mole is revealed and becomes part of the threat in the second half. It’s an old trick, but face it, you’ll have fun trying to figure out who it is, and they’re going to throw a lot of red herrings your way.

There’s also time for character development. It’s another plus of the series that they can keep the pace at a good clip and still have time for personal character issues. Zapata (Esparza) puts her career on the line to help Reade (Brown), who has the more compelling personal story this season. He’s dealing with the abusive coach situation from Season One, but it becomes a more intimate problem that sends him spiraling out of control to the point of being a murder suspect and drug abuse. Patterson (Johnson) finally gets back into the dating scene, but let’s just say it’s not going to work out. She ends up dealing with a ton of violations in her life this season, and she spends a bit of it on edge. Weller is going to be a father and is also dealing with the fact that his life has been manipulated by Shepherd for decades. He finally discovers why his name was on Jane’s back. Of course, for Jane it’s the discovery of her relationship with the bad guys and the emotional conflict that creates. It’s a very balanced season that continues to deliver both small and huge moments.

The show does deliver the goods with some rather sweet stunts and solid production values. Set pieces are often large, as are locations. But none of this makes the show what it is. It’s the casting of the two leads which gives makes this series above average. Jaimie Alexander is the perfect choice for Jane. She has the ability to convey a vulnerability that comes from her having her life torn from her memories, yet still be a very strong female character. Alexander somehow delivers both, often at the same time. Of course, there wasn’t much doubt that she could pull off the action parts of the role. After all, she fought alongside Thor, right? It’s a compelling performance that manages to suck you into the drama of it all.

The same goes for Sullivan Stapleton as Kurt. Fresh from his four-year gig on Strike Back, he’s a tough, edgy warrior who can pull off the emotional stuff without bringing us down into some kind of soap-opera acting. He still has a little trouble keeping the Aussie accent at bay from time to time, but he’s a solid actor, and the two share some remarkable chemistry in just a short period of time. Credit Gero for keeping the relationship complicated. Just when it seems they’ve gotten beyond one hurdle, there’s another, and the relationship constantly shifts from one of trust to hostility. Stapleton goes on a bit of an emotional rollercoaster ride here, and he does a fine job of bringing us along for those ups and downs.

Michelle Hurd is a great addition to the season. She plays a bad guy with the kind of passion and ideology that almost sucks you in to her cause. You get to understand how it is that she manages to get people to commit so hugely to the terroristic “phase 2” mayhem that she has planned. This is on a huge scale that brings in nuclear material and even the International Space Station. It’s big, but Hurd plays a wonderful face to it all.

The season will finally bring this first big story arc to a close. There will be a two-year time jump in the season’s final minutes and a device that resets the entire stage for the Season Three story. I know I’ll be there for that.

Each episode is presented in its original broadcast aspect ratio of 1.78:1. The 1080p image is arrived at with an AVC MPEG-4 codec. I do wish that Warner Brothers would start to go back to just four or five episodes per disc on their television shows instead of their standard six plus extras.  Colors are quite natural, and the image is nice and sharp. Where the bit rate causes issues is in the contrast and black levels that don’t allow those tats to come alive as much as they should. This is where better texture goes a long way. Most studios have adopted the five (max) episodes per disc. Warner needs to follow. The cost of one more disc would be well worth the investment on both sides here.

The DTS-HD Master Audio 5.1 is often alive with explosions and gunfire. It all gets a nice boost from a pretty solid bass response. Dialog is pretty solid. When the show is out on location, the surrounds provide a nice immersive experience with the most subtle of sounds. You really feel like you’re out on the street or a hidden ranch. Big thumbs up for this audio presentation.

There are deleted scenes on select episodes.

Writer’s Conspiracy – Breaking The Season: (11:18) The writing staff sits to talk about developing the second season. This is the focus point on many of the extras. There are several of these Writer’s Conspiracy features that include:

My Crazy Comic-Con Experience: (3:23) Actress Ashley Johnson takes us on her Comic-Con visit.

I have to credit Blindspot’s creator Martin Gero with providing one of the more memorable moments on television with the opening minutes of the series in the first season. We see a police officer in Times Square approach a bag with a sign on it that asks the FBI be alerted. The cop approaches the bag a bit frightened it might be a bomb and blow up on him at any time. It could have been a nice iconic moment when he opens the bag to reveal a naked woman who is covered with tattoos. She is shivering as the camera pulls back to reveal the emptied Times Square. A wonderful moment that we already saw a thousand times before the pilot aired. NBC just couldn’t help themselves, and they denied us that experience in context of the series premiere. Still, it was a powerful beginning, and Season Two didn’t let us down. There’s a complete reset as the season closes. “Rebuild and get ready for the next one.”

Gino Sassani is a member of the Southeastern Film Critic's Association (SEFCA). He is a film and television critic based in Tampa, Florida. He's also the Senior Editor here at Upcomingdiscs. Gino started reviewing films in the early 1990's as a segment of his local television show Focus. He's an award-winning recording artist for Omega Records. Gino is currently working on his 8th album Merchants & Mercenaries. Gino took over Upcomingdiscs Dec 1, 2008. He works out of a home theater he calls The Reel World. Favorite films: The Godfather, The Godfather Part II, The Body Snatcher (Val Lewton film with Karloff and Lugosi, not the pod people film), Unforgiven, Gladiator, The Lion King, Jaws, Son Of Frankenstein, The Good, The Bad And The Ugly, and Monsters, Inc.
Bender Big Little Lies (Blu-ray)