Posted in: Disc Reviews by Gino Sassani on August 15th, 2017 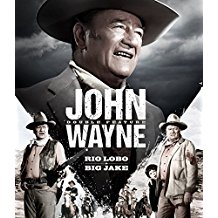 That man, of course, is John Wayne. They called him The Duke, and he was indeed western cinema royalty for six decades. He represented the American ideal of the tough guy who stood up for the weak and didn’t shy away from a fight. His characters usually worked hard, and they played just as hard. He had a unique way of turning a phrase and has been one of the most widely impersonated Hollywood voices. By the time the 1970’s rolled around, Wayne was coming to the end of a long career. Some of these later roles showed a somewhat softer side to The Duke, and he was rarely doing any of his own stunts. Two of those later films were Rio Lobo and Big Jake. They aren’t two of his most prominent roles and haven’t had much of a wide release in the days since their release. They would show up on late show broadcasts, and Rio Lobo had yet to reach high definition and Blu-ray release. CBS changes that little oversight with a nice package they call a John Wayne Double Feature. For those of us who remember the days of the double feature, these two films fit the double-bill quite nicely. Here are two of the better John Wayne films that you likely have never seen, at least uncut and in high definition.

Rio Lobo brings together not one but two Hollywood legends at the end of their iconic careers. John Wayne would continue on for only another five years. Legendary director Howard Hawks wrapped up one of the most amazing directing careers with this film. Howard Hawks worked with John Wayne previously, as he did with all of the Hollywood superstars from that era. Boris Karloff and gangster actor George Raft teamed with Hawks in the original Scarface. He directed Douglas Fairbanks Jr. in The Dawn Patrol, Cary Grant in Sergeant York, Bogart & Bacall in The Big Sleep, Marilyn Monroe in Gentleman Prefer Blonds, and many other huge stars. But John Wayne was one of his favorites, and they worked together on many films over their careers. It seems somewhat appropriate that they would join together for his last picture.

It’s the waning days of the Civil War, and Col. Cord McNally (Wayne) is in charge of Union gold shipments by train. A band of rebels has been intercepting these shipments, and one of McNally’s best officers is killed in a rather clever heist that opens the film. He manages to capture two of the rebels, but they won’t talk. What McNally wants more than the return of the gold is the name of the man in his own ranks who supplied the tip that led to the robbery.

Finally, the war comes to an end, and McNally finds himself once again in the company of newly released POW’s Captain Cordona (Rivero) and Sgt. Tuscarora Phillips (Mitchum), his former captured rebels. The end of the war means the end of hostility, and they agree to help him discover the rat in McNally’s old outfit. A series of events leads them to the city of Rio Lobo, where a band of bullies have taken over the law in the town. They’re stealing land, and that includes Phillips’ father’s land. Along the way they find Shasta (O’Neill), who has had her own run-in with the bad guys. With all of their fortunes combined, they go up against the crew of bandits.

Wayne and Hawks were both beyond the days of invention. This film was intended as a dose of good old nostalgia even for the 1970 audiences who saw it at the box office. There’s not so much action and shootouts here. But it demonstrates how comfortable Wayne had gotten with his on-screen persona. Many claim Wayne really only played one character, and while that’s hardly true or fair, by now it was essentially so. But it’s that comfort that makes this such an easy film to watch. No one’s trying to push any envelopes. It’s a simple story with a collection of fine characters played by exceptional actors. Rio Lobo is more a reward for the duo’s fans. It’s the kind of film that only works if you’ve earned it from many years of delivering the goods.

“The problem with money, though, is that there’s always somebody wants to take it away from you. Still, that’s the only problem with it. And ain’t that the bloody truth?”

Big Jake was very much a family affair for the Wayne family. It was produced by son Michael Wayne and also starred sons Patrick and Ethan, who played the young grandson. The film also starred Wayne Family friend Robert Mitchum’s son Christopher. Horror fans will be delighted to find John Agar in this picture, as well. Television fans will appreciate Richard Boone of Have Gun Will Travel fame. It was directed by George Sherman and John Wayne himself. The film also recalls shades of Clint Eastwood, but surprisingly not any of his Westerns. The film was written by Harry and Rita Fink, who also happened to pen and create a character named Dirty Harry that same year. There’s even a role with singer Bobby Vinton included in this production. That’s a lot of stuff to look for while you’re enjoying the film.

A group of bandits kidnap young “Little” Jake McCandles. Most of the ranch’s family and work crew are killed in the brutal assault. The mother is left alive so that she can deliver a million dollars in ransom for the boy. The only person she can turn to is the child’s estranged grandfather, Jacob (Wayne). The boys are not pleased to be working with their father, but of course they band together to go after the bandits and bring the kid back alive.

This film is more about the journey than the destination. The film offers up those stunning western vistas that directors like John Ford were so famous for filming. McCandles makes his way to the bandits while trying to re-bond with his two sons. The film actually does a great job of bridging the old-style western with the era that followed. We get motorcycle stunts in this one.

Each film is presented in its original aspect ratio. There is some evidence that the prints were cleaned, but nothing on the order of a complete restoration. Colors remain faded a bit, most likely due to the age and film stock. You get fair black levels and few film artifacts. There’s nothing distracting here, and I credit CBS for providing each film on its own disc. That leaves enough breathing room to give us something better than the television prints, which were usually an absolute mess.

The DTS-HD Master Audio 5.1 is not really going to blow you away with aggressive surrounds or even very deep subs. This is really a reproduction of a mono source material, and it would not have been appropriate to mess with the mix in order to excite the surround presentation. The audio is merely expanded to feel a bit deeper than it once was. It’s clean and free of noise. That’s the best you can hope for here, really it is.

John Wayne has become pretty much a mythological figure in the days since he’s gone. Many of his films have been remade, usually with lackluster results. The notable exception here is the recent True Grit. These are good matinee films that would be a nice place to warm up with the family on a rainy day. Now somebody is going to complain about the dated effects or presentation. “Now what did you have to go and do that for?”

Gino Sassani is a member of the Southeastern Film Critic's Association (SEFCA). He is a film and television critic based in Tampa, Florida. He's also the Senior Editor here at Upcomingdiscs. Gino started reviewing films in the early 1990's as a segment of his local television show Focus. He's an award-winning recording artist for Omega Records. Gino is currently working on his 8th album Merchants & Mercenaries. Gino took over Upcomingdiscs Dec 1, 2008. He works out of a home theater he calls The Reel World. Favorite films: The Godfather, The Godfather Part II, The Body Snatcher (Val Lewton film with Karloff and Lugosi, not the pod people film), Unforgiven, Gladiator, The Lion King, Jaws, Son Of Frankenstein, The Good, The Bad And The Ugly, and Monsters, Inc.
King Arthur: Legend of the Sword (UHD Blu-ray) (4K) The Lincoln Lawyer (UHD Blu-ray) (4K)