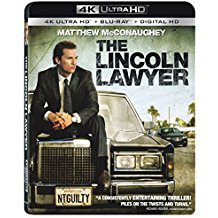 Suspenseful, intriguing, and exciting, The Lincoln Lawyer makes the legal system entertaining.  With all the TV attorney shows pushing for top ratings, this film comes at the right time.  A strong cast, excellent direction, and a riveting storyline make The Lincoln Lawyer a must-see. Mick Haller (Matthew McConaughey) keeps his legal business close to him, in his car.  Defending the lowlifes or whoever desperately needs legal assistance, Mick turns down very few clients.  While working on a questionable case, his confidant Val Valenzuela (John Leguizamo) gives him the name of Beverly Hills playboy Louis Roulet (Ryan Phillippe).

This client will pay big money to get him off for battery and rape. It’s the case of a lifetime, and Mick knows it.  Suspicious of the client, however, he brings on his friend Frank Levin (William H. Macy), a private detective. When they start getting conflicting evidence, Mick starts to get distrustful of Roulet.

McConaughey, Leguizamo, and Macy work nicely together, easily bringing out the sleazy ways Mick does business.  But the strong performance of Phillippe in his role as the guiltless client makes the script work.  I was totally engrossed in the film watching every twist and turn right to the nearly unpredictable turn of events at the end.

Excellent direction by Brad Furman helps in crafting The Lincoln Lawyer into a good show.  His ability to maneuver the characters into realistic situations that create suspense with creative conflict makes this film work.  The only thing that comes in question is “Did he write McConaughey taking off his shirt into the film, or was it his star’s way of leaving his usual mark?”

The Lincoln Lawyer is rated R for some violence, sexual content, and language.

The Lincoln Lawyer is presented in its original aspect ratio of 2.35:1. The ultra-high-definition  image is arrived at by an HEVC codec with an average bitrate of 65mbps. The ultra-high-definition image presentation is faithful to the cinematic and Blu-ray versions of the film. The improvement is found mostly in sharper small details. You can read text on papers that were a blur previously. Black levels also exhibit a distinct improvement. There’s plenty of nice shadow detail here. Character close-ups reveal some truly remarkable detail, maybe too much. Colors are pretty natural. I expected the city shots to pop a little bit more with the HDR presentation, but colors overall are somewhat subdued by design.

The Dolby Atmos presentation defaults to a 7.1 track. This is obviously a dialog-centric film. The audio presentation exists entirely to service that part of the movie. The score is a bit urban and thick with lows. There are enough surrounds to bring you into the exterior scenes, mostly when the characters are driving around the city. You get superb clarity. It’s all about the characters, and that’s how you should approach this one.

The extras are on both the UHD and Blu-ray copies. I would rather the UHD be limited to the film and save the bit rate for what really matters:

Making The Case – Creating The Lincoln Lawyer: (13:40) The author talks about getting the story to screen and his need to step back and let the filmmakers do their job. Cast and crew also contribute their thoughts on the material itself. There’s a rather intimate look at the character led by Matthew McConaughey.

Michael Connelly – At Home On The Road: (10:16) The author takes us on an L.A. tour of some of the film’s crucial locations and places he associates with creating the material.

One On One With McConaughey and Connelly: (5:28) The two ask each other questions.

Deleted Scenes: (4:07) There are four with a play-all option

A killer of a thriller.

John Delia has been on all sides of the movie business from publicity, writing for publications and on line blogs, script writing, to film making. Writer, critic, film editor he has worked as a film critic on this second go around for 14 years. He earned his Bachelor’s degree at the college of Journalism and Communications at the University of Florida in Gainesville, Florida. John is an active member of the Southeastern Film Critics Association (SEFCA) . Favorite Films: Lord of the Rings/Hobbit trilogies, The Godfather trilogy, the Indiana Jones trilogy (I didn't like the 4th), The Avengers and for TV it's Game of Thrones. As for animation it's a tie between anything Pixar and everything Hayao Miyazaki.
John Wayne Double Feature Rio Lobo/Big Jake (Blu-ray) Tuesday Round Up: August 15, 2017