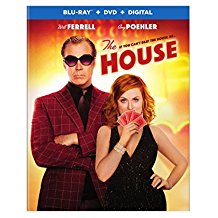 – “You know what they say…the house always wins.”

The House, a funny and oddly violent comedy starring Saturday Night Live alums Will Ferrell and Amy Poehler, has a great premise. Whereas most movies road trip their way to Sin City in order to cut loose, The House is about what happens when you import the glitz and glamor (and seediness) of Vegas into suburbia. The bad news is the filmmakers here don’t do much to develop their killer concept. The good news is The House is chock full of talented improvisers eager to pick up the slack.

Scott and Kate Johansen (Ferrell and Poehler) are a square married couple whose daughter Alex (Ryan Simpkins) is about to go to college. Unfortunately, the community scholarship that Scott and Kate were counting on in order to send Alex to her dream school is unexpectedly snatched away by greedy City Councilman Bob Schaeffer (Nick Kroll). Since Scott and Kate are played by goofballs like Ferrell and Poehler, we know that they haven’t been responsible with their money. (It’s dumb, but I laughed out loud at the bit where they misunderstand what a 401k is.)

Desperate for money, Scott and Kate turn to their even more desperate friend Frank (Jason Mantzoukas), who is in the process of being dumped by his wife. After an ill-fated gambling trip, Frank, Scott, and Kate decide to establish an illegal casino in Frank’s house so Scott and Kate can afford to send Alex to college. (Frank, meanwhile, just needs something to do.) Turns out the trio has a knack for being badasses, which attracts the attention of crooked Councilman Bob…and an even more dangerous criminal element (played by…you’ll have to see for yourself).

The House is the feature directorial debut of Andrew Jay Cohen, who also co-wrote the script with Brendan O’Brien. The pair is best known for writing Neighbors, which explored the angst adults of a certain age feel when they can spot middle age coming down the street. The House grazes up against soon-to-be-empty nesters Scott and Kate having no identity once Alex departs for college, but it doesn’t really follow that thread.

In the movie’s defense, I can see why the filmmakers decided to focus their attention on the “suburbanites behaving badly” shenanigans. The House specifically namechecks Casino once Scott and Kate begin to embrace their inner kingpins, and my heart warmed when they started playing The Sopranos theme song during once scene. It also results in more screen time for the movie’s talented supporting players. In addition to Kroll, the cast is comprised of comics like Rob Huebel, Lennon Parham, Andrea Savage, Cedric Yarbrough and others who don’t have the name-recognition of Ferrell and Poehler. But chances are you’ve laughed at something they’ve done over the last decade. (My personal favorite supporting player here is good-natured, pool-loving Rory Scovel.)

For their part, Ferrell and Poehler, appear to be on cruise control, which isn’t totally an insult since taking a step back allows some of their lesser-known co-stars to shine. There’s a funny bit involving Scott and his discomfort with numbers, while Kate refreshingly is more enthusiastic about the illegal casino than Scott. (Usually the wife is the wet blanket in this scenario.) But even though Scott and Kate adopt different personas once they break bad, I don’t see “The Butcher” and “The Burner” enduring as long as some of Ferrell and Poehler’s previous comic creations. Out of the three leads, I personally enjoyed Mantzoukas’ friendly, well-meaning scumbaggery the most.

Speaking of butchery and burning stuff, The House has several jarringly violent moments that don’t quite land; the overall tone feels too silly and jovial for such extreme violence, but the dismemberments aren’t quite slapstick-y enough to be Naked Gun-funny.

Even at a slim 88 minutes, The House feels stretched pretty thin without much to prop up the shenanigans at Frank’s casino. On the other hand, I’m grateful the filmmakers didn’t inflate this ridiculous movie’s running time beyond 2 hours. The piles of alternate takes and discarded punchlines can be found in the Special Features section, but first…

The House is presented in an aspect ratio of 2.40:1. The 1080p image is arrived at with an AVC MPEG-4 codec at an average of 27 mbps. The opening scene at Bucknell University’s campus establishes the movie’s sunny, suburban look. Flesh tones are generally nice and warm, but they really ignite when the neon signs in Frank’s casino (and the garish suits that Scott starts wearing) barge into the picture. Black levels are nice and inky during a handful of nighttime scenes. Meanwhile the parts of the movie that are (figuratively) dark result in vibrant spurts of blood. Overall, this is a clean image that pops a lot more than you’d expect from a typical comedy.

The DTS-HD Master Audio 5.1 track is as dialogue-heavy as most comedies, but — as with the visual presentation — there’s also a lot more. That includes some thumping bass when Scott, Kate, and Frank first visit a casino; the music during this sequence gives the subs a nice workout. The track’s bottom end also provides some extra oomph during the brutal woman-on-woman fight. There is generally a consistent amount of activity in the rear speakers, particularly during any sequence in Frank’s homemade casino. On top of that, we get at least one fun instance of directionality when an off-screen heckler curses at Scott, and the sound comes from the left rear speaker.

The House — Playing with a Loaded Deck: (12:47) This featurette focuses on the overwhelming comedic talent in the cast. Even though, Ferrell and Poehler were SNL standouts, The House is actually the first time they’ve worked together in a significant way. Meanwhile, the movie’s supporting cast is referred to as a “comedy nerd’s paradise” of gifted improvisers.

If You Build The House, They Will Come: (13:43) This is actually my favorite featurette on this disc. Production designer Clayton Hartley put an incredible amount of thought — probably too much thought for such a goofy comedy — into how the various stages of Frank’s residential casino would look. We also get a breakdown of the brutal fight sequence between actresses Lennon Parham and Andrea Savage.

Deleted Scenes: (15:43) This is actually a pretty strong collection of scenes, including a yogurt shop alternate opening that introduces many of the supporting characters and an explanation of why the elderly woman from the movie’s third act hates City Councilman Bob so much.

Extended/Alternate Scenes: (1:19:54) We get longer and alternate versions for many of the film’s sequences. There’s some really funny stuff here, and there is *a lot* of it. (As you can see from the feature-length running time.) Considering all the material that was left on the cutting room floor, I’m actually pretty impressed the movie settled on a tight 88-minute running time.

Gag Reel: (9:57) There are some amusing moments here, but this gag reel is a little long and a lot redundant considering all the laughs that can be found in the deleted/extended/alternate scenes.

Line-O-Ramas: (8:41) Same goes for these line-o-ramas, although it’s always fun to watch improvisers do their thing. (The biggest winner here is Frank’s “Gorilla in a Baseball Hat.”)

There’s no two ways about it…The House crapped out both with critics and at the box office. It may sound like I’m about to damn it with faint praise, but this movie is not nearly as bad as those numbers would have you suggest. In fact, I legitimately laughed out loud more than a handful of times.

Don’t so much pick this one up expecting another iconic Ferrell comedic performance. Instead, go in with the mindset that you’re going to watch a bunch of funny friends goof off with one another after somebody came up with a cool idea for a movie. And even if you don’t care for the theatrical cut, there are plenty of deleted/alternate/extended scenes to craft a comedy that is more your taste.