Posted in: Disc Reviews by Brent Lorentson on October 18th, 2017 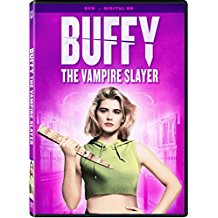 It’s hard to believe it was way back in 1992 when Buffy the Vampire Slayer was first introduced to audiences. It was a title I had missed in the theaters, but I remember picking it up at our local mom-and-pop video store.  With the title being what it was, to go in expecting more than a cheesy horror comedy filled with stakes, fangs, and witty dialog would be on the viewer.  I wasn’t a huge fan of the film when I first saw it. I sort of felt like it was a film that was trying to be Fright Night, but let’s face it, there are very few vampire films that are as cool.  It’s been over two decades since I last visited the film; how does it hold up?  Well, to be honest, it’s grown on me quite a bit.

Kristy Swanson plays Buffy, the vampire slayer that attempts to juggle a social life as a cheerleader while discovering that she is also a vampire slayer.  She’s one of the girls who would fit in perfectly with the girls from Clueless and is the typical 90’s pretty girl, but this film works well at developing an arc that turns her into a badass by the time the closing credits roll.  While she’s more concerned with impressing her friends and trying to stay fashion-forward, we see that vampires are killing off fellow classmates and many others around town.

While Buffy is busy working on new cheers, Merrick (Donald Sutherland) is attempting to convince Buffy that she is the chosen one who is destined to fight the vampires.  It’s hard to imagine how groundbreaking this film really was, but it was one of the first mainstream genre films that views the female lead as the hero and the male suitor as the damsel in distress.  Pike (Luke Perry) is the typical loveable outcast and does well being the charming love interest, and each time we see him step in to be the hero, it is always Buffy who ends up stealing the spotlight. This is a big deal twenty years ago, whereas now even considering developing a female character as “weak” is enough to cause outrage.

Stepping in to play the big bad of the film is Rutger Hauer, who haunts Buffy in her dreams; he’s killed countless slayers before, and of course has plans to kill Buffy as well. Considering he’s the big bad of the film, he isn’t much of a menace in the film; instead it’s his right-hand man Amilyn (Paul Reubens) who steals the film. Between the makeup and wardrobe, it’s hard to realize this is the same guy that is Pee Wee, but this is one of those roles that it is so much fun to see him work.

What bugs me about the film is that it lacks anything that resembles atmosphere. It’s shot as a comedy and simply has nothing that is mood-setting.  Even the film’s action sequences are a bit flat on delivery; I’m not going in expecting great choreography or camera work, but it would have been nice if it at least resembled a horror film.

Buffy the Vampire Slayer is presented in the aspect ratio 1.85:1.  The 1080p image is arrived at with an AVC MPEG-4 codec at an average of 31 mbps.  As I mentioned, this is shot more as a comedy, so the film is a lot brighter than what you’d expect in a horror film. This is a nice film transfer where the grain from being shot on film still is evident, but it is subtle.  We get plenty of detail, and the flesh tones look nice here.  There is some nice separation in the blacks and darks, but nothing overly impressive.

The DTS HD-Master Audio 7.1 is a well done mix.  There are a lot of ambient tones and drones that play through the film to attempt to develop some mysterious atmosphere, but really there is only so much that can be done. The dialog is clean throughout, but most impressive are the impacts and the whoosh effects when weapons are spun or flung through the air.

Featurette: (4 minutes) Considering this is a special anniversary for a film that set up the release of one of Fox’s major TV programs, it’s a shame all we get is this standard behind-the-scenes featurette.

After 25 years, this film has aged nicely for me.  This is one of those films that are perfect for this time a year to watch with someone who may not be the biggest fan of horror. While the clothes and hairstyles may be dated, and at times the dialog may seem like it’s a foreign language for some, the film still is fun and comes in just under 90 minutes. As a side note, it’s fun to see the film has some noteworthy co-stars with Hilary Swank, David Arquette, and Stephen Root making appearances in the film.

Brent Lorentson is a horror writer and film critic based out of Tampa, Florida. With a BA in Digital Film, he co-wrote and co-directed Scavenger Hunt. His short stories have appeared in various horror anthologies. In 2019 his short script Fertile Blood will be a part of the anthology horror film Slumber Party. He is currently working on his first novel A Dark and Secret Place set to be released in late 2019. Favorite Films: Taxi Driver, Fight Club, I Saw the Devil, The Wild Bunch, Dawn of the Dead, A Clockwork Orange, Pulp Fiction, Heathers, The Monster Squad, and High Fidelity.
The House (Blu-ray) Reign: The Complete Fourth Season