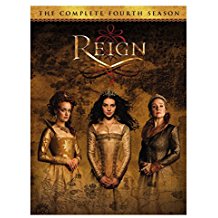 “How many more people will you sacrifice?”

When it premiered in 2013, Reign was an effective bit of counterprogramming for the CW, which continues to be ruled by superheroes, vampires, and other Supernatural beings. Even as Reign appalled historians, the series quickly established itself as a campy and compulsively watchable take on the saga of Mary, Queen of Scots. Unfortunately as the show progressed through Mary’s tragic life, Reign inevitably lost some key players. The result is a show that got more convoluted and less interesting as it limped toward its fourth and final season.

“When there are two queens vying for the same throne, only one can survive.”

Season 4 begins with Queen Mary (Adelaide Kane) back in her native Scotland alongside half-brother James (Dan Jeannotte) and trying to balance her country’s warring Catholic and Protestant factions. Meanwhile, Mary’s cousin — Queen Elizabeth I of England (Rachel Skarsten) — still views her as a potential challenger to her own throne and constantly makes moves to undermine Mary’s growing influence, including trying to block Mary’s strategic marriage to Lord Darnley (Will Kemp).

And even though Mary is firmly back in her home country and serving as its ruler, the show still follows all the intrigue in French court, where Mary spent the early part of her life. Catherine de Medici (Megan Follows) continues to pull the strings as her surly son Charles IX (Spencer McPherson) sits on France’s throne, while youngest daughter Claude (Rose Williams) fends off suitors in the hope that her presumed dead true love Leith (Jonathan Keltz) will come back to her. French court is shaken up when Catherine’s oldest daughter Leeza (Anastasia Phillips) returns; Leeza is married to the King of Spain, which has been propping France up economically. Let’s just say Leeza has a lot of unresolved mommy issues she works through with Catherine.

In my opinion, Reign was most effective when it leaned into its soapy trashiness. You can roll your eyes at the oh-so-typical love triangle that ignited a lot of the drama in season 1 — Mary being torn between king-to-be Francis II (Toby Regbo) and black sheep bastard Sebastian (Torrance Coombs) — but a simple story told with flair is always effective. In other words, the hook with Reign was recasting history as a Twilight/Hunger Games-style bodice ripper.

Season 4 of Reign desperately needed more relatable drama. Watching Mary agonize over antagonizing Scotland’s Catholic and Protestant factions isn’t nearly as interesting as the show seems to think it is. A big problem is that the series barely spends any time exploring what Catholics and Protestants believe…or why we should care about any of it. The closest we come to relatable drama here is the notion that Catherine’s arc in season 4 basically consists of trying to wrangle all of her bratty children. (Nick Slater shows up about halfway through this final season as Henry of Valois, Charles’ brother and a threat to his throne.)

Simply put, every episode of Reign is too jam-packed for its tight 42-minute window. Forgive me, George R.R. Martin, for I am about to compare Reigns to Game of Thrones, but the lavish HBO fantasy drama is at its best when it zeroes in on its many characters and gives them space to develop. (That means we sometimes don’t see crucial players for weeks at a time.) Reign, on the other hand, insists on including everything that happens in Scotland, England, and French court in each of its 16 episodes. That leads to betrayals and alliances happening at a breakneck pace — especially when you’re binge watching the show — and characters that barely register.

Kane remains a compelling performer at the center of the series as strong-willed Mary. By the start of season 4, the Scottish queen has lost the man she loved (Francis) and her best friend (Anna Popplewell’s Lola), and Kane’s performance is appropriately hardened. I didn’t really care for Skarsten’s work last season, but season 4 thankfully gives the actress more layers to play with as Elizabeth is alternately paranoid, lustful, and compassionate. (Ok, she’s still mostly paranoid.) The fact that Mary and Elizabeth’s rivalry remains completely abstract saps a lot of the drama. (Reign is already making a mess out of history, so why not put these two in a room together?) Mary is also mostly separated from former nemesis Catherine, but I actually grew to appreciate their mutual respect.

Otherwise, season 4 of Reign is a parade of interchangeable, ludicrously handsome guys in their 20’s/early 30’s vying for the affections of Mary, Elizabeth, and Claude. The only ones who make an impression are Kemp’s conflicted Lord Darnley and Adam Croasdell’s Bothwell (looking like a poor man’s Hugh Jackman). However, the show’s alpha male remains scheming Lord Chancellor Stephan Narcisse (Craig Parker), the only cast member who appears to be having fun with how silly this show is.

Reign still pulls off some of its old tricks — season 4’s orchestral cover of a pop song, courtesy of Vitamin String Quartet, is Ellie Goulding’s “Love Me Like You Do” — but it mostly falls back on bad habits. The dialogue is consistently clunky in each episode, with everyone having to spout a ridiculous amount of exposition. (The series can’t afford to show us everything that’s happening on a CW budget.) Characters also awkwardly insert names into conversations to remind us who everyone is, which leads to exchanges like Catherine telling her daughter, “Tell me, how is your husband King Phillip?” Promising storylines — like Queen Elizabeth commissioning John Hawkins to explore the New World — are dropped in order to focus on the season’s central theme of powerful woman who have to eschew true love in favor of strategic unions. It’s not fun for the monarchs, and it’s certainly not fun for us.

Reign: The Fourth and Final Season features all 16 episodes on three discs. As with last year’s season 3 DVD release, there are no special features on this set. Season 4 picks up the pace in its last three episodes, and the rushed finale (which includes a jarring time jump) ends with a surprisingly touching montage that also brings back a dearly departed favorite. However, it’s not quite enough to make up for what is mostly a slog of a final season.