Posted in: Disc Reviews by Gino Sassani on November 7th, 2017 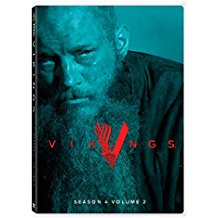 This is quite a step up for the History Channel folks. They’ve certainly produced a great number of historical dramatizations and documentaries, but nothing they’ve ever done before compares with this series. We used to review a ton of their stuff here for years, so you know I’ve liked a lot of the things they’ve done. But Vikings puts them in a totally new stratosphere. This is historical drama that you’ve only seen before in the likes of Rome or The Tudors. Of course, there’s a very good reason for that. Michael Hirst created the series and is the creative force behind it. He served the same positions on The Tudors. That puts expectations here very high, and the show has met or exceeded them all.
The final moments of the first half of Season 4 takes a many-years jump forward in time. Ragnor (Fimmel) has abdicated his power and has been missing since the failed siege of Paris. Bjorn (Ludwig) has pretty much taken over as leader of the group. His younger sons have now grown into men and of course are now played by different actors. The most significant of these new castings is Alex Hogh as the grown Iver. The actor bears a rather striking resemblance to Travis Fimmel, and Hogh also does a remarkable job of pulling many of Fimmel’s nuances into his character. He may not be able to walk, but it’s clear that it is Iver who has inhiereted his father’s strengths and personality. This is brought out even more when Ragnor suddenly returns. He has plans to return to England and avenge the slaughtered settlement he left there years ago. Bjorn wishes to follow his own path and explore the fabled Mediterranean Sea. Iver is the lone son who wishes to join his absent father. It becomes the end of Ragnor’s story and really the beginning of Iver’s to some extent.

The series does a pretty good job of bringing the culture and lifestyle of the Viking people to life for us. There is a great effort toward authenticity. That isn’t to say that the show claims to be historically accurate. The Vikings were not a literate people. They did not keep a written record of their lives. What is known has been pieced together through artifacts and stories that were handed down orally from generation to generation. It’s not even possible to depict the culture with any precision or accuracy. When you watch a film or a series like this, you need to be mindful of the difference between authenticity and accuracy. They are not the same things and shouldn’t be confused here. Authenticity means that there’s an attempt to portray the world in a faithful way. We’re talking costumes, weapons, beliefs, lifestyles and environment. That’s not to say that the film is attempting to tell a “true” story. Only one that feels true. Accuracy is intended to educate. This kind of a show is intended to entertain, and the authentic presentation is there to immerse us realistically in the world in order for us to care about the characters and events. The Vikings does this with a sweeping eye toward detail. The world comes alive for us, and we can be swept up in the events.

Each episode is presented in its original aspect ratio of 1.78:1. The 1080p image is arrived at with an AVC MPEG-4 codec. The high-definition image presentation is true to the broadcast quality and then some. You’ll appreciate the textures particularly. This is a rather dirty world, and the production design has coated everything in that layer of mud or dirt. The presentation delivers it. There are also some stunning vistas here, and the cinematography is something to behold. The transfer here delivers that painstaking effort. The image is sharp and crystal clear. The color palette is often cold. I’m impressed at how the show’s lighting gives us a wonderful indication of climate. Seasonal changes show wonderfully in the shape and quality of the light. Black levels are pretty much inky black. There is one instance of a serious flaw. A couple of the scenes in the French Court during the attack on Paris appear to have odd focus issues. One instance was hard enough on my eyes that it started to cause a headache. I believe it is likely connected to the greenscreen work and an issue blending it into the set.

The Queen And The Shield Maiden: (8:41) A look at the lives of women in Viking times through the two main female characters.

Vikings, Valhalla And The Legacy Of Ragnor: (9:12) This feature looks at Viking beliefs on fate, destiny, and death.

The Journeys Of Bjorn Ironside: This is an interactive map with features on various places.

The series is filmed in Ireland, where many of the coastal cliffs and mountains provide a nice backdrop to these stories. Hirch takes the time to allow us to delve into these environments and the cultural aspects of the people. These stories are not told in a vacuum. Again, it’s that term: authenticity, and you can’t say enough about how it shapes the experience as a viewer. That’s the right term for this show. You don’t watch it; rather, you experience it. Things will change now that King Ragnor is gone from the show. He was a strong force in the series. Now the question is, “Who wants to be the King?”

Gino Sassani is a member of the Southeastern Film Critic's Association (SEFCA). He is a film and television critic based in Tampa, Florida. He's also the Senior Editor here at Upcomingdiscs. Gino started reviewing films in the early 1990's as a segment of his local television show Focus. He's an award-winning recording artist for Omega Records. Gino is currently working on his 8th album Merchants & Mercenaries. Gino took over Upcomingdiscs Dec 1, 2008. He works out of a home theater he calls The Reel World. Favorite films: The Godfather, The Godfather Part II, The Body Snatcher (Val Lewton film with Karloff and Lugosi, not the pod people film), Unforgiven, Gladiator, The Lion King, Jaws, Son Of Frankenstein, The Good, The Bad And The Ugly, and Monsters, Inc.
Tuesday Round Up: November 7, 2017 Westworld: Season One — The Maze (UHD Blu-ray) (4K)