Posted in: Disc Reviews by Brent Lorentson on November 29th, 2017 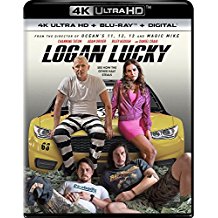 When Steven Soderbergh announced his retirement from directing films in 2013, it was an announcement that was followed by shock and disappointment for fans and others in the industry.  He was a workhorse who managed to deliver a variety of art house titles (The Girlfriend Experience) and then numerous successful blockbusters (Ocean’s 11, 12 & 13) that seemed to always allow him to make films by his own rules. Soderbergh makes his return to film with a heist film that uses West Virginia as its backdrop and NASCAR as its target. It’s familiar subject matter, but it’s the characters that separate this film from the rest of the pack.

Jimmy Logan (Channing Tatum) is a construction worker with a bum leg who is trying to do the best he can for his daughter, Sadie (Farrah Mackenzie) of whom he shares custody with his ex-wife, played by Katie Holmes. Jimmy enjoyed his glory days being the small town football hero till his injury resulted in him losing anything resembling a future in sports.  He’s not a guy making excuses for himself, as his pride and joy is put into his daughter, and it’s his interactions with her that has the film laying its charm on the audience. Then there is Clyde Logan (Adam Driver), Jimmy’s brother, who lost his arm while serving in the military and now works as a bartender. The chemistry is odd at first, but it works. All the characters we meet through the progression of the film seem to have their own quirks and uniqueness that feels as though the film is sort of channeling the Coen brothers.

When Jimmy loses his job as well as facing the possibility of seeing his daughter less when his wife tells him that she and the new husband are planning to move out of state,  it seems to take no time at all for Jimmy to come out with his plan to rob the nearby racetrack. To pull off this heist they need to acquire the aid of the infamous safecracker Joe Bang (Daniel Craig), who is currently serving time behind bars.  So the film becomes not only a heist film, but a prison break film as well. Sprinkle in a few other country misfits, and you have the extremely entertaining team that is set up to pull off this crime.  Looming over Jimmy’s shoulder is the infamous Logan curse that seems to motivate him to make sure every move is made just right and surprisingly will keep the audience guessing about the team’s success up until the final credits roll.

Soderbergh takes many of his own cues from his work on the Ocean’s 11,12,& 13 films, but it never feels recycled as it maintains its fun and rhythm through most of the film. Following the heist the film does seem to slow down a bit and does take a turn (not quite a plot twist). While I’ve heard others complain about this shift, for me it’s a shift that helps remind us who these characters are and why we’ve grown to root for them. With a script that crackles with fun, punchy dialogue, first time screenwriter Rebecca Blunt is the one to thank for delivering a script that takes a familiar trope and injects it with charm.

I first saw this upon its release in the summer, and I was surprised by its lukewarm reception considering people complain about nothing but sequels and superhero films filling the screens.  This was definitely one of the gems of the summer, and at this point I feel comfortable saying that this is the best comedy of the year to date.

Logan Lucky is presented in its original aspect ratio of 2.40:1. The ultra-high-definition 2160p  image is arrived at by an HEVC codec with an absolutely spectacular average bitrate of 75 mbps. This ultra-high-definition image presentation is about as natural as they come. This film doesn’t appear to use much color correction, so you get a bright and realistic image. One of the abilities of HDR is to reproduce areas of brightness that can be almost blinding hot while still maintaining level brightness elsewhere in the film. The very best example I have seen to date of that ability is when you see the machines operating under the raceway in the beginning of the film. The headlights of the earthmover stab at you and actually made me wince as if I were actually looking at bright headlights. All the while the remaining image retained its dark underground presentation. Black levels and contrast are excellent here. Colors pop, particularly with the cars in the race. It’s the UHD level of detail that keeps the lettering on these cars clear and not so much of a blur.

The DTS:X presentation defaults to just a 5.1 track. The image is outstanding, but the audio is sub-par for a UHD release. This likely sounds pretty solid on Blu-ray, but I expected more. There are so many wasted opportunities for wonderful surrounds. You have a heist going down in an underground tunnel. You have cars racing around a track, and you have tons of crowd scenes. None of these moments shines in this audio presentation. Even the subs run a little light. The dialog comes through, and sure, that’s an important part of this clever film. But it could have been so much better.

Deleted Scenes: (3:53) We only get a pair of deleted scenes. One is of Joe Bang explaining how he decides on a job, and, well, the other is of an inmate tap dancing.

This is simply one of those films that put you in a good mood.  It’s not trying to win awards or be flashy; instead this is simply a film that wants to entertain you for two hours, and it succeeds in doing so. Hopefully this film is just a starting point for what we can expect down the road from Soderbergh and his merry band of West Virginian thieves.

Brent Lorentson is a horror writer and film critic based out of Tampa, Florida. With a BA in Digital Film, he co-wrote and co-directed Scavenger Hunt. His short stories have appeared in various horror anthologies. In 2019 his short script Fertile Blood will be a part of the anthology horror film Slumber Party. He is currently working on his first novel A Dark and Secret Place set to be released in late 2019. Favorite Films: Taxi Driver, Fight Club, I Saw the Devil, The Wild Bunch, Dawn of the Dead, A Clockwork Orange, Pulp Fiction, Heathers, The Monster Squad, and High Fidelity.
Misery: Collector’s Edition (Blu-ray) Tampa Bay Underground Film Festival