Posted in: Disc Reviews by Archive Authors on November 29th, 2017 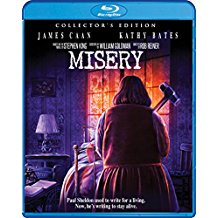 Of the many films based on books by prolific writer Stephen King, Misery ranks near the top. Falling somewhere between the horror and thriller genres, this film about a twisted obsession is frightening because the premise seems very real. Directed by Rob Reiner (A Few Good Men), who first visited King territory with his 1986 film Stand By Me, Misery tells the story of romance writer Paul Sheldon (James Caan, Elf) and the fan who rescues him after a car accident.

Paul wakes to find himself in the care of Annie Wilkes (Kathy Bates, About Schmidt), who’s obsessed with his “Misery” romance series. At first she seems caring, nursing him while he recovers from the accident, which left him with two broken legs and a dislocated shoulder. Soon, though, it becomes apparent that Annie is quite disturbed, and Paul realizes he’s in captivity. When his latest book in the Misery series comes out, Annie is outraged to discover that Paul, who wants to do more serious work, has ended the romance series and killed off the protagonist. She forces Paul to begin writing a new Misery book to fix things, and in his crippled state he has little choice – he’s at Annie’s mercy, until he can escape or be rescued. But is anyone out looking for him?

Kathy Bates, who won the best actress Oscar for this role, carries the film with the performance of her career. Juxtaposing caring servility on the outside with her inner rage and violent nature, Bates created a truly memorable villain who evokes fear and just a touch of sympathy. James Caan, though outshone by Bates, gives a convincing performance, and the interaction between the pair that makes up much of the film feels real, and unsettling.

The film accomplishes a lot, with many highly suspenseful scenes during the cat-and-mouse game between obsessed fan and crippled author. You’ll find yourself on the edge of your seat, willing Paul to make the right moves to escape, and cringing at the brutality lurking inside Annie Wilkes. That said, without Bates’ and Caan’s performances, the film would not have risen above your average thriller.

Misery is presented in its original aspect ratio of 1.85:1. The 1080p image is arrived at with an AVC/Mpeg-4 codec. This is a relatively new 4K restoration. It’s an ultra-realistic film that does tend to shine a bit more with the detail that only high definition can offer. The big difference here is in the textures. Clothing and surface areas take on a whole new dimension here. There’s not a lot of color. The film was purposely shot to be bleak to fit the mood and winter settings. Black levels are terrific here, and the entire production is heads and tails above anything released before.

The DTS-HD Master Audio 5.1 track is pretty solid for what it needs to do. There’s pretty much dialog and some musical cues. It all works just fine. Believe me when I tell you that you won’t be paying attention to how your sound system works while watching this film. It just plain doesn’t matter any more than what you get here.

There’s an Audio Commentary Track with Director Rob Reiner and another with screenwriter William Goldman.

All of the previous release extras are on board with two new features added for this Shout Factory Release. They are new interviews and not vintage pieces.

Interview With Rob Reiner: (37:04) Reiner talks mostly about himself here and has a hard time catching his breath or completing a sentence before he is off on a new one. He takes a lot of the credit here.

Interview With Special Make-Up F/X Artist Greg Nicotero: (26:12) This is the more informative of the two new interviews.

Misery rises about your average thriller thanks to the strength of Kathy Bates’ incredible performance and James Caan’s solid second fiddle.