The Defiant Ones (Blu-ray)

Posted in: Disc Reviews by Brent Lorentson on December 4th, 2017 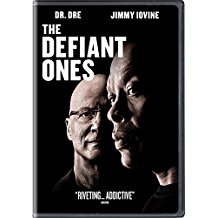 Coming along the heels of Straight Outta Compton, the new HBO documentary series The Defiant Ones takes a more in depth at the life and career of Dr. Dre as well as famed musical producer Jimmy Iovine.  The 4-part series comes out to over four hours of interviews and stock footage that spans over the course of both of their careers, and as a result we get a comprehensive look at the music industry like we’ve never seen before. Whether you are a fan of hip-hop or rock, there is something here for everyone, but for those who seem to have zero tolerance for rap, it’s the story about these two and where they came from to their joint venture in a 3.2 billion-dollar deal with Apple that transcends all taste in music. This is a rags-to-riches story about a Brooklyn boy and a kid straight out of Compton who had a passion to create music, and in the process they changed the industry forever.

Part 1 is our introduction to Jimmy Iovine and Dr. Dre, where we get their birth stories and how they were as kids. What stands out the most here is seeing how much this pulls back the curtain to the myth about gangster rappers, and we see how Dre was simply a kid with a passion for music and how he had a unique ear to create something different. As for Iovine, we see how he did all he could to not have to work the boat docks and went from creating a failed band to eventually getting a job working at a recording studio.  Personally, the highlights of this part were seeing old studio footage of Jimmy being an engineer for the Bruce Springsteen album “Born to Run” and how he got a song Springsteen decided not to use and Jimmy ends up giving it to Patti Smith to create the son “Because the Night”. Follow this by seeing old footage of Dr. Dre working with Easy E for the song “Boys N the Hood”, well, it is incredible that someone thought to bring a VHS camcorder to document these moments that would become part of music history.

Part 2 gets into the rise of NWA; a lot of this was covered in the Straight Outta Compton film, but here we get the non-Hollywood take on the story, and it turns out to be just as engaging. We get the story behind the death of Dr. Dre’s brother as well the tragic accident that ruined the career of NWA member The D.O.C.  It’s surprising how emotional this portion of the story can get, but this is far from a tearjerker segment. As for the portions that cover Jimmy Iovine, this was my favorite part of the entire series, since it covers his work with Tom Petty and Stevie Nicks.  As a longtime Tom Petty fan, seeing the interview with him for the documentary had more of an impact on me. The romance between Iovine and Nicks is one of those brief glimpses into the celebrity life that here doesn’t seem scandalous but instead intriguing as we see how Iovine stole a song from Petty to give to Stevie Nicks.  That song and the duet that resulted is one of the biggest hits of both performers careers “Stop Dragging my Heart Around”. Seeing the footage from then mixed with the current interviews as they discuss how this all went down is once again what makes this documentary something special and unique.

As part two of the series carries on, we see the continued fall of NWA and the trouble Dre eventually gets into after assaulting an MTV personality. With interviews with Ice-Cube as he talks about the animosity that developed between the group members we definitely can see that there is still some emotional baggage with all involved to a degree.

And if Jimmy Iovine wasn’t impressive enough with who he worked with, we get the story of him running down U2 and working with them on “Rattle and Hum”. As it would turn out U2 would be the band that would break Jerry from wanting to work in the studio.

Part 3 brings us into the 1990’s and the birth of Interscope Records and when Dr. Dre and Jimmy Iovine finally have their careers collide when Dre and Snoop go to Interscope with “The Chronic” album.  For those of us that were around in the 90’s you know about the giant transition from cassette tapes to CD, and we get a brief history lesson on that here, but it’s the story of Interscope Records and the many artists and careers that were spawned during this time that is incredible.  From Trent Reznor, to the rise of 2-Pac and the full-blown East Coast vs West Coast feud, Part 3 is filled with drama that easily could have been stretched another few hours. It’s these inside perspectives that give a personal take on these events and remind us that these are real people and not simply media headline characters.

Part 4 covers the reinvention of Dr. Dre and him setting up his company Aftermath. This is where we hear about the discovery of Eminem. This is also the time in the industry when Napster became not just a threat but a plague against the industry, and as we’ve seen Iovine and Dre have been constant innovators, we arrive to the point where they get into the headphone business.

The Defiant Ones serves to be more than just a story of two men and their rise to be rich and famous It is an engaging brief history lesson about the music industry.  Director Allen Hughes (Dead Presidents & From Hell) handles the massive amount of interviews and stock footage and delivers an in-depth and engaging story that manages to hold your interest despite the runtime. When I first got this to review, I had every intention on taking my time watching this, but instead I couldn’t turn it off and watched it all in one night.  It was exhausting but worth it. Runnin’ Down a Dream is for the most part my all-time favorite documentary, I’ve seen it numerous times, and it holds up. When I think about The Defiant Ones and its place in the long run, I can’t but feel it is simply required viewing for anyone who wants to get into the music industry or considers themselves more than just your typical fan of music. The story of these two men is inspiring, and it shows what can happen if you have the drive and talent mixed with a little bit of luck.

The Defiant Ones is presented in the aspect ratio 1.78:1.  The 1080p image is arrived at with an AVC MPEG-4 codec at an average of 31mbps.  When it comes to the interview portions, the setup shots are beautiful and crisp; each interview subject has their segment shot in different locations, whether it be in their homes or in a studio.  It’s the archival footage that is what suffers and shines the most.  Mix from what looks to be old VHS footage to 16mm and even 35mm is used throughout the film.  The old studio footage hasn’t held up well, but it’s still incredible to see these candid behind-the-scenes moments of classic songs being recorded. There is so much that can be done about the preservation of this kind of material, but in this kind of format it is easier to forgive.

The DTS HD-Master Audio 5.1 track is played with some in the first part of the series as they do a brief example of fading and mixing, but from this point on we get more of the standard interview quality.  When music videos are played and we are introduced to new subjects in the series there is more utilization of all the speakers, but for the most part this is all about the interviews.

It comes with a DVD copy of the series.

For many this may not seem like your typical Blu-ray to curl up and watch, but if you are looking for an engaging drama about underdogs overcoming adversity, this is a great story.  Whether you want to watch one part at a time or binge the whole series, it’s up to you how you want to experience it.  Personally, HBO and all involved knocked it out of the park with this series, and it’s easily in my top viewing experiences of the year.

Brent Lorentson is a horror writer and film critic based out of Tampa, Florida. With a BA in Digital Film, he co-wrote and co-directed Scavenger Hunt. His short stories have appeared in various horror anthologies. In 2019 his short script Fertile Blood will be a part of the anthology horror film Slumber Party. He is currently working on his first novel A Dark and Secret Place set to be released in late 2019. Favorite Films: Taxi Driver, Fight Club, I Saw the Devil, The Wild Bunch, Dawn of the Dead, A Clockwork Orange, Pulp Fiction, Heathers, The Monster Squad, and High Fidelity.
Tampa Bay Underground Film Festival Tuesday Round Up: December 5, 2017