Posted in: Disc Reviews by Brent Lorentson on December 7th, 2017 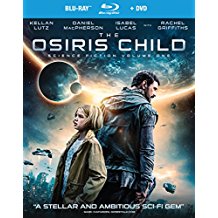 There is a sense of dread that unintentionally comes along with an independent science fiction film. Despite how far technology has come, it seems that for a science fiction film to really be impressive they need a reasonably decent VFX budget or suffer with a look that often times appears cartoonish by comparison of the larger-budget films. The Osiris Child somehow manages to not just create a grounded realistic futuristic world, but even manages to use practical effects to create some nasty-looking monsters and not pull its punches with the scope of its story. In a film that seems to be parts Elysium and parts Pitch Black; this might be the most ambitious effort I’ve seen in the genre that manages to succeed in many ways.

Kane (Daniel MacPherson) is an officer who works in a space station over a planet and discovers that the planet is about to be wiped out.  Unfortunately his daughter is visiting him from Earth, has travelled through space to visit him, and is staying at the planet her father is looking over. Kane goes against orders to rescue his daughter and get her to a bunker to protect her, but in the process his ship is shot down and he crash-lands miles away from where he needs to be. As luck would have it, Kane is rescued by a mysterious figure, Sy (Kellan Lutz) who happens to be an escaped prisoner who reluctantly helps Kane get him to the city where his daughter is supposed to be.

As the film is told out of order, each sequence is broken up in chapter form; it allows for co-writer and director Shane Abbess to tell his story in a unique way.  Sy’s backstory isn’t just simply a prison escape, which would be ambitious enough, but he injects the added bonus of a warden who is creating monsters in the prison. These monsters are big hulking creatures, and even better, these are played by men in giant monster suits. The textures and the movement of creatures is another facet that grounds this film and actually heightens the production value.

With the monsters, aka The Ragged, running amuck on the planet and time running out, the stakes are high in this fast paced sci-fi action film that simply impressed me.  Sure, we see a lot of familiar tropes with characters and plot points, but this is only a minor hiccup by the film. What is strange is that the film boasts the subtitle Science Fiction Volume One; this would obviously lead one to believe this is simply the starting tale of something bigger. The ending of the film has me curious and hopeful for the direction this film series could go.

If anything could be stripped away from the film, it should be the film’s narration by Kane’s daughter, Indi (Teagan Croft). While it serves as to remind us that the film is supposed to be her story and that there is a larger tale to be told, the daughter is missing from a large portion of the film and serves only as a plot device.  I’m bothered by this, because the time we do get to spend with her isn’t enough for me to say I’m on board with seeing another film with her in it. Films and stories all have story and character arcs, but we never see anything that I’d feel comfortable calling an arc with Indi. Sy and Kane are the true stars of this film, and by the film’s end I’m on board with seeing more from them and what else can be done with the characters.

Another bit of a drawback here is the film’s ending; it’s a bit clunky and seems to want to set up a sequel rather than give us a neat and tidy conclusion to the story. Because of this I feel I do need to strip half a disc away, because I just feel the conclusion wasn’t given the proper time needed considering how much of the film builds up to this moment in particular.

Between having a pair of likeable leads and smart filmmaking combined with an entertaining story, I come away from this feeling this deserves a cult following.  While it’s not quite as fun as Turbo Kid, The Osiris Child is the kind of pulpy fun that is missing from your typical science fiction films.

The Osiris Child is presented in the aspect ratio 2.66:1.  The 1080p image is arrived at with an AVC MPEG-4 codec at an average of 28 mbps.  Despite the low budget, when the film goes effects-free it looks really good, with detail that we can capture not just in the actors’ faces and costumes, but also on the retrofitted bus that we see the group travel aboard.  There are moments where the extra bits of detail that come along with being in 1080 cause a bit of an animated look to the CGI. Sure, it’s obviously green screen with CGI to achieve the dogfight in the early portion of the film, but this thankfully isn’t distracting. The director was smart to keep the focus on the characters, and using man-in-suit effects for the monsters goes a long way.

The DTS-HD Master Audio 5.1 track is another point in the film’s favor where it utilizes the audio track to give the film a grander feel.  From the dogfight in the beginning of the film where we do get a sense of the chaos happening to the street battles that occur later in the film, the audio sounds every bit as good as a bigger-budget film. The dialog is clean throughout the film.

Making The Osiris Child (28:49) Here is a 5-part documentary with a play-all button to select. This gives a mildly comprehensive look into the process of making the film with a nice mix of behind-the-scenes footage and interviews with the cast and crew.

Deleted Scenes: (5:25) Nothing major was lost or gained with these scenes, but it is fun giving it a look to see the scenes with incomplete effects. It helped me appreciate how far they came with their final vision.

Visual Effects: (7:15) Basically a long montage with before and after shots of sequences in the films with and without effects.

Music Video: A catchy song that plays in the film, not so much a music video where we see the band, but instead a montage of clips and behind-the-scenes footage.

While this isn’t so much an independent game-changer to the genre, those who are fans of sci-fi I feel will be able to appreciate this film.  This is a film that has put writer/director Shane Abbess on my radar. This is a guy to keep an eye on and expect some big things from down the road.  This is a fun little sci-fi adventure/monster film that delivers with its 99 minute runtime.

Brent Lorentson is a horror writer and film critic based out of Tampa, Florida. With a BA in Digital Film, he co-wrote and co-directed Scavenger Hunt. His short stories have appeared in various horror anthologies. In 2019 his short script Fertile Blood will be a part of the anthology horror film Slumber Party. He is currently working on his first novel A Dark and Secret Place set to be released in late 2019. Favorite Films: Taxi Driver, Fight Club, I Saw the Devil, The Wild Bunch, Dawn of the Dead, A Clockwork Orange, Pulp Fiction, Heathers, The Monster Squad, and High Fidelity.
Transformers (UHD Blu-ray) (4K) The Fall: Complete Collection (Blu-ray)