Posted in: Disc Reviews by Gino Sassani on December 8th, 2017 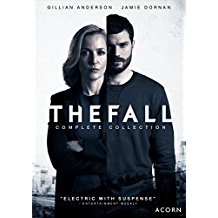 “Art is a lie. Art gives the chaos of the world an order that doesn’t exist.”

The X-Files will soon return for a second revival season with 10 episodes that will likely finish the franchise. But if you’re a Gillian Anderson fan, you won’t have to wait until next year to get your Anderson fix. Acorn has a release that you really have to discover. Gillian Anderson has served three seasons (or series, as the Brits call them) in Belfast for the BBC series The Fall. With the broadcast of that third and final season, Acorn is releasing a nice complete set of all three seasons on both DVD and Blu-ray. If you want to win a copy of the DVD set, you have to stay tuned here and be sure to check out our 12 Days of Christmas Giveaways. In the meantime, I’m going to tell you about the Blu-ray set that I’ve just had the pleasure to consume for review.

Gillian Anderson plays Stella Gibson. She’s an investigator from London who has been sent to Belfast to review a murder investigation. She expects a short stay. That all changes when another murder is revealed to have some connection to the one she is sent to review. When Gibson voices her theory, it is not exactly what the local or London brass wanted to happen. Before long she’s crying serial killer, and finally enough evidence emerges to prove her right. The next thing she knows is that she’s put in charge of the taskforce to catch the elusive killer.

Enter Jamie Dornan as Paul Spector/Peter Baldwin. He’s the hunted killer. Don’t worry, I didn’t just spoil the series for you. The show takes place from two very distinct perspectives. There is the point of view of Gibson, but we also go deeply into the life and activities of Spector. He’s a family man with a wife and two young children. He works as a grief counselor, a field he is very familiar with. His mother killed herself, and it’s left an emotional scar that is part of the reason he has become a killer.

These two perspectives create a rather nice and edgy contrast in the storytelling here. This is not a typical police procedural drama. We get deep inside of these characters’ darkest places. Gibson has a lot of emotional trouble herself. There’s an emptiness there that Anderson plays quite convincingly, not just during vulnerable moments, but through her motion and speech. She has a reservation about her that strongly contrasts with a need to be in charge and prove her ability in this “men’s club” of the police force. She intentionally chooses a green female patrol officer to be her assistant on the task force. Gibson also has a history of sleeping with her male colleagues. It’s a pattern that is repeated here, but it ends up not being the safest play for the men she ends up with in her bed. They are all either troubled or “broken” in some way, and for her it’s a rather cold act with no emotional involvement. When one ends up dead, she can’t even muster up much interest at all in the circumstances.

Spector’s perspective is the more interesting of the two. It’s not just because he’s the killer and the more exotic personality here. It’s got a lot to do with Jamie Dornan, who can change personalities at the drop of a hat. He’s good at his job. He goes above and beyond to help patients. He’s practically obsessed with an abused woman whom he helps to find the courage to leave her abusive husband. He’s also quite a devoted father, especially toward his 8-year-old daughter who adores him. But Spector has a secret life. He’s a serial killer.

The Fall takes you deeper into these dark acts than many might find comfortable. We witness his entire process as it relates to a victim named Sarah Kay (Donnelly). We watch as he picks her out and stalks her. His next phase is to break into her apartment and look about, stealing and sniffing underwear. Before he leaves, he arranges undies and a sex toy on the bed, because he wants the victim to know he’s been there. He likes being in the apartment while she’s there barely getting caught. Finally he slowly strangles his prey, letting up many times to prolong the experience. Afterward he washes the body and poses her on her bed, taking pictures and even video. As Gibson correctly surmises, he is creating his own porn that he will come back to and create elaborate dolls and sketches to relive the event. The murder, particularly of a later victim, is intense and graphic. Even those of us somewhat immune to this kind of drama might find it quite dark and disturbing.

The series was created by Allan Cubitt. He also wrote the episodes and directed all but five throughout the 3-year run. He absolutely has a distinct style that comes through the entire series. The show is often a slow burner in the extreme. Several episodes deal with almost exclusively conversations and interrogations. When it goes dark, it goes very dark, but with the same slow, methodic nature of everything else. The show relies heavily on the two leads. They both handle the burden well. It is unfortunate for the supporting cast. There are nice performances here, but one of the biggest flaws in Cubitt’s writing is that he throws out bits and pieces of story that he simply never resolves or often even returns to. There’s an officer shooting in the first season that begins like it’s going to be a huge arc but is rarely touched upon and only explained by exposition at the end of the series.

Another issue I have with Cubitt’s inability to stay on course is that there are missed opportunities throughout the run. At the end of the first season we get a glimpse of a wonderful cat and mouse exchange between the leads. I settled in to see more of that, and it really never developed. It’s there throughout, but only as fluff and never again dominates the show until the very last couple of episodes in Season 3. Cubitt has so many ideas that he jumps from one to another, abandoning the old great idea for the new “cooler” plan. It’s rather obvious and turns what should be a great show into a very good show.

There are some good supporting roles that do remain with us. Aisling Franciosi is brilliant as Katie Benedetto. Katie is the Spector family babysitter who as young as 15 is flirting with Paul. She gets quite brazen, but he’s able to resist. But when his activities comes to light, he happily tries to use a fictional affair with the teen to cover his murderous activities. Katie goes from flirting to becoming obsessed with Paul. The more she learns of his dark nature, the more under his power she becomes. It’s a diabolically wonderful evolution that Franciosi plays wonderfully. Bronagh Waugh is pretty solid as the wife who deals first with a possible pedophile husband and then the idea that he’s been killing women without her suspecting anything more than infidelity. Sarah Besttie is a young child, but she is absolutely incredible as Olivia, Paul’s daughter. This kid can act, and I hope we see her again very soon.

Each episode is presented in its original broadcast aspect ratio of 1.78:1. The 1080p image is arrived at with an AVC MPEG-4 codec. The show has that high frame-rate video quality that so many newer televisions try to sell us on. What is intended to be “ultra-realistic” might well be, but it’s not what Americans are used to. Fortunately, the cinematography is excellent and uses the natural locations of Belfast quite nicely. It’s also quite a moody show with cold colors most of the time. The police offices are almost monochromatic. This really isn’t a colorful presentation which fits the cold dark nature of the material. Black levels are fair, which is the best you can get with so much color correction. There’s enough detail that you can so easily be disturbed by what you see. Close-ups are where the real drama takes place and where the real acting is done.

The DTS-HD Master Audio 5.1 is intended to be aggressive. The strength of the show is how intimate we get with what is happening on screen. The audio presentation is intended to feel a little claustrophobic, certainly uneasy. The dialog cuts through just fine, which is important because Anderson is rather soft-spoken here. Let’s not talk about her rather uneven accent, which is not good at all. If anything it can make it hard to understand her at times. I’ve used subtitles to figure it out. But this is no fault of the audio presentation, but Anderson’s delivery.

Deleted Scenes: Two of the seasons have several.

Behind The Scenes: Each season has about a 10-minute look at that material with the usual cast and crew input.

It’s nice to catch these British productions from time to time. This one turned out to be unexpected in so many ways. I am still taken by how atmospheric and disturbing the show can be. It’s not often that we see this kind of darkness on television. The production values are very good, and Cubitt tells some fascinating stories here. The show would have benefited from Cubitt not wearing so many hats, however. He needed someone to keep him from abandoning so many threads. The finale left me a little unsatisfied, as so many finales seem to be doing of late. I also wasn’t ready to leave this story quite so quickly. Neither will you. “Tomorrow’s another day.”

Gino Sassani is a member of the Southeastern Film Critic's Association (SEFCA). He is a film and television critic based in Tampa, Florida. He's also the Senior Editor here at Upcomingdiscs. Gino started reviewing films in the early 1990's as a segment of his local television show Focus. He's an award-winning recording artist for Omega Records. Gino is currently working on his 8th album Merchants & Mercenaries. Gino took over Upcomingdiscs Dec 1, 2008. He works out of a home theater he calls The Reel World. Favorite films: The Godfather, The Godfather Part II, The Body Snatcher (Val Lewton film with Karloff and Lugosi, not the pod people film), Unforgiven, Gladiator, The Lion King, Jaws, Son Of Frankenstein, The Good, The Bad And The Ugly, and Monsters, Inc.
The Osiris Child (Blu-ray) Transformers: Dark Of The Moon (UHD Blu-ray) (4K)