Posted in: Disc Reviews by Jeremy Butler on January 2nd, 2018 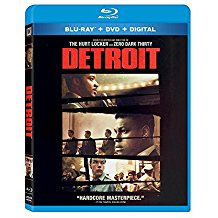 Detroit is a period crime drama focusing primarily on the Algiers Motel incident during the 12th Street riots in obviously, the city of Detroit. The night of July 25, law enforcement, including the local department, Michigan State Police, and Michigan Army National Guard responded to the hotel to investigate reports of a sniper. During the confrontation, three men were killed and another nine, including two white females, were allegedly beaten and humiliated by the first responders. A trial was held for three of the officers involved and a private security guard, with the deaths being declared justifiable homicide. To many, it is considered one of the biggest miscarriages of justice. Coming off her successful depiction of the manhunt for Osama Bin Laden (Zero Dark Thirty), Kathryn Bigelow reteams with writer Mark Boal to bring this story to life.

Granted, although I had heard about this incident during my history class, I will confess a significant ignorance regarding the specific details. With the knowledge that some liberties were taken in regard to how the circumstances came about, I have to classify this film as a real eye-opener. The events of that evening are told from the multiple perspectives of a cast of established actors and rising stars, which includes John Boyega (Star Wars: The Last Jedi), Anthony Mackie (Avengers), Will Poulter (Maze Runner), Algee Smith (Saints and Sinners), Jason Mitchell (Mudblood), John Krasinski, and Jack Reynor (Transformers: Age of Extinction).

The focal points of the story are Boyega as private security guard Melvin Dismukes, Poulter as corrupt patrolman Philip Krauss, and Smith as struggling music artist Larry Reed. Without question, Poulter is the most unlikeable of the trio, but even still there are moments where you see that he is just a man in over his head. Poulter is excellent at conveying the desperate and conniving nature of the character. Starting out, I was not a fan of Smith’s Larry Reed; he was clearly arrogant and entitled, but out of the entire cast, he is the one who undergoes the most character growth, especially after the tragedy that forever changed his life. Boyega’s character is the one I felt for the most. Like Poulter, he was in way over his head, but unlike the patrolman, he was a man who was truly attempting to do things the right way. He takes a bit of a stand against the abuse, but perhaps not as big a one as he should have, and he ends up paying for it.

The events unfold in a very authentic and realistic fashion. I had no reason to doubt that the actual circumstances occurred as depicted. Firsthand accounts and witness testimony were likely a big part of getting the story right. Overall, this was deeply personal story and very human. A truly engaging story; once you start watching, it will be difficult to tear your eyes away from the screen.

Detroit is presented in an aspect ratio of 1:85:1. The 1080p image is arrived at with an AVC MPEG-4 codec at an average of 28 mbps. Overall picture quality is average: a clear picture, but not overly crisp. Flesh tones are warm, but there is not an overabundance of detail.  A majority of the film takes place in the interior of the Algiers Motel, which is illuminated by artificial light. I would have loved to have seen better black level separation in the exterior night sequences. There is visible grain in the archival footage and pictures, but obviously that is to be expected.

The DTS-HD Master Audio 5.1 track was a bit overwhelming at first, specifically during the initial rioting scenes of the movie. The yelling, destruction of property, and ambient noise blend together well; however, the score does on occasion does overpower the action. The rear speakers contribute very little during the dialog sequences with a majority of the background noise originating from the front speakers. In regard to dialog, the track is more than up to the task as every word comes through crisply with no need to elevate the volume. Alternatively, there is a secondary narrative track that describes all the action occurring on the screen, which I imagine is for a visually-impaired audience.

The Cast of Detroit (02:07): A brief featurette that includes director Kathryn Bigelow and her motivation behind her casting choices as well as testimonies from the actual cast regarding their experience and camaraderie on set.

Algee Smith and Larry Reed ‘Grow’: Actor/Musician Algree Smith shares a duet with the real-life inspiration for his character in the film, Larry Reed. Definitely worth a listen or four.

Detroit Then and Now (01:32): A less-than-two-minute featurette addressing Detroit’s past and present with the real life inspirations for the cast.

The Hope of Detroit (01:14): Another brief featurette that would have served as a great trailer for the film.

The Invasion of Detroit (02:05): A featurette addressing the deployment of the Michigan Army National Guard complete with witness testimony.

The Truth of Detroit (02:06): A featurette with a pretty self-explanatory title. In this two-minute testimonial, Kathryn Bigelow talks about getting to the truth about the Algiers Motel incident.

History can sometimes be considered a dirty word, especially dark history. Naturally, we tend to pull away from things that don’t cast us in the best light or want to rewrite it so that we don’t look as bad. However, there are many who would argue the importance of remembering our history so that we can learn from it. After all, those who cannot remember the past are condemned to repeat it. For me, that is what Detroit was; a film that highlighted a part of our history that masses may not know much about. I know that I didn’t. Now I can say that I am better educated than I was before, and it only took 143 minutes to become that way. Who can’t spare 143 minutes?

Jeremy Butler is a film school graduate of the International Academy of Design and Technology. He is been writing for Upcomingdiscs since 2012; however, movies have played a big part of his life for much longer. Favorite genres include horror, science fiction/fantasy, and comedy. Favorite movies are V for Vendetta, Boondocks Saints, Kiss Kiss Bang Bang, and The Godfather.
12 Days Of Christmas Giveaways – Day 9: Spartacus: The Complete Series On Blu-ray Kingsman: The Golden Circle (UHD Blu-ray) (4K)