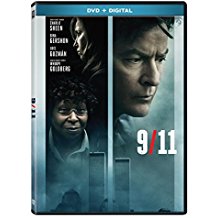 The sight of Charlie Sheen in an earnest 9/11-themed drama is, to say the least, surprising. The controversial, tiger-blooded star has obviously drawn his share of headlines in recent years for reasons that have nothing to do with his acting. So you may or may not have forgotten that Sheen was also one of the most famous 9/11 truthers. But the most surprising thing about the ill-conceived 9/11 is that Sheen — delivering his first dramatic performance in years — isn’t even the most tacky thing about this film.

“Baby, I think we’re under attack.”

As you might have guessed, 9/11 is set on the day of the most infamous terrorist attack on U.S. soil in American history. More specifically, the film focuses on the destruction at the World Trade Center in New York City. The movie begins by introducing us to a handful of disparate strangers who begin their day like any other.

A bicycle messenger named Michael (Wood Harris) wishes his little girl a “Happy Birthday” before heading off to work. An attractive but troubled young woman named Tina (Olga Fonda) steels herself before leaving her posh bedroom. Meanwhile, Metzie (Whoopi Goldberg) is an elevator dispatcher at the WTC who trades good-natured barbs at work with janitor custodial engineer Eddie (Luis Guzman). Finally, billionaire Jeffrey Cage (Sheen) is at the World Trade Center finalizing his divorce to wife Eve (Gina Gershon). Jeffrey, Eve, Eddie, Michael, and Tina all wind up in the same elevator when a passenger jet crashes into the North Tower. Metzie, in a room full of monitors as the chaos unfolds, is their only link to the outside world.

9/11 is based on a little-seen play called “Elevator,” which was written by Patrick James Carson and premiered in Tucson in 2011. I’ve never been to Tucson, so I can’t speak to the faithfulness of this movie to Carson’s play. What I can say is that the movie peaks about 15 minutes in, when it portrays a tragic sense of confusion and denial from the five isolated characters after their elevator suddenly comes to a halt. The way most of them try to remain calm and play it off as a routine malfunction is the first and only time 9/11 comes close to being subtle and truly impactful.

The fundamental problem with 9/11 is that it re-casts one of the most tragic days in American history as a melodramatic B-movie. (You’re not gonna believe this, but the couple who couldn’t wait to get divorced refuse to leave each other when the chips are down.) Director Martin Guigui has made a movie that is cheap in every sense of the word. (A quick, early scene of a greenscreened NYC sidewalk is laughable.) Even though it’s obviously a tough subject, I’m not saying that 9/11 should be off-limits as source material for stories…I just firmly believe this sensitive subject needs to be in the hands of vastly more competent filmmakers. (The less said about the movie’s climax — which features an “artistic” slo-mo shot of the characters floating inside the elevator as it drops — the better.)

9/11 doesn’t even come close to working as a tribute to the real-life victims who lost their lives in the World Trade Center that day because these characters are more cliched archetypes (jerky rich guy, vapid young woman, etc) than actual people. And, of course, the insulting cherry on this unfortunate sundae is the casting of Sheen in the lead role, which the filmmakers presumably did in a shameless bid to snag attention for their project. (It didn’t quite work.)

All that being said, Sheen — looking comfortable channeling his Wall Street heyday — still displays flashes of the charisma that made him a movie star over 30 years ago. (Same goes for Goldberg, by the way.) The problem is that even likable (Guzman) and magnetic (Harris) performers can’t salvage this sort of self-important slop.

When a filmmaker decides to make a movie about a real-life tragedy, he or she runs the risk of audiences and critics yelling, “Too soon!” In the case of 9/11, it’s not so much that a movie this clumsy and eye roll-worthy has been released “too soon” after the collapse of the World Trade Center…it’s that it never should have been made at all.

My Entire High School Sinking Into The Sea (Blu-ray) Tuesday Round Up: February 6, 2017