Posted in: Disc Reviews by Archive Authors on October 16th, 2012 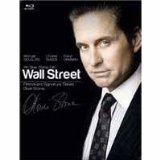 No other cinematic phrase described the 1980’s better. And no other movie captures the financial corruption of the 80’s better than Oliver Stone’s Wall Street. Bud Fox (Charlie Sheen) is a small-time stockbroker, making cold calls to businessmen who won’t give him the time of day. His father, Carl (Martin Sheen), is a hardworking airline mechanic for a fledgling airline and is worried about the path his son is headed down when big-time investment broker Gordon Gekko (Michael Douglas) takes Bud under his wing. At first, Bud loves the money, the women, and the power that Gekko gives him. But when Bud involves his father in one of his investment schemes, he sees Gekko for the greedy slimeball he really is, and starts to see the error of his previous ways.

As you probably know by now, Douglas propels Wall Street. His Academy Award winning performance of Gordon Gekko is the biggest reason to watch or re-watch Wall Street today. And there are even rumors that Douglas may reprise Gordon Gekko in a sequel that places him in modern-day New York. Very interesting…

That said, Wall Street is a relic. While it may have been hard-hitting in 1987, today it’s really just a window that gives us a look at the way things used to be. Greed, hair-grease, and shoulder pads. Wall Street is still entertaining, but a lot of times it’s for the wrong reasons. And today, when the skepticism of the general public is at an all-time high, I have a feeling many people will look back at Wall Street and say, “Yeah… Doh.”

Wall Street is presented in its original aspect ratio of 1.85:1. The 1080p image is arrived at with an AVC MPEG-4 codec at an average 30-35 mbps. The 1.85:1 anamorphic widescreen picture is sharp and clear, with some leftover grain here and there. But overall, it’s a solid transfer. No major complaints.

The DTS-HD Master Audio 5.1 is pretty basic. You’ve got dialog, and the Stewart Copeland score manages to break through quite nicely.

The Commentary with Director Oliver Stone is informative when Stone is not simply telling us what is happening on screen. He discusses his father, who was a stockbroker, and how he was the inspiration for the film, as well as jumping back into directing after winning an Oscar for Platoon. Given that Stone recorded the commentary for the re-release of the film, he has an excellent memory, explaining techniques behind different shots as well as how critics responded to the film’s somewhat abrupt ending.

Greed Is Good: (56:36) Recounts the impact that Wall Street had on audiences in the 80’s with modern-day interviews with the cast and crew. Real-life stockbrokers also discuss the accuracy of the film. The most interesting topic discussed is how women stockbrokers break into, and have success in, an industry largely dominated by men.

Money Never Sleeps – The Making Of Wall Street: (47:38) This featurette touches more upon the making of the film than the impact it had upon its release; a lot of the stuff covered here is simply rehashed material from the commentary track and Greed is Good documentary. Stone again discusses the inspiration behind Wall Street, his stockbroker father, and there are some more present-day interviews with the cast and crew.

Deleted Scenes: (22:38) There is an optional Oliver Stone commentary but no play-all.

Fox Legacy With Tom Rothman: (12:20) The Fox Network show looks at the film.

I understand Wall Street has a lot of fans. I’ve seen Boiler Room, where the characters recite the film word for word, and I don’t doubt that many fans of the movie do the same thing in real life. So I’m betting that a lot of people are looking forward to this Blu-ray re-release. While Wall Street is still an entertaining take on financial corruption and the “me first” attitude of the 1980’s, the film is severely dated. The only thing that holds up is Douglas’ performance. And while a Blu-ray re-release might give the impression that the film is accompanied by a slew of extras, they are surprisingly limited and redundant.

Suddenly Single “31 Nights Of Terror” After Dusk They Come