Posted in: Disc Reviews by Brent Lorentson on April 13th, 2018 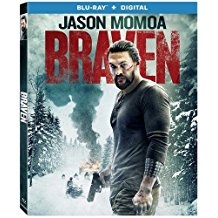 Lin Oeding has been involved with stunt work in film and TV for nearly two decades; it should come as no surprise that his first feature film would showcase some excellent stunt work throughout.  Before Braven, I knew Jason Momoa had done work on Game of Thrones and had his bit as Aquaman in Justice League, but I had never gotten the chance to see him genuinely flex those acting muscles of his till now.  I’m not about to say Momoa delivers a tour-de-force performance here, but it’s nice to see that he’s attempting to show a little range while beating up on the bad guys in the process. One would think the pairing of Oeding and Momoa would equal a surefire action hit, but instead we get an action film that unfortunately lacks any substance beyond some of its unique kills.

Joe Braven (Momoa) is a logger but is also a family man who seems to go days at a time without seeing his wife or daughter, so their time together you’d think would be more precious.  Momoa does a good job at playing the loyal husband and loving dad, but the relationship that the film focuses on most is between Joe and his father, Linden (Stephen Lang) whose mental health is deteriorating. After Linden gets into a bar fight that has him leaving the hospital in stitches and a warning from the police that next time Linden will be serving some jail time, Joe decides it’s time to have some one-on-one time to decide what he needs to do about his father. The problem is, rather than use this as a springboard to move the plot along and give us a chance to see this father-and-son relationship play out, it’s clear the film only used this as a device to get the characters from point A to point B.

As luck would have it, Joe’s cabin has been used as a place to stash a lot of drugs after one of his logging buddies wrecked his truck while on a drug run.  The drug runners basically take the drug boss out to the cabin to collect the drugs, when unfortunately they see Joe has already gotten to the cabin.  In what I can only call movie logic, the bad guys decide to make some terrible decisions on how to go about retrieving the drugs. Seriously, there are about a dozen other obvious directions anyone else would go, but this is an action movie, and mindless violence is to be expected, and that is what is delivered.  To add to the drama, it is discovered Joe’s daughter stowed herself away to come along with her dad and grandfather, and, well, Joe has to do what he can to keep her safe.

Instead of using the cabin as a line of defense for the standoff ala Assault on Precinct 13 or The OK Corral, the film delivers a way to get Joe out of the cabin and into the snowy wilderness.  What’s never quite explained is how Joe is skilled enough to be this one-man killing machine or how his father is a skilled marksman.  Some of this would have been nice to know, since after all we’re supposed to believe Linden should be in a home. Going a little further, we find out that Joe’s wife is also skilled with a bow and arrow (though to be fair, this is at least alluded to when she talks about having a student earlier in the film).

The film plays out just about how you would expect with plenty of fun stunt work between guys being set on fire, fighting along cliffs and jumping out of trees. Basically, the film delivers on the action front.  The biggest takeaway I got from the film is that Momoa has the charisma and the brawn to be a leading man in action films; he just needs that breakout role that unfortunately The Rock manages to be keeping all to himself.

Braven is presented in the aspect ratio 2.35:1.  The 1080p image is arrived at with an AVC MPEG-4 codec at an average of 29 mbps.  Despite having the beautiful backdrops with the snow and wilderness, the cinematography is unfortunately more focused on its characters.  There is a surprising lack of atmosphere and wasted use of the scenery.  The few night shots we get look good, and we get a decent amount of detail, but nothing that is overly impressive.  This is a film that could have used a little grain to just reflect the 80’s-90’s action film vibe the film has going for it.  While there were no compression issues, there is a moment in the film where the fire in the cabin seemed a little off in the coloring, but it was nothing too distracting.

The DTS HD-Master Audio 5.1 track is mostly what you would expect from this level of an action film.  We get some use of the surround when it comes to the impacts of the punches during the fight scenes and some of the shootouts.  What’s missing, though, is that they didn’t attempt to play with space and the ambience of the woods where the sound should travel a bit differently.  While the dialog was clear, the only major complaint I had with the audio was the choice for the score, but that’s just my personal taste and didn’t affect the overall film.

The Braven’s Views: (10:16) This is a pretty standard bonus feature with a mix of interviews with the cast and some behind-the-scenes footage cut in. Nothing all that impressive.

For those who are just looking for a fun action film to enjoy for 90 minutes, this fits the bill.  While it’s nothing great or memorable, this does show us that Jason Momoa is quickly becoming a rising star in the action genre.

Brent Lorentson is a horror writer and film critic based out of Tampa, Florida. With a BA in Digital Film, he co-wrote and co-directed Scavenger Hunt. His short stories have appeared in various horror anthologies. In 2019 his short script Fertile Blood will be a part of the anthology horror film Slumber Party. He is currently working on his first novel A Dark and Secret Place set to be released in late 2019. Favorite Films: Taxi Driver, Fight Club, I Saw the Devil, The Wild Bunch, Dawn of the Dead, A Clockwork Orange, Pulp Fiction, Heathers, The Monster Squad, and High Fidelity.
The Greatest Showman (UHD Blu-ray) (4K) The Americans: The Complete Fifth Season