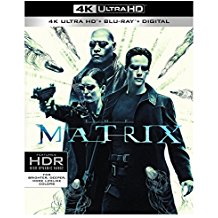 The Matrix (1999) was a landmark film in the Sci-Fi genre. While its box office intake was dwarfed by Episode 1, it was The Matrix that had people talking. Andy and Larry Wachowski’s story of a post-apocalyptic world where humans serve as biological generators of energy for the machines that rule the planet challenged people’s perceptions of what reality was. Computer hacker extraordinaire Neo (Reeves) has this gut feeling that life isn’t all that it seems to be. Turns out he’s right in a big way. A group of revolutionaries led by the thought-to-be-mythical Morpheus (Fishburne) open his eyes to the Matrix.

The Matrix, it turns out, is nothing more than an elaborate computer-generated reality intended to mollify humanity who are in reality nothing more than sheep, or in this case a renewable energy source, to feed the machines that have inherited the Earth. Morpheus believes Neo is “The One”, a prophesized savior who can bend the Matrix to his own will who will eventually lead humanity out of slavery. What follows is enough eye candy to give an army of Swiss chocolate factory workers diabetes.

In addition to the well-crafted story, The Matrix was well known for the creation of one of the most copied f/x currently in movie production: “bullet time” blew audiences away. The normally wooden acting of Keanu Reaves seemed to fit Neo’s transformation well, and the performances by the supporting cast (Laurence Fishburne and Carrie-Ann Moss) were visceral in their appeal. The Matrix was a box office success – the production budget was $63 million, and the domestic gross was $171 million.

People were enticed by the story and the philosophical underpinnings that went along with it. The public wanted to know how well Neo could adapt to his new powers and use them to free humanity. Any good performer after a solid performance will tell you that you always want the audience to leave wanting more. I wish the Wachowskis would have listened to that advice.

“Sequelitis” struck big-time, and actually, in my humble opinion, detracted from the first Matrix, which is almost universally accepted as one of the best movies that the genre had to offer. In 2003 Warner Bros. released both sequels to The Matrix, The Matrix Reloaded and The Matrix Revolutions in an attempt to cash in on the hype and cult following that the original had created.

The Matrix is presented in an aspect ratio of 2.40:1. The ultra-high-definition 2160p  image is arrived at by an HEVC codec with an average bitrate of 55 mbps. That’s a pretty reliable average, but it does tend to jump around a lot throughout. In the original version, the scenes within the Matrix were filtered through green light, whereas the scenes that occurred in the ‘real world’ were filtered with a blue light. The new transfer really brings this subtle coloring change into full effect. It’s what HDR does best. The new transfer overall is much brighter and has a greater depth of detail. I’ll admit that the f/x appear a little dated in the sewers with the ship with this kind of resolution. On the other hand, the bullet time and suspended body camera rotation f/x still hold up very well. Black levels are pretty fine. Speaking of fine black levels, you need to check out Trinity’s costume in 4K.

The Dolby Atmos presentation defaults to an exhilarating 7.1 track. Be careful here. For some odd reason, the audio will default to a DTS-HD MA 5.1 track that is rather inferior to the Atmos 7.1 version. Your home theater will be put through a full workout with a wide dynamic range of sound, major use of the sub-woofer, and excellent use of the surround speakers. Somehow despite all of the ambient sound, the actors’ voices were greatly enhanced and brought forward such that they are clearer than ever before. A great-sounding set just got better.

The extras are all on the Blu-ray copy of the film and an additional Blu-ray disc.

These are all the same features from the Blu-ray release from years ago. This includes the rather awkward menus. This includes all four of the Audio Commentaries, which can also be heard on the 4K disc.

Let’s be honest. There’s never been a film like this and probably never will be. I include the coming sequels here. What doesn’t it have? You’ve got kung-fu, hot babes, stellar f/x, and inspired story, super heroes and evil villains, and good actors. (OK, let’s not talk about Reeves.) So put in the disc, press a few buttons, and “Welcome to the real world.”

Gino Sassani is a member of the Southeastern Film Critic's Association (SEFCA). He is a film and television critic based in Tampa, Florida. He's also the Senior Editor here at Upcomingdiscs. Gino started reviewing films in the early 1990's as a segment of his local television show Focus. He's an award-winning recording artist for Omega Records. Gino is currently working on his 8th album Merchants & Mercenaries. Gino took over Upcomingdiscs Dec 1, 2008. He works out of a home theater he calls The Reel World. Favorite films: The Godfather, The Godfather Part II, The Body Snatcher (Val Lewton film with Karloff and Lugosi, not the pod people film), Unforgiven, Gladiator, The Lion King, Jaws, Son Of Frankenstein, The Good, The Bad And The Ugly, and Monsters, Inc.
Game Night (Blu-ray) Tuesday Round Up: May 22nd 2018