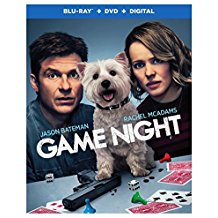 Everybody loves playing games. OK, most people like playing games. Friends have been getting together for game nights since there have been games. From the couples’ bridge days of the 1950’s to poker night with the guys, most of us have gotten together to play some kind of a game with friends. The thing about games is that they’re frivolous. Playing games with some buddies is a good excuse to kill a few hours, maybe have a few drinks. You’re not solving the world’s problems, and it’s usually just a simple night of entertainment. The same can be said for New Line Cinema’s Game Night starring Jason Bateman, Rachel McAdams, and Kyle Chandler. It’s not an important film, and it isn’t going to go down in the books as a timeless classic. It’s a chance to get together with a few of our own friends and spend about 100 minutes or so having a few laughs and taking a break from all of those problems we’re not solving. It wouldn’t hurt to pick up an extra-large tub of popcorn. Yeah, it’ll kill you, but then you won’t have so many of those problems, right?

Max (Bateman) and Annie (McAdams) are having a few friends over for a game night. It’s a tradition among the tight group where they play any number of games, usually as couples. Tonight they are trying to avoid letting neighbor Gary (Plemons) know about the gathering. He’s divorced from one of their friends, and they don’t really like him that much. That means having their guests park down the street and climb through their windows rather than come through the front door. It also involves some quick lies like explaining to Gary why they bought three bags of Scoops. My wife loves the 2-for- sales, but so far she hasn’t brought home any 3-for-1 deals. Gary’s a little creepy and more than a little scary. Their cover gets blown when Max’s rich brother Brooks (Chandler) crashes the party with a flashy car and a loud entrance. He wants to prove to the group that he’s a good guy and invites them to his house for the next game night and promises an ultimate experience. He goes through a lot of trouble and expense to hire a murder mystery company to stage a game with the prize being Max’s flashy new sports car. Of course, you know what’s going to happen from here. Through a series of coincidences the game ends up real, and someone is bringing the hurt.

The film actually moves at a pretty quick pace and offers more than a few clever twists. You’ll see some of them coming. Some of them are just too obvious, but I don’t think you’ll see all of them coming. The film was written by Mark Perez and directed by a committee of John Francis and Jonathan Goldstein, the man behind Bateman’s previous film Horrible Bosses. With this cast and crew, I was expecting a rather raunchy comedy in the way of Horrible Bosses, but I was very pleasantly surprised that this one doesn’t rely on cheap sex and toilet humor. It’s a smart romp that allows us to kind of play along. On top of that, it’s actually very funny. It’s also a film where the trailer doesn’t do it justice. Someone here decided that they should play into those raunchy expectations, and it’s a serious disservice to what we actually get.

The cast is strong. It’s no surprise that Bateman and McAdams have strong chemistry. This isn’t their first film together. There are a lot of folks here who have worked together before. It pays off with a smooth film that has a comfortable feeling from the beginning. It’s that comfort zone and the misdirected expectations that allow this one to come from nowhere and take you by surprise. Kyle Chandler gets to shake his squeaky-clean Coach Taylor image from six incredible years on Friday Night Lights. His Brooks character is wonderfully shady and in-your-face obnoxious. He has more than a few skeletons in his closet that are revealed throughout the film. He also gets to work with a former cast-mate in Jesse Plemons, Landry from Friday Night Lights, who is also a bit of a wild card character here. Michael C. Hall and Danny Huston also deliver small but powerful roles as villains in the film. They are pretty small parts, but both make them memorable. They add just the right sudden turn just when you settle into one plot device or another. Malcolm X. Hughes provides one of the best but brief moments as a character who literally is not who you think he is. You’ll understand when you see it.

Game Night is presented in its original aspect ratio of 2.40:1. The 1080p image is arrived at with an AVC MPEG-4 codec at an average 30-35 mbps. This is the kind of film that almost looks too clean. It’s sharp and glossy, which lends a bit of unreality to the whole affair. The nice establishing shots that make the streets of this world look like game setups benefits most from this clean and shiny look. The effect is enhanced by it, and the “gag” worked better here than I remembered from the theatrical screening. Black levels are pretty nice and allow the many exterior evening scenes to continue the same level of detail. But there’s not a lot of texture here at all. The plane scene at times actually looks pretty bad. I don’t know why, but there are moments that look like old videotape here.

The DTS-HD Master Audio 5.1 is going to be rather tame. Yes, there are some pretty active action scenes, but they don’t spice up the surround in quite the way you might expect. There’s always a little ear candy, but nothing really reaches out and immerses you in the experience. Subs are quite underperforming until the final plane scene where they suddenly come alive as if from out of nowhere. Did someone forget the bass fader until the end of the film? Dialog comes through, and that’s what the audio presentation is truly here to serve.

An Unforgettable Evening – Making Game Night: (3:48) Too short to be very informative, this is really just some cuts of the cast talking about how much fun they had.

Gag Reel: (6:48) There’s really a bit of an issue when the gag reel is twice as long as the total making-of stuff.

Gino Sassani is a member of the Southeastern Film Critic's Association (SEFCA). He is a film and television critic based in Tampa, Florida. He's also the Senior Editor here at Upcomingdiscs. Gino started reviewing films in the early 1990's as a segment of his local television show Focus. He's an award-winning recording artist for Omega Records. Gino is currently working on his 8th album Merchants & Mercenaries. Gino took over Upcomingdiscs Dec 1, 2008. He works out of a home theater he calls The Reel World. Favorite films: The Godfather, The Godfather Part II, The Body Snatcher (Val Lewton film with Karloff and Lugosi, not the pod people film), Unforgiven, Gladiator, The Lion King, Jaws, Son Of Frankenstein, The Good, The Bad And The Ugly, and Monsters, Inc.
The 15:17 To Paris (Blu-ray) The Matrix (UHD Blu-ray) (4K)