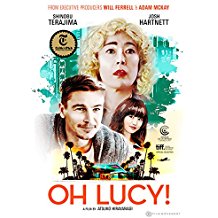 “Americans are loud, aren’t they?”

Oh Lucy! earns the exclamation point in its title within the first two minutes. The movie opens with a shocking leap that is meant to jolt the audience, but barely causes our disaffected heroine to raise an eyebrow. It’s played off as a throwaway moment, but it establishes the fact that this quirky Japanese/American dramedy with oodles of personality probably isn’t going to go where you expect.

“I want you to take an English class for me.”

Setsuko Kawashima (Shinobu Terajima) is a hopelessly bored office drone drifting through her life. When her vivacious niece Mika (Shiori Kutsuna) suddenly offers her the chance to take unorthodox English lessons, it doesn’t really seem that strange since Setsuko doesn’t have much else going on in her life. The class is located in a questionable part of town and is led by John (Josh Hartnett), who is prone to hugging his students and giving them American names. As a result, Setsuko is dubbed “Lucy” and told to wear a bright curly wig in class. Setsuko is confused but also intrigued by this likable stranger who got her to loosen up in about five minutes. The feeling, however, doesn’t last long: upon arriving at her second lesson, “Lucy” finds that John has quit and moved back to America.

If that isn’t bad enough, Setsuko also learns that John and Mika are in a relationship and that her niece has followed John back to the U.S. Mika’s mom/Setsuko’s sister Ayako (Kaho Minami) decides to go to Los Angeles to find her daughter, and Setsuko tags along in hopes of finding John. What follows is a series of darkly comic revelations, betrayals and misadventures.

Oh Lucy! is the feature directorial debut of Atsuko Hirayanagi, who expanded her own 2014 short film of the same name. The movie captures and displays an aspect of Japanese society that North American audiences don’t often get to see: normal every day life in a modern, city setting. I realize this doesn’t sound anywhere near as thrilling as another samurai story or martial arts flick. But while we might know rationally that life in Japan — which always seems so exotic — can be just as mundane and soul-sucking as life in a big Western city, watching that play out on screen is still subtly effective. It also makes for a cool inversion: when Setsuko and Ayako arrive in Southern California, things like gas station pumps and public mailboxes seem strange and alien.

While the story veers in unpredictable directions, the shifts don’t always work. I don’t want to get into specifics because the movie’s twists and turns are best experienced with a fresh eye, but the quirky, energetic John that Setsuko meets in Japan and the more low-energy version she encounters in California seem like two totally different people. I get that Hirayanagi wants to make a point about the ways we shift our behavior depending on where we are and who’s around us, but John’s wildly different dispositions were still jarring. That being said, casting a known performer like Hartnett — who’s had several brushes with movie stardom — in this offbeat indie was a smart move: John is a soulful scumbag with a glint in his eye, so you can understand why women repeatedly get sucked into his orbit.

On top of the unorthodox chemistry between “Lucy” and John, there is great stuff here between Setsuko and her estranged sister. Terajima and Minami have a great, prickly rapport as Setsuko and Ayako poke, prod, and tease each other. (We find out the root of their rivalry during the long flight from Japan to the U.S.) Meanwhile, Kutsuna is so likable and bubbly that you barely notice how much Mika is manipulating her aunt. And I haven’t even mentioned Takeshi Komori’s funny, warm-hearted work as “Tom” a fellow, wig-wearing student from John’s class that Setsuko meets and connects with.

Of course, the movie absolutely belongs to Terajima, who I’d never seen before but gives an absolutely daring and luminous performance. The actress is totally recognizable as a lonely, aimless adult, but she stops well short of playing Setsuko as pathetic. (Even though Setsuko ultimately does a series of increasingly pathetic things.) In other words, the actress always feels real, which is quite an achievement given the outrageous stuff that happens in Oh Lucy!

Oh Lucy! is presented in an aspect ratio of 1.85:1.The 1080p image is arrived at with an AVC MPEG-4 codec at an average of 38 mbps. Visually speaking, Oh Lucy! can be seen as a tale of two movies. Much of the first half in Japan is as subtly desaturated and smoky as Lucy’s colorless existence. Not surprisingly, flesh tones become noticeably warmer once the action moves to Southern California. This visual presentation — much like the movie itself — also features surprisng pops of colors, most notably in the dodgy, neon-infused building where John’s class in Japan is located. While it’s not the most outwardly dazzing or razor sharp image you’ll ever see, this is overall an impressive and varied presentation.

The DTS-HD Master Audio 5.1 track is as surprisingly potent as its visual counterpart on this disc. The track makes a strong first impression during the opening scene, which features the loud and chaotic arrival of a train: you can first hear it coming from a side speaker before it explodes to the front with strong sub support. Rear speaker activity on the whole is consistent and very effective, whether it’s giving us ambient noises from the busy city where Lucy lives or the crashing waves near a California beach. The movie is mostly in Japanese with English subtitles, but features plenty of conversation in English. No matter what language is being spoken, the dialogue is extremely well balanced with the track’s other elements.

NYAFF Chat — Interview with director Atsuko Hirayanagi: (18:06) The filmmaker discusses the genesis of the project during the 2017 New York Asian Film Festical (NYAFF). Oh Lucy! began as a short film that screened at Sundance and caught the attention of Will Ferrell and Adam McKay, who executive produced the feature-length version. (The director also talks about taking the film to Cannes.) Additionally, Hirayanagi examines the story’s themes, particularly the way people take on different identities to mask their true selves.

Deleted Scenes: (2:40) There are only two scenes, one of which takes place towards the very end and will remain unspoiled. The other (and more amusing) scene gives Megan Mullally’s friendly American traveler a little more screen time and features one of the movie’s awkward American hugs.

I’d never heard of Hirayanagi before popping in Lucy, but I’m already curious to see what the filmmaker comes up with next. This is a strange, unpredictable, and affecting movie. Obviously, that means Oh Lucy! isn’t for everyone, but it’s worth a look if you’re looking for a different kind of trip to Japan.