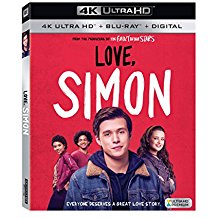 Despite falling into the “coming of age genre”, Love, Simon is actually so much more than your typical mainstream teenage film.  In the 80’s John Hughes ruled the box office  with his films, everything from Sixteen Candles, Weird Science, Pretty in Pink and of course The Breakfast Club were the films that spoke to the kids of the era.  It’s been a while since a film has come along that has fit into the genre that has managed to handle the awkwardness of being a teenager while also toeing the line of being heartfelt and humorous. Over the years there have been attempts to capture the essence of the 80’s John Hughes films, but these seem to always fail by either going to raunchy or attempting to make the lead characters cool and popular. It seems director Greg Berlanti has figured out how to bottle the magic of a John Hughes film and deliver a story Hughes never got to tell, a story about a teen dealing with the struggle of being gay and keeping it a secret from everyone around him.  The film is based off the young adult novel Simon vs. the Homo Sapiens Agenda, and the result is an unexpected and refreshing tale that has me wonder why it’s taken so long for a LGBT film to hit the mainstream.

When we meet Simon (Nick Robinson), he is introduced to us through narration as he navigates us through his normal life, normal with the exception of the secret he’s hiding from his friends and family about being gay.  We can easily sympathize with his character; after all, he’s simply keeping his secret because he loves his life and friends and is concerned that him coming out could cause things to change.  He sees how the one openly gay kid at his school is treated, and it’s enough to convince him that perhaps waiting to come out till he’s about to go to college would be the easiest thing.  His parents, played by Josh Dummel and Jennifer Garner, are the supportive type, and then he has his friends Leah (Katherine Langford), Nick (Jorge Lendeborg Jr.) and Abby (Alexandra Shipp) who are part of his tight group as well.  There is a good chemistry with everyone involved, and it helps getting to see them as a tight-knit group before Simon’s life takes a dramatic twist.

On the school message board one of the students comes out as being gay, and Simon takes this as an opportunity to share his secret finally. This in turn develops into an email relationship with a mysterious figure we know only as “Blue”. Here the story shifts as Simon becomes consumed with wanting to find out the identity of his pen pal, and as their interactions continue, he develops feelings for this person.  With this material it was enough to be entertaining, but what takes this film to another level is when one of Simon’s classmates stumbles upon these emails and attempts to blackmail him, which results in Simon having to maliciously deceive his friends in order to protect his secret.

Again I enjoyed how this was a refreshing take on the teenage romance while still giving us some familiar story tropes.  Sure, Simon is the main character, and yes, this is mostly about his struggle to protect his secret, but when you look closer you see how each of the teenagers has a secret of their own they are trying to protect.  The awkwardness of teenage love is on full display. This isn’t a story about kids wanting to hook up, but instead about those feelings for a close friend and being afraid that opening up will change the friendship dynamic.  One of my favorite moments is between Simon and Leah and their interaction after a Halloween party.  The writers could have taken the easy route and made this the moment where either the two kiss or Simon comes out to her, but instead we get this awkward moment that felt so genuine that I’d say it was the scene that had me hooked and curious how this would unfold.

Considering this is one of the first mainstream films that featured a gay character as the main character, it seems that this will be a trend that will only continue from here on, and it’s surprising it’s taken so long.  With its fun pop soundtrack and humorous tone, Love, Simon handles subject matter that would have been taboo before, but I can see its value to teenagers who may be struggling with their feelings about their sexuality.  This isn’t a film that beats its message over your head but instead presents it in a straightforward yet humorous manner.

Love, Simon  is presented in an aspect ratio of 2.39:1. The ultra-high-definition 2160p  image is arrived at by an HEVC codec with an average bitrate of 65 mbps. This ultra-high-definition image presentation won’t blow you away with vibrant colors. The palette appears to utilize a lot of red tint that looks rather warm here. The only real splash of color comes when Simon is having a fantasy of college life. There’s a dance routine with bright colorful clothes, and much of the film’s haze has been lifted. Likely there’s some kind of symbolism in that. Still there is somewhat of a haze effect in use, so you won’t get a lot of texture in the detail most of the time. The sharpness shows itself best in close-ups of characters. All of this is part of the film’s style and not a problem with the presentation. Black levels are somewhat average with enough shadow definition to keep the image from getting muddy. But the soft focus and desaturated colors are really part of the film’s style.

The DTS HD-MA 5.1 track shines the most in the musical references throughout. The party scenes and other source music tracks make the most of a relatively tame audio presentation. Dialog is really what’s being supported here, and you’ll have no issues with that. Surrounds are not aggressive and not particularly immersive. About the best you can say here is that it’s clean and clear.

Commentary with Director Greg Berlanti, Producer Isaac Klausner and Co-screenwriter Isaac Aptaker: This is a commentary where it’s obvious these guys really cared about the film they made and had a good time working on it as well.  There is a lot of information on this track that covers the adaptation of the book as well as the casting and filming.  For those who are fans of the film, this is a good commentary that definitely adds to the experience of the film.

Deleted Scenes (7:48) There are only two scenes here. One is mostly a throwaway scene with Abby, but the second scene is with Nick and involves him taking Simon out to a gay bar. Really wish this scene stayed in the film, but I understand how it would have changed the tone of act three.

The Adaptation (10:41) Mostly this is a collection of interviews with the cast and crew discussing their thoughts on the book.  The author is also interviewed, and she gives her thoughts on how the film compared to the book.

The Squad (9:46) A collection of interviews with the cast as they talk about working with one another.

#First Love Story Contest Winner (1:34) a short film that won a contest that was held by the filmmakers of Love, Simon.

Dear Georgia (5:07) The cast and crew discuss how they enjoyed filming in Georgia and the value of filming in the same area that the book took place in.

Dear Atlanta (2:06) Really this is just an extension of the previous bonus feature but with them just being more specific about filming in and around Atlanta.

Sadly this is a film that will simply get rejected by many because of its subject matter, and that’s a shame.  I’m not about to say this is an important film, but for many teenagers I can see the value this film will have for them.  I can see this film playing well with families who have loved ones in the LGBT community, but hopefully this will find a wider audience, because the message is bigger than how someone identifies their sexuality.

Brent Lorentson is a horror writer and film critic based out of Tampa, Florida. With a BA in Digital Film, he co-wrote and co-directed Scavenger Hunt. His short stories have appeared in various horror anthologies. In 2019 his short script Fertile Blood will be a part of the anthology horror film Slumber Party. He is currently working on his first novel A Dark and Secret Place set to be released in late 2019. Favorite Films: Taxi Driver, Fight Club, I Saw the Devil, The Wild Bunch, Dawn of the Dead, A Clockwork Orange, Pulp Fiction, Heathers, The Monster Squad, and High Fidelity.
The Great Silence (Blu-ray) Tuesday Round Up: June 19, 2018