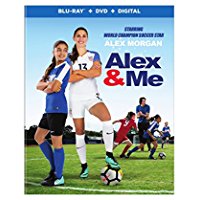 “If you believe in a goal or dream before it happens, is that real?”

There aren’t a lot of inspirational tales out there for young women who aspire to be athletes. At least not that I have seen. That is why I am sure that Alex and Me is bound to make an impact. This is tale for every girl who aspires for greatness. As a father to an amazing little girl, this really hit home for me. Unfortunately, not so much with my daughter, who is a bit too young to grasp the importance of the message this film is conveying, but I fully intend to keep this movie on hand for when she is old enough to understand.

Reagan Willis is young girl who loves soccer and idolizes Alex Morgan, U.S. gold-medal soccer player. Reagan has also grown up in the shadow of her older brother, the MVP for his high school football team who is currently being scouted by colleges. Getting her brother scouted has become their father’s all-consuming pursuit, which has inadvertently led to him prioritizing Logan over Reagan.

Reagan tries out for the top soccer club in the state but fails to impress the cold-blooded and arrogant coach, as well as catching the ire of the team’s star player, whose position she attempts to take. With an opportunity to play lost, Reagan begins to tear down all the Alex Morgan memorabilia around her room in a frenzy, which leads to her bumping her head, and when she comes to, she finds that Alex Morgan has emerged from the life-size poster on her wall.

To her credit, when she sees her idol standing her bedroom, Reagan immediately chalks it up to a hallucination from her bump to the head. Though she ignores her at first, eventually she begins to listen to the hallucination (Alex Morgan), who provides her with helpful tips on how to improve her soccer ability as well as the importance of commitment and practice. Eventually, Reagan hears of a team that is looking for a player. Arriving at the tryout, she quickly learns that her new team is anything but contenders, but when her idols help, she soon inspires them as well as herself.

Who knew that bumping your head could lead to such motivation? I’m halfway to take a header off a chair myself. Somehow, I doubt I will be as lucky as the films protagonist. As mentioned earlier, this was an important story that needed to be told. Granted there have been many Cinderella sports stories over the years, but those are normally told with male characters. It is nice to see the opposite gender get a film that acknowledges their goals and dreams. I dare say that this is a film for anyone who feels overshadowed by a sibling. Alex and Me will teach them that they don’t have to accept it, they just have to work hard and find their own thing to be great at.

Now, I warn you that the acting is not top-shelf, with the cast being made up of fresh faces, with the exception of Jerry Trainor; you remember him, the big brother on iCarly. Though it is nice that he found work follow the television series, I could have done without his attempt at a British accent; however, that bad accent becomes significant later in the movie. Despite the acting not be the biggest draw, it was a good launching point for our lead, Siena Agudong, who I found to be very endearing as Reagan. Ever kid needs a good example to follow, and she serves a great one in this movie.

Alex and Me is presented in an aspect ratio of 1.78:1. The 1080p image is arrived at with an AVC MPEG-4 codec at an average of 18 mbps. Picture was average. There were no vibrant colors that made it stand out; however, given the premise of the story, I was not actually looking for something extravagant. I did notice slight video grain on a green leafy bush that Regan passed on her way to her tryout at the beginning of the film. Other than that, there were no other outliers that I noticed.

My expectation for the film in regards to audio was minimal, but I must say that the DTS-HD Master Audio 7.1 track accomplished the job nicely. I’m not sure if I was just caught up in the moment, but there were a couple times during the action that with the well-mixed soundtrack that I felt an immersive experience. I choose to believe that it was the latter rather than the former.

Aspire to Inspire: A five-minute featurette where we get to hear from the film’s director and Alex Morgan about what made them want to take part in the film as well as its cultural significance.

Getting to know Alex: A less-than-five-minute interview with Alex Morgan as well as the film director and Siena Agudong, where Alex highlights her journey from getting cut from her first team to making to the U.S. Olympic team.

Soccer, Script to Set: A playbook on Alex and Me:  A behind-the-scenes featurette that shows the making of the film with Alex Morgan, who talks about the difference between making a movie and soccer as well as being the inspiration for the film.

Outtakes: Literally one outtake that does not even feature Alex Morgan like I originally expected, given that this is her first film, but definitely worth a look. If you had mixed feelings about the dad character during the movie, this scene will make you love him.

I truly recommend the film for parents with daughters. It is an inspirational one that definitely needs to be shared with the younger generation, especially in times of adversity. Like I said, I will be showing it to my daughter again when she is a bit older. I’m thinking around 10 or 11.

Jeremy Butler is a film school graduate of the International Academy of Design and Technology. He is been writing for Upcomingdiscs since 2012; however, movies have played a big part of his life for much longer. Favorite genres include horror, science fiction/fantasy, and comedy. Favorite movies are V for Vendetta, Boondocks Saints, Kiss Kiss Bang Bang, and The Godfather.
Jurassic World: Fallen Kingdom Tuesday Round Up: June 26, 2018