Posted in: Disc Reviews by David Annandale on July 9th, 2018 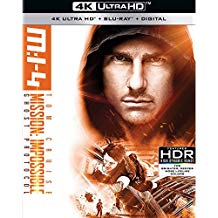 “The Secretary is dead. The President has invoked Ghost Protocol. We’re shut down. No satellite, safe house, support, or extraction. The four of us and the contents of this car are all that remains of the IMF.”

The fourth Mission: Impossible entry exchanges digits for a subtitle, and brings in Brad Bird to direct his first live-action feature. So the man whose The Incredibles made fun of the sort of thing that is the bread-and-butter of the M:I franchise is brought in to revitalize said franchise. Result? Job done. Gotcha. You thought I was going to say, “Mission accomplished,” didn’t you?

The plot kicks off with two missions going badly wrong. One ends with the assassination of an MI operative. The next ends with the Kremlin blowing up and the entire MI organization disavowed. Tom Cruise and his small group (Simon Pegg, Paula Patton, Jeremy Renner) must now operate without sanction to stop Michael Nyqvist from bringing about nuclear war.

The story twists and turns through all sorts of baroque convolutions, and it does get rather difficult at times to keep everything straight. But that is, ultimately, a rather minor problem. The plot is purely functional, existing to get us from one exotic location and elaborate set piece to the next. And these are spectacular. The sequence where Cruise climbs the Burj Khalifa tower in Dubai is, or course, the highlight, a tour-de-force of vertigo-inducing suspense, and this bit alone would probably be enough to qualify this film as the most satisfying entry in the series.

What does, I think, clinch that title is the supporting cast. While the film remains very much Cruise’s show, there is a stronger sense of a team than we’ve had.. well.. perhaps ever in the film series. Though Patton doesn’t register as strongly as her character should, Renner solidifies his claim as heir-in-waiting to the action crown. Pegg, meanwhile, radiates the same unqualified delight to be in this kind of a movie as he did in Star Trek, and his sense of fun is Ebola-infectious.

Mission: Impossible Ghost Protocol  is presented in an aspect ratio of 2.40:1. The ultra-high-definition 2160p  image is arrived at by an HEVC codec with an average bitrate of 55 mbps. There’s a lot of fluctuation in the bitrate of this release. The numbers often fall into the teens and jump as high as 90. I have to say that this ultra-high-definition image presentation marks a quantum leap forward in image quality. While colors aren’t any more vivid or bright, the image jumps in resolution and detail. There’s also far more texture to be found here, particularly in the Russian settings, from establishing shots to the uniforms and fabric. The dust storm plays out with a nice wash of the brown cloud that allows us piercing moments of resolution. There’s a gritty element here that holds up to the closest inspection. HDR provides subtle hues that make this far more realistic and reference than the previous three films. Black levels make a decided turn upward as blacks become far more inky and shadow definition so much more vivid.

The DolbyTrueHD 7.1 track isn’t Atmos or DTS:X. In fact it’s the very same audio presentation found on the earlier Blu-ray. That’s not to say it’s a poor track. The dialog is perfectly clear and never buried in the mix, which could so easily have been a problem, given that this is a pretty loud film. Score and sound effects are given a luxurious treatment. From the opening seconds of the film, the score swallows the listener. And for a fine example of the environmental effects, check out the wind during the Dubai scenes.  The sense of being plunged into the middle of howling chaos is superbly realized.

The extras are all on the second Blu-ray disc with nothing new added for this release.

Mission Accepted: (48:04) A three-part making-of documentary. The focus here is on what was shot in what location: “Suiting Up in Prague,” “Heating Up in Dubai”, and “Vancouver Fisticuffs.” Prepare to get dizzy all over again when you watch the second part.

Impossible Missions: (50:44) Essentially the second part of the larger documentary, this time divided into 11 smaller pieces, covering other stunt moments, props, music, and so on.

Deleted Scenes: (15:02) Eight of them, and here is where we find an optional (but most informative) commentary track from Brad Bird.

One more card on the table – I’m not the biggest Tom Cruise fan, so the film is going to have to work a bit harder to get me on board. This one succeeded, and then some.