Posted in: Disc Reviews by Gino Sassani on July 8th, 2018 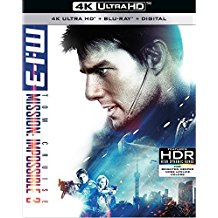 “You can tell a lot about a person’s character by how they treat people they don’t have to treat well.”

It had been a decade since Brian De Palma’s Mission: Impossible hit theatres to box office success, established a new blockbuster franchise, and added ‘action hero’ to Tom Cruise’s resume, and six years since John Woo’s highly stylized follow-up raised the franchise to new box office heights. In 2006 the long-awaited third installment arrived amidst controversy about Tom Cruise’s crazy off-screen antics. It was feared that the happenings of Cruise’s personal life would somehow bring down this movie; the previous two films did set the bar pretty high. Mission: Impossible 3’s  U.S. box office take did appear to suffer from the public backlash to its headliner’s wacky rants and questionable actions. J. J. Abrams’ top-notch action flick likely deserved better. But the third film could have put a halt to any future missions by posting the worst box office of the franchise to date. The $134 million box office was down considerably from the expected $200 million that was reached by all of the other films. As it was there would be another nearly six-year gap before the next outing.

A newly engaged Ethan Hunt has retired from being IMF team leader. It appears he is settling down and enjoying his engagement party, but not for too long. He receives a phone call from an IMF contact, setting up a meet at a nearby Seven-Eleven. At first Ethan turns down the mission, but upon viewing a disposable camera with hidden video he discovers that an ex-partner, Lindsey Farris (Keri Russell) has been captured by Davian and is being held in Berlin. Reluctantly he accepts the mission to get her back. Ethan tells his fianceé that he has to leave on business, and the action begins. An impressive firefight ensues, with well-choreographed action. All seems to have gone well, and Agent Farris is being extracted when it is discovered that there is a self-destructing charge in her brain. An attempt to save her is botched, and the mission is failed. Apart from the death of the primary target, little information was recovered about Davian.

At Agent Farris’ funeral Ethan receives a call from a mail forwarding service letting him know that Lindsay has sent him a postcard from Berlin. At first glance, the postcard is just a postcard, but upon further investigation under the stamp there is a microdot containing a secret video from Lindsey Farris. At this point it is decided that the IMF will not be involved any further in this investigation, and Ethan and his team decide to pursue Davian themselves.

From this point on there are constant advancements in the story line, matched with some great action scenes. From the moment I put the disc in to the moment I took it out, I wasn’t left bored once. Usually in an action movie I don’t expect great acting, but Tom Cruise and Philip Seymour Hoffman were very impressive, especially together. The two enjoyed some pulse-pounding chemistry.  At first I couldn’t picture Hoffman as a bad guy, but by the end of the picture I was more than convinced. He played a calm, witty sociopath. Almost as impressive was Cruise. I didn’t know what to expect, the same guy from Oprah’s couch or the guy from the past. In the end classic Cruise showed up and played a great action role, with a compassionate side.

There were two great scenes that stand out here. Shanghai and Rome each offer edge-of-your-seat action and stunts. Say what you will about Tom Cruise in real life, but on screen he more than does the job here. In the film’s quieter opening scenes he’s just OK, but once the action starts, Ethan Hunt is as dynamic and lethal as ever. The rest of the cast is also strong, including Ving Rhames as the always-entertaining Luther who returns yet again as the computer whiz who is Hunt’s right-hand man. This is the mission that also introduces us to Simon Pegg’s Benji Dunn, who gets even larger parts in future films. He’s a JJ Abrams mainstay and outlives his buddy director in the franchise. Future Tudor star Jonathan Rhys Meyers is also quite dynamic here as a member of Hunt’s team. Let’s not forget that there are two outstanding actresses in the film. Maggie Q has plenty of action as team member Zhen Lei, and Michelle Monaghan as Hunt’s fiancé Julia. And while Kerri Russell doesn’t get a ton of screen time here, she’s also a powerful member of the franchise’s best cast to that point.

Accompanying these performances is a first-rate score by-then-up-and-comer Michael Giacchino (The Incredibles). Danny Elfman and Hans Zimmer left big shoes to fill from the first two films, but Giacchino rose to the challenge. His orchestral score ups the suspense, drives the energy in the action sequences, and switches gears effortlessly to accentuate the dynamic range of emotion explored throughout the film.

Mission: Impossible 3  is presented in an aspect ratio of 2.35:1. The ultra-high-definition 2160p  image is arrived at by an HEVC codec with an average bitrate of 55 mbps. The ultra-high-definition image presentation shines best in the close-up shots when you see the bruised Hunt or the subtle facial acting of Hoffman. The bump in resolution gives us much better refinement here and a better idea of JJ’s intended style choices. The locations are much more vivid here. The HDR comes alive with the shades of water, particularly during the big bridge scene. Black levels go up a notch, and that’s demonstrated greatly in the first rescue mission, which relies on a lot of shadow definition to deliver the goods. Of course, the bright red/orange flames of the many explosions showcase both the enhanced color ranges and the increased contrast abilities of the format. The greenscreen is cleaner here than the first films, so the action really holds up to the increase in resolution and detail. The film has so much more of a natural depth to it that is brought out in the UHD release.

The DolbyTrueHD 5.1 track isn’t Atmos or DTS:X. There’s no 7.1 enrichment here, and I still find that a bit of a disappointment. I keep saying that, but it’s a mystery to me that films with this much action did not warrant a bump in the audio. Instead we get pretty much what we get on the Blu-ray. Yeah, the subs save the day…yet again. Dialog punches through, and the audio presentation is certainly clean. It just isn’t as aggressive as it should be, and we have to contend with being a generation behind on the mix.

The extras are all on the second Blu-ray copy of the film and are also mostly standard definition with nothing new added for this release.

The Making of the Mission: (28:42) Takes us in-depth of the filming of MI:III including interviews with the actors and production staff. It provides a very good look at what goes into making a high-budget movie; definitely worth checking out.

Inside the IMF: (21:15) An inside look at the IMF team; interesting if you want to know more about the hierarchy of the agency, and its players.

Mission Action: (25:38) A look at the key action scenes shows how they were filmed and what went into them.

Visualizing the Mission: (18:40) The previsions made regarding the key actions scenes and the pre-production of them.

Mission metamorphosis: (8:09) One thing I was impressed with and wanted to know more about while watching this movie was the mask-making machine. This feature answered all my questions regarding how it works, and its creation.

Scoring the Mission: (4:58) The music behind the movie.

Moviefone Unscripted: (8:03) Tom Cruise and director J.J Abrams sit down in an unscripted session taking questions and having a conversation amongst each other.

Launching the Mission: (10:24) Takes us to the premieres of the film in New York, Rome, Paris, London, and Japan. It was interesting just to see how nuts the people went over Tom Cruise.

Tom Cruise waited a long while to get J. J. Abrams for this film, believing that Abrams was the only man for the job after binge-watching Alias. This was his first feature film, and it turns out he was indeed a good choice here. He would go on to tackle both the Star Trek and Star Wars universes with pretty solid results. Mission: Impossible III is a powerhouse, and the best of the franchise to that point. While the box office might have been disappointing, the film itself likely pushed the franchise into an even more kinetic style that has been part of it’s trademark now. And there’s still two more of these 4K releases to get to before the sixth film arrives. ” I’m on it! I’m on it! I’m on it!”

Gino Sassani is a member of the Southeastern Film Critic's Association (SEFCA). He is a film and television critic based in Tampa, Florida. He's also the Senior Editor here at Upcomingdiscs. Gino started reviewing films in the early 1990's as a segment of his local television show Focus. He's an award-winning recording artist for Omega Records. Gino is currently working on his 8th album Merchants & Mercenaries. Gino took over Upcomingdiscs Dec 1, 2008. He works out of a home theater he calls The Reel World. Favorite films: The Godfather, The Godfather Part II, The Body Snatcher (Val Lewton film with Karloff and Lugosi, not the pod people film), Unforgiven, Gladiator, The Lion King, Jaws, Son Of Frankenstein, The Good, The Bad And The Ugly, and Monsters, Inc.
Ant-Man and The Wasp Mission: Impossible Ghost Protocol (UHD Blu-ray) (4K)