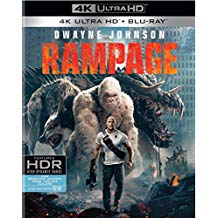 Another one of Dwayne “the Rock” Johnson’s movies is now raising the bar. This new motion picture is filled with intense action. There isn’t only shooting and fighting, but there are also new, but unusual, animals. From smaller, slightly lethal, animals into giants of terror with their mission is to take over the world to please their master. All the power of endless destruction is controlled by Claire Wyden, who is played by Malin Akerman.

What can be wrong with biological engineering? We use it on plants and food, and sometimes we mess with the DNA of an animal to make them better. In this case running tests in space with a mutagen gas on test rats doesn’t go well. As safe as it may seem, this biological engineering experiment on animals ends in a bad way. The splicing of DNA from other animals now leads to giant gorillas, impenetrable armored alligators, and flying wolves.

The movie Rampage is based on a video game. In 1986 a Nintendo 64 game came out also called “Rampage”, and in the game they share the terror of the monsters that try to destroy the city. The idea in the game is to destroy a gorilla, an alligator, and a wolf before they take down all the buildings in cities around the world.  Here, Davis Okoye (Dwayne Johnson) has to defend his best friend George (a gorilla) against the government while protecting the city against a flying wolf and a monster of a crocodile.

This movie can be stereotyped as a regular Dwayne Johnson movie if you watch the trailer. The story and plot seem similar to his movies like San Andreas and G.I. Joe. But don’t give in to trailers, as they can be deceiving. This film is unique even if Johnson still flexes his muscles and saves the world against Mother Nature or a science experiment. And don’t let Jumanji be your guide, either; that was a comedy compared to Rampage.

The CGI used to make Rampage is phenomenal. The animated creatures look so real, even though the wolf and croc monsters have mutated beyond what the animal actually looks like in real life.   The way the monsters destroy the city, knocking over buildings and throwing cars, looks as if it were real and is sometimes terrifying (especially for preteens).

Rampage  is presented in an aspect ratio of 2.40:1. The ultra-high-definition 2160p  image is arrived at by an HEVC codec with an average bitrate of 60 mbps. This ultra-high-definition image presentation pulls out all of the stops. The first thing you’re going to notice is the textured details. The CGI f/x used to create George are pretty amazing, and you can see a lot of the texture of fur that takes on an incredibly realistic look. Black levels are nice with the accompanying layers of shadow definition, but it’s white levels that impress with this HDR presentation. Most of this film plays out in bright daylight, so the white ape against silver and white buildings is an amazing detail. The f/x can’t hide in the shadows, and 4K can reveal a great number of sins, but the computer material blends flawlessly here. There is a notable exception. When the lady gets eaten, the edges aren’t quite so smooth, and the bump in detail likely makes that more obvious.

The Dolby Atmos defaults to an impressive 7.1 track here. Subs are the real stars here. The low end absolutely helps to give weight to these computer-generated creatures. The sound goes a long way in selling the destructive force here. Surrounds deliver so much immersive ear candy that it becomes so easy to put yourself in the middle of this action. Shattered glass, creaking building supports and sirens populate the plethora of surrounds. The score is loud and in-your-face, as is most of this audio presentation. With all of that the dialog comes through completely, and you won’t have to ride your remote control.

Not Just A Game Anymore: (6:15) You get to see some vintage game footage as the cast and crew talk about the hundreds of dollars in quarters they fed into the old arcade game. You get input from the cast and crew as well as some who worked on the old game design. You get the idea there was a lot of passion and nostalgia on set. There’s also some nice concept art and pre-viz footage.

Deleted Scenes: (10:12) There are seven scenes with no individual play option.

Rampage – Actors In Action: (10:45) You get a close-up look at the stunts and wirework along with more pre-viz and concept art. Take a look at the military training the black op actors went through. There’s a director love-fest, of course.

Trio Of Destruction: (10:08) A nice look at all the magic used to bring the three creatures to life. It’s a nice evolution from the primitive video game graphics to the motion-capture creatures on the screen. Lots of early concept art to see here. It’s the folks at WETA here, and they take you completely behind the scenes.

Attack On Chicago: (10:23) While most of the film was shot in Atlanta the action takes place in Chicago. The logistics of shooting establishing shots and plates is explained here. Then we see the sets and extensions that go into putting the action in the midst of the Windy City.

Bringing George To Life: (11:54) George is impressive, particularly those great blue eyes, which of course wouldn’t exist on an albino ape. He’s really a leucistic, but don’t tell anyone I told you that. We get a look at actor ape training school and the motion-capture work that brings emotion to those albeit miscolored eyes.

The good acting built around the mutants makes the film a lot of fun as they are so serious and deliver some nice adventure. Can you imagine reacting to a monster that isn’t really there?  This cast makes their fright and determination to save humanity look real. And I can’t wait to see Johnson again this year in Skyscraper; he’s always fun to watch.

John Delia has been on all sides of the movie business from publicity, writing for publications and on line blogs, script writing, to film making. Writer, critic, film editor he has worked as a film critic on this second go around for 14 years. He earned his Bachelor’s degree at the college of Journalism and Communications at the University of Florida in Gainesville, Florida. John is an active member of the Southeastern Film Critics Association (SEFCA) . Favorite Films: Lord of the Rings/Hobbit trilogies, The Godfather trilogy, the Indiana Jones trilogy (I didn't like the 4th), The Avengers and for TV it's Game of Thrones. As for animation it's a tie between anything Pixar and everything Hayao Miyazaki.
Ismael’s Ghosts The Good Place: The Complete Second Season