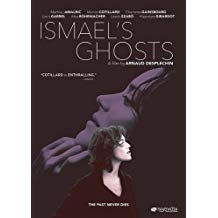 “Don’t be jealous of a ghost.”

In Ismael’s Ghosts, a French filmmaker’s wife strolls back into his life 21 years after her sudden disappearance…much to the chagrin of the director and his current girlfriend. The tension created by the long-lost wife’s return — combined with the question of where she’s been and why she returned — is intriguing enough to carry this film. Unfortunately, Ismael’s Ghosts is filled with way too many silly, half-baked tangents and ends up being as messy and frustrating as its main character.

Ismael Vuillard (Mathieu Amalric) is a director who has trouble sleeping at night as he works on his next film. He has a supportive girlfriend named Sylvia (Charlotte Gainsbourg), who represents the first serious relationship he’s had since the sudden disappearance of his wife Carlotta (Marion Cotillard) 21 years earlier. Carlotta was eventually declared dead, which is why it’s a shock when she strolls up to Sylvia on the couple’s beachside home one day. Needless to say, Carlotta’s return throws Ismael’s life into a tailspin.

It’s tempting to say that the disjoined Ismael’s Ghosts similarly goes off the rails, but that would imply that the movie was on the rails to begin with. In addition to the Ismael/Carlotta/Sylvia triangle, Ismael’s Ghosts regularly works in footage of the spy thriller Ismael is making, which is supposed to be a tribute to his diplomat brother. (Louis Garrel plays the main character in the movie-within-a-movie.) There’s also a handful of scenes dedicated to Carlotta’s distraught dad Henri (Laszlo Szabo), a gruff filmmaker who still aches for his missing daughter. Oh and we get into a subplot involving a line producer (Hippolyte Girardot) and his disastrous attempts to wrangle Ismael back onto the set of his current movie.

I suspect Ismael’s Ghosts will be best appreciated by longtime fans of director Arnaud Desplechin since there are some prominent nods to his filmography. The main character in Ismael’s movie-within-a-movie (Ivan Dedalus) shares a last name with Paul Dedalus, the character played by Amalric in three previous Desplehin movies. Ismael also eventually seeks solace in Roubaix, another recurring place in Desplechin’s films and the director’s real-life birthplace.

So while Desplechin obsessives might delight in unearthing those little Easter eggs, there’s little else for the rest of us to enjoy. It’s a shame because there are brief flickers of brilliance: Carlotta’s oddly matter-of-fact reappearance on the beach effectively captures what it’s like to be in a dream where something doesn’t make sense but you just go with it anyway. Combine that with the fact that Ismael is up at all hours of the night and probably isn’t the most reliable narrator, and you had the makings of a seductive, reality-bending thriller.

But there are ultimately too many detours, most notably the hokey spy thriller that keeps cutting in without warning. These scenes aim to have a more heightened look and feel to them, but the impact is largely lost since the rest of the movie depicting Ismael’s “real life” is so bananas. In fact, there’s so much going on in this movie that the payoff to Ismael making a movie that glamorizes his brother should probably feel like a gut punch but winds up getting lost in the shuffle.

It’s too bad because Amalric (clearly very comfortable working with Desplechin) is the ideal choice to play an insomniac director with a tenuous grip on reality. The actor’s bug eyes make it seem like Ismael hasn’t slept a wink in the 21 years Carlotta has been missing. Cotillard is absolutely enchanting as Carlotta, who becomes less of an enigma as the story goes along. (As a result, some of Cotillard’s performance loses its punch.) I do wish we’d gotten more of Gainsbourg, who plays Ismael’s more pragmatic partner; Sylvia might be the “safe choice,” but Gainsbourg gives her a pleasing spark.

This swollen 134-minute version of Ismael’s Ghosts that is now available on DVD is Desplechin’s director’s cut and supposedly 20 minutes longer than the original theatrical version. Unfortunately, the extra footage does little to clarify or make us care about the extraneous subplots. Clearly, Desplechin has thrown a lot of his own personal passions and obsessions on the screen and hoped some of them would stick. Actually, that’s not quite true: for better and worse, Desplechin doesn’t seem to care one way or the other whether the audience comes along on this wild, disorienting ride.