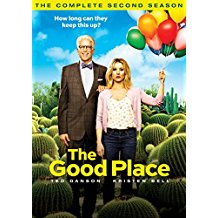 “I would say I outdid myself, but I’m always this good…so I simply did myself.”

Season 1 of NBC’s The Good Place received top marks from me for its inventive, good-hearted, and hilarious approach to comedy. But what really put the show over the top was a game-changing finale twist that rivaled anything we’ve seen on the big screen in terms of shock value. (There’s no way to avoid discussing this swerve going forward, so if you’ve never seen the show, go binge the first season real quick.) Blowing up everything we thought we knew about an already Good great show was a risky move, but I’m delighted to report that season 2 maintains (and builds upon) the show’s excellence.

“My name is Eleanor Shellstrop, and I think I might be a monster…”

Alright, let’s dive in: The Good Place follows the misadventures of Eleanor (Kristen Bell), who is accidentally granted entry into a utopian afterlife following a less-than-admirable life on Earth. However, at the end of season 1 we learn that Eleanor — along with indecisive ethics professor Chidi (William Jackson Harper), annoyingly overachieving philanthropist Tahani (Jameela Jamil), and doofus amateur DJ Jason (Manny Jacinto) — have actually been in The Bad Place all along! The utopian neighborhood-masquerading-as-The Good Place is an elaborate ruse orchestrated by Michael (Ted Danson), a dapper demon who aspires to a higher form of torture. Season 1 concluded with Eleanor discovering “Michael’s Gambit”…and Michael erasing everyone’s memory and starting over.

The two-part season 2 premiere (“Everything is Great!”) is hugely satisfying on several different levels. As Michael embarks on his second attempt to torture our heroes with his fake Good Place, we basically get to re-live the entire first season in a little less than an hour…and from a spectacularly sinister new perspective. It’s no big spoiler to say that Michael’s gambit doesn’t go according to plan (again), and he starts to feel the heat from skeptical supervisor Shawn (Marc Evan Jackson). In fact, Michael’s repeated failures to satisfy his bosses and co-workers — who prefer more traditional methods of torture — eventually cause him to join forces with his four “victims” and learn what it means to be human.

Ok, I realize that last bit makes The Good Place sound like the hokiest thing in the world. But creator Michael Schur (Parks and Recreation, Brooklyn Nine-Nine) and his team approach the question of what it means to be a good person with a killer combination of sharpness and silliness.

In addition to the repeated (and deserved) shots at Jason’s beloved hometown of Jacksonville — season 2 happened to be airing at the same time the Jacksonville Jaguars were making their unlikely run to the AFC title game — The Good Place writers have plenty of fun with the fact that the series is now openly set in the Bad Place. As a result, the presence of Hawaiian pizza, New Yorker magazines that never get read, and coffee that comes from those little pods make a lot more sense. The peak is Ep. 11/“Rhonda, Diana, Jake, Trent,” which has the heroes infiltrating Bad Place headquarters and literally attending a cocktail party from hell. (Even Dax Shepard, Bell’s real-life spouse, is there!)

This is also a show that shouts out Kierkegaard, the philosophical concept of “moral desert”, and builds an entire episode around thought exercises like the Trolley Problem to explore issues of personal responsibility, whether it’s ever ok to lie, and if humans deserve a reward for being “good.” (After all, aren’t we *supposed* to be good?) Even before it’s explicitly stated in the finale/“Somewhere Else,” the show settles on the idea that it’s the people around us who make us better and drive us to be good (or bad). The Good Place ensemble makes a strong case for that line of thinking, especially now that we’ve watched these characters grow together over time.

Ted Danson is already one of the best and most beloved TV performers of all time — in a cool little nod to his Cheers days, Michael gets to tend bar in the finale — but he brings an extra dose glee (now that Michael’s demonic side is out in the open) and wonder (as he scoffs at and absorbs the complexities of human behavior) to his performance in season 2. Still, the ensemble is led by Bell, who displays the same spunk and resourcefulness here as she did in her breakout role on Veronica Mars. Eleanor’s hustle and exasperation line up with the show’s notion that being a good person takes work.

I’m still not sensing a romantic spark between Eleanor and Chidi (her supposed pre-determined soulmate), but there’s absolutely a strong connection between these two polar opposites. While Jamil (as snooty Tahani) and Jacinto (as dumber than a box-of-rocks Jason) generate consistent laughs, my favorite supporting player is still D’Arcy Carden’s Janet, the group’s all-knowing, ever-present guide. (And definitely not a girl.) In season 2, Carden gets a romantic arc (featuring guest star Jason Mantzoukas) and delivers a second, equally hilarious performance as “Bad Janet,” her Bad Place counterpart. Meanwhile, Maya Rudolph turns up in the final few episodes as the surprisingly down-to-earth Judge (Hydro)Gen.

The show continues to be much more serialized than your typical network sitcom, with many episodes ending in a cliffhanger. While this second season finale lacked another earth-shattering twist, we do get a bold departure from the show’s formula that once again leaves me completely excited (and confounded) about what The Good Place will look like going forward.