Once Upon A Time: The Complete Final Season (Blu-ray)

Posted in: Disc Reviews by Gino Sassani on September 24th, 2018 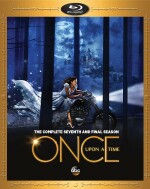 “Once upon a time there was a magical forest filled with fairytale characters. One day a powerful curse trapped them in a city which had no magic, and each of them forgot who they really were. This is how it happened…”

Once Upon A Time hasn’t been a big ratings winner for the last few years. Each season the show appeared on the bubble and ended up getting renewed at the last minute. One of the reasons the show managed to escape the axe was because it had some value for the network’s parent company, Walt Disney Studios. The show was a good way to keep the studio’s properties in front of an audience. That’s pretty much what the show finally became. They threw the books at us, from Frozen to The Little Mermaid. With that value in mind, the decision was made last season to keep the show but completely retool it. The network cut most of the cast and started the story over again.

The only remaining cast members of the show’s first six years are Lana Parrilla, Colin O’Donoghue, and Robert Carlyle. A couple of the other regulars like Jennifer Morrison (Swan) and Emile deRavin (Belle) show up for a single episode, while Rebecca Mader (Zelena) shows up at the midseason point and remains for several episodes. Pretty much every cast member who has ever been on the show returns in the last couple of episodes for a huge gathering in the finale.

The story is reset. This time it’s an adult Henry, now played by Andrew J. West, who is living in Seattle as a struggling writer, when young Lucy (Fernandez) shows up at his door claiming to be his daughter. She spins a grand tale that her mother is actually Cinderella (Ramirez), and now they all live in a neighborhood of Seattle called Hyperion Heights. This begins as a fairytale version of gentrification. Victoria Belfry (Anwar) is really Cinderella’s evil stepmother and is buying out all of the property in the neighborhood to build a condo tower. One of the folks she’s trying to run out is Roni, a bar owner, who is really Regina with her memories gone. The neighborhood police force includes two 70’s-era type police detectives. There’s the young detective Rogers, who is really Captain Hook, and his mysterious partner Detective Weaver, who is really Rumple. Belfry’s daughter, Ivy (Kane) is the one who created the curse, but we soon learn she was manipulated into the action by the season’s true big bad, a coven of witches led by a character named Mother Gothel, played by Emma Booth.

This is a very different version of Cinderella. She didn’t go to the ball to meet her prince. She went there to kill him, and that’s where the various story needs are manipulated leading to the new curse.

The series still uses the double-narrative style of showing us parallel moments in the fairytale land. There Henry has teamed up with a “wish-land” version of Hook, who is trying to reclaim his daughter who turns out to be Rapunzel. This Hook was actually a more evil version of the one we’ve come to know, but he is inspired to seek redemption by a Swan cameo. There are also some stories that involve the old New England town of Storybrooke that involves the young Henry, played again by Jared Gilmore. Lana Parrilla gets to play several roles over the season, and she pretty much anchors all of these stories together. Of course, as characters “wake”, they start to become more like their old Storybrooke selves once again.

There is another story thread that travels through the main issues. Lana and Robin Hood’s daughter is now grown, and she hooks up with Hook’s daughter, who is also Alice from Wonderland…and other places. In Seattle she’s a crazy street urchin who was an informant for Weaver. It’s all terribly complicated, and it’s the kind of story threads that were likely expected to take several years to play out. The show’s ratings continued to decline, and the pressure was on to wrap this entire reboot in just one season. So the results end up feeling entirely too rushed and complicated. There just wasn’t enough time to do any of this justice.

Deleted Scenes: (15:25) There are eight from the entire season with a play-all option.

And They All Lived Happily Ever After: (22:28) Cast and crew talk about their favorite moments from the seven years. They also provide reactions to clips from the show’s run. Pretty much everyone is included but Carlyle.

Capturing Magic – Lana’s Directorial Debut: (3:53) A feature on the first directing job ever for Lana Parrilla.

I’ve been a bit sparse with the event details, because the season moves at such a clip it’s really better for you to discover them along the way. It would also require pages of a review. This release is a must-buy only for the fans who want to have a complete set. It didn’t do well at all in the ratings. I do expect that something of this nature will return. It’s too valuable for Disney to have something that keeps so many of their properties alive and in front of viewers. I hope if they do it next time, they try not to allow it to get so campy. Sprinkle the stuff in lightly, and try not to jam so much into each episode. The f/x were often too ambitious and stood out. For fans of the show, you do get some closure. Everyone is in the finale, and the story gets tied up in a neat enough bow. “You wanted a happy ending. Now you can stick yours on a shelf.”

Gino Sassani is a member of the Southeastern Film Critic's Association (SEFCA). He is a film and television critic based in Tampa, Florida. He's also the Senior Editor here at Upcomingdiscs. Gino started reviewing films in the early 1990's as a segment of his local television show Focus. He's an award-winning recording artist for Omega Records. Gino is currently working on his 8th album Merchants & Mercenaries. Gino took over Upcomingdiscs Dec 1, 2008. He works out of a home theater he calls The Reel World. Favorite films: The Godfather, The Godfather Part II, The Body Snatcher (Val Lewton film with Karloff and Lugosi, not the pod people film), Unforgiven, Gladiator, The Lion King, Jaws, Son Of Frankenstein, The Good, The Bad And The Ugly, and Monsters, Inc.
Jurassic World: Fallen Kingdom (UHD Blu-ray) (4K) Tuesday Round Up: September 25, 2017