Posted in: Disc Reviews by Gino Sassani on September 24th, 2018 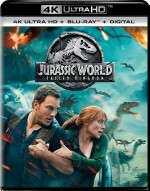 By the time you get to the fourth sequel of a film, the results are usually not very good. Even a groundbreaking film like Jurassic Park has been followed by at least one terrible sequel. The problem with these kinds of things is pretty easy to figure out. You can’t please all of any film’s diehard fans, and it’s hard to continue to deliver on the formula’s expectations, all the while breaking new ground without the result feeling more contrived than original. That’s certainly all been true of this franchise. When Jurassic World set all kinds of box office records three years ago, it appeared that those entrusted with this franchise had found a way to turn it around. Now the expectations have jumped even higher. There appears no place to go but down, and for the first hour of Jurassic World: Fallen Kingdom, that’s exactly what appears was going to happen. But then somewhere around the third act, the film took a turn that suddenly sent the franchise into an entirely new genre. The last third of Fallen Kingdom accomplishes something that should have always been where this whole ride headed. Fallen Kingdom is a rehash of the previous films in many ways. There are the iconic poses and the regurgitated scenes. But before the credits start to roll on this one, it becomes something terribly wonderful. It is genuinely scary. Now, certainly, the previous films had some scary moments. There was some of it in the first film’s kitchen chase. But for all of its scares, it was really just more dinosaurs chasing people. Now don’t get me wrong. I’m really cool with that, but been there, seen that. You see, Fallen Kingdom takes that fright to an entirely new level. Science fiction and horror haven’t combined this well since Alien.

The film begins with news reports that the Jurassic World island has pretty much been abandoned since the events of the last film. But now a volcano has become active, and it’s started a huge debate from the classroom to the halls of Congress. Should something be done to save the animals, or should we just let nature take its course to extinction… once again. A cameo by Jeff Goldblum reprising his Malcolm character takes the position that we should indeed let the dinosaurs perish. But there are groups dedicated to raising awareness and the funding to save them. Count Claire (Howard) in that group. The fate of the dinosaurs appears sealed when she gets a call to visit Benjamin Lockwood (Cromwell), who was Hammond’s partner back in the beginning. He wants to send a force to rescue the dinosaurs and bring them to a sanctuary island that appears perfect. It’s isolated and with enough natural boundaries to keep them safe and away from human interaction. So Claire puts together a team of veterinarian Zia (Pineda) and computer tech Franklin (Smith), and they convince Owen (Pratt) to join them by pulling at his heartstrings to save Blue. They reach the island and meet Ken Wheatley (Levine), who is in charge of the operation. But he and Lockwood’s assistant, Eli (Spall) have other more mercenary plans for the dinosaurs. The result is that instead of ending up in the sanctuary, they end up in California at the Lockwood estate for a power auction. But that’s not all that’s at the estate.

BD Wong returns as Dr. Wu, and they have created a new creature that combines the DNA of a raptor with that of the Indominous Rex. This is the ultimate weaponized animal that combines the intelligence and trainability of the raptors with a larger, more deadly and vicious creature. The discovery is made by young Maisie Lockwood (Sermon), who under the care of Iris (Chaplin) lives at her grandfather’s estate. She’s also the subject of something I won’t reveal here. It’s given almost as a throwaway plotline here, but I suspect it heralds the direction of the third film in this planned Jurassic World trilogy.

The beginning of the film plays out too much like The Lost World: Jurassic Park played out. It deals with the capture of dinosaurs and the expected betrayals. Plenty of folks running from and trying to capture dinosaurs. The exception to the reused plot and visuals is the stunning destruction of the island volcano. Believe it or not, the dinosaurs really play second to the f/x of the decaying island. The segment is short and so not quite the focus of the film as the trailers and early buzz have you believe. It’s really just an elaborate setup, and one that gives way to a much more original and compelling drama.

Jurassic World is presented in an aspect ratio of 2.39:1. The ultra-high-definition 2160p  image is arrived at by an HEVC codec with an average bitrate of 50 mbps. This ultra-high-definition image presentation brings these creatures to life like never before. It’s really a combination of the heightened detail and the added appearance of depth that breathes life into the dinosaurs. Jurassic Park set the bar high nearly 30 years ago, but it keeps getting higher, and the UHD/HDR improvements in home video can finally bring it to your own theatre. Black levels are nothing short of magnificent. The climactic cat-and-mouse on the roof of the mansion in the rain provides depths of shadow definition that will blow your mind. You have a dark sky. A very dark dinosaur with black claws in the rain. All of the detail remains with layers upon layers of subtle but distinctive black images. The color is most evident in the daylight on the island. There the dinosaurs are more vivid in their colors. The volcano’s lava provides the bright vivid end of the film’s color spectrum. This is absolutely a theatre showoff piece.

The DTS:X track defaults to an aggressive 7.1 mix. The subs and clarity combine to deliver the famous T-Rex roar. But it also serves wonderfully in more subtle ways. The clicking of the hybrid raptor’s claws against the hardwood floors and later the roof shingles is one of the creepiest sounds in the film. It surrounds you and never dominates. There’s always something just out of your field of vision that keeps you on the edge of your seat in anticipation of what is out there. Dialog breaks through perfectly, and placement of everything is the key to what might not be the best Jurassic film, but certainly the most atmospheric.

On Set with Chris & Bryce: (3:05) You get some candid moments with the two leads getting a little crazy on the set. Steven Spielberg talks about the pair’s chemistry.

The Kingdom Evolves: (4:33) A look at the film’s evolution from the original Jurassic Park with clips from both. Cast and crew talk about the impact that first film had on them. We get a look inside the idea for this Jurassic World trilogy with one film yet to come. You get some concept art and pre-viz from this film.

Return To Hawaii: (2:41) A look at the Hawaii locations. The cast and crew talk about being back and on some of the same locations used for Jurassic Park. There’s also a little behind-the-scenes of the lava encounters.

Island Action; (6:01) We’re not just talking about Hawaii. The feature breaks down the bunker scene where the exteriors were shot in Hawaii and the interiors at Pinewood Studios in England. We also get a look at the mini rollercoaster that was built to give the actors a chance to feel the drop in the gyro-ball. It must have been cool to have their own rollercoaster (also shot in England).

Aboard Arcadia: (5:53) This behind-the-scenes feature focuses on the scenes on board the ship.

Birth Of The Indoraptor: (4:09) A behind the scenes look at the various ways the featured creature was created. There are lifelike puppets that were used for close-ups and puppet claws for those close encounters of the sharp kind. There’s a tour of the mansion’s basement lab set along with some concept art.

Start The Bidding: (3:18) We are mostly treated to the stunt work for the auction scene once dinosaurs break up the party.

Death By Dino: (1:33) This behind-the-scenes piece focuses on the scene where Ted Levine gets his.

Monster In The Mansion: (3:06) A continuation of the ways the raptor was created with the focus this time on the chase inside the mansion. There’s a rather interesting concept, as they show the girl’s bedroom where a game of real dinosaurs fighting plays out amidst the furniture and toys.

Rooftop Showdown: (3:48) Now the action moves outside to the final showdown. There are some storyboards to show the scene’s evolution.

VFX Evolved: (7:08) A look at the layers of f/x that go into the final film footage on key scenes. A look at more of the tricks both practical and digital to bring the raptor and Blue to life.

Chris Pratt’s Jurassic Journals: (12:09) There are 12 of these short pieces with a handy play-all. Pratt introduces us to some of the key crew folks that worked on the film.

Suspense is allowed to build as the animals are being transported and our heroes attempt to get the upper hand. The auction turns out about as well as you’d expect and a King Kong-style escape of the new terrifying creature fills the remaining moments of the film. Unlike the T-Rex romp in the second film that always felt tacked on, this is a more intimate encounter that is far more satisfying than the worn monster-on-the-loose-in-a-big-city that has become a bit overdone. This is more of a stalk than a romp, and we get a lot closer to the action because it doesn’t expand. Here I was reminded of some of the old Ray Harryhausen films, and I could swear there were attempts to create moments where the creature would take on some of the characteristics of a stop-motion creature. The moments were short and in no way take away from the incredible modern f/x this creature demonstrates. But those flashes brought a wave of emotional nostalgia for me that made it all the more compelling. For the first time in a long time a film held me to the edge of my seat and I was completely drawn into the moment. The final moments of Fallen Kingdom rival anything I experienced in any of the previous four films, which I had just gotten to watch recently in 4K. This film might have had a shaky start, but it finishes strong, leaving the audience with some nice refreshing chills. “There’s no going back now.”

Gino Sassani is a member of the Southeastern Film Critic's Association (SEFCA). He is a film and television critic based in Tampa, Florida. He's also the Senior Editor here at Upcomingdiscs. Gino started reviewing films in the early 1990's as a segment of his local television show Focus. He's an award-winning recording artist for Omega Records. Gino is currently working on his 8th album Merchants & Mercenaries. Gino took over Upcomingdiscs Dec 1, 2008. He works out of a home theater he calls The Reel World. Favorite films: The Godfather, The Godfather Part II, The Body Snatcher (Val Lewton film with Karloff and Lugosi, not the pod people film), Unforgiven, Gladiator, The Lion King, Jaws, Son Of Frankenstein, The Good, The Bad And The Ugly, and Monsters, Inc.
Life Itself Once Upon A Time: The Complete Final Season (Blu-ray)