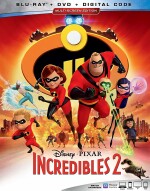 For a while, it honestly felt like Disney/Pixar was messing with us. When The Incredibles swooped into theaters in 2004, it was simultaneously one of the best animated/action/superhero movies I’d ever seen. Plenty of people shared that opinion, so a sequel seemed like a no-brainer. That’s why it seemed like a cruel joke when we got not one but two forgettable Cars sequels before The Incredibles got a chance to suit up again. Guess what…the wait is officially over!

“You’re not sticking me with babysitting!”

As you’ve probably heard, The Incredibles 2 picks up immediately where the first film left off. Mr. Incredible/Bob Parr (voice of Craig T. Nelson), his wife Elastigirl/Helen Parr (Helen Hunt), and their kids Violet (Sarah Vowell) and Dash (Huck Milner) face off against The Underminer (Pixar lucky charm John Ratzenberger) and bicker over who’s supposed to be watching Baby Jack-Jack. The ensuing battle — the first of several breathtaking set pieces in this film — causes a conspicuous ruckus and results in a lot of damage; it barely matters that The Incredibles saved the day because superheroes are still illegal.

The tussle with Underminer does catch the eye of Winston Deavor (Bob Odenkirk), a slick-talking mogul who runs a telecommunications behemoth called DEVTECH with his brilliant sister Evelyn (Catherine Keener). Winston — a superhero fanboy in his youth — enlists Bob, Helen, and Frozone/Lucius Best (Samuel L. Jackson) in his scheme to drum up support for superheroes and reverse the law. Bob is excited to slip back into his supersuit…until Winston reveals that Helen will be leading the campaign, due to her less destructive crime fighting style. That leaves a bitter Bob to play stay-at-home dad to Violet, Dash, and Jack-Jack.

The fact that Bob is better equipped to do battle with deadly supervillains than he is to deal with a surly teen, New Math, and an unpredictable baby is part of the genius of The Incredibles two-logy. Despite all the visual dazzle and clever quips, these are family films in the truest sense of the word. All the scenes with a prideful, bleary-eyed Bob barely keeping his head above water tending to the children are gold, even if jokes about New Math being confusing and teenagers being moody feel obvious and a tad creaky.

“Superheroes are part of your brainless desire to replace real experiences.”

On the other hand, Elastigirl taking a more active crime fighting role is exciting for several reasons. Not only is it satisfying to see a female superhero getting a chance to kick butt alongside her male counterparts, but it’s a fortuitous bit of timing given all the recent scandals in Hollywood. (Pixar hasn’t been immune.)

Speaking of timing, Incredibles 2 arrives in a vastly different moviegoing landscape in terms of audience’s attitudes toward superhero entertainment. The first film felt fresh and funny as it pointed out and poked fun at various tropes, such as the impracticality of capes and the foolishness of monologuing. The sequel mostly punts on those sorts of insights, opting instead for a general celebration of people who embrace their gifts and do the right thing in the face of adversity.

Then again, there are plenty of things that have aged rather nicely in Incredibles 2. The film’s art deco design and Michael Giacchino’s jazzy, rousing score are intentionally timeless and just as transporting as they were 14 years ago. Director/writer Brad Bird also knows how to stage a large-scale action sequence better than almost any director working today. (That includes anyone working in live-action.) In addition to the face off with Underminer, there’s a terrific sequence with Elastigirl on a motorcycle chasing down a runaway train that is The Incredibles in a nutshell: visually witty and exhilarating while maintaining at least one eye on family.

Not only is it a pleasure to see everyone back, but it’s good to hear them too. Hunter excels in her expanded role, while Nelson has perfected the art of lovable grumpiness. Jackson gets a bit more to do here as Frozone, but still feels a little underused. As for the new additions, it’s hard not to suspect that Deavor is up to something sketchy since he’s voiced by Better Call Saul star Odenkirk, but the scenes with the Deavor siblings end up being the least inspiring bits in the film.

Of course, it was always going to be nearly impossible for The Incredibles 2 to surpass (or even approach) the original in terms of creativity and innovation. But even fellow Pixar sequel Toy Story 2 managed to give us a lasting creation like Jessie the Cowgirl. The Incredibles 2 does introduce a new squad of formerly-closeted superheroes who are inspired by Elastigirl’s exploits to step into the limelight. (I can see this group starring in their own Pixar short, if not a full-blown spinoff.) However, the breakout character of the sequel — besides scene-stealing superhero costume designer Edna Mode (voiced by Bird) — is Baby Jack-Jack with his growing array of superpowers. Edna and Jack-Jack together are the real power couple.

Incredibles 2 is presented in an aspect ratio of 2.40:1. The 1080p image is arrived at with an AVC MPEG-4 codec at an average of 22 mbps. Unlike a lot of superhero films that strive for grit and grime in their visual palette, the Incredibles films have always embraced the brighter, bolder aspects of (non)caped crusaders. So it’s no surprise that this Disney Blu-ray presentation features outrageously vibrant colors — with a special emphasis on deep reds, of course — to go along with tremendously fine detail. At the other end of the spectrum, this disc also offers exquisitely inky black levels for darker sequences, such as Elastigirl’s mid-film pursuit of Screenslaver. I expected this presentation to dazzle…and it was even better than I thought it would be.

The DTS-HD Master Audio 7.1 track is somehow even more impressive than the visual presentation, which earned top marks from me. While I still firmly prefer the first film to this sequel, Incredibles 2 features some of the best set pieces I’ve seen in a good while and this track helps immerse the viewers in the action. Yes, we get the expected (and room-rattling) sub activity during Underminer’s rampage at the start of the film. But the action is also expertly curated to the point that the tiny pebbles bouncing off Underminer’s giant drill can each be heard across various channels. That’s just one example of the attention to detail on this track, which also makes Michael Giacchino’s jazzy score feel more potent and propulsive.

(Features available on Disc 1 with the film.)

Bao: (7:41) This charming, oddball Pixar short — the first to be directed by a woman — is about a mother suffering from empty nest syndrome who forms an unhealthy attachment to…a dumpling. Not my favorite Pixar short by a longshot, but it fits nicely alongside Incredibles 2 with its focus on family.

Auntie Edna: (5:08) Much like the Jack-Jack Attack short from the first film centered on the youngest member of the Parr family terrorizing a babysitter, Auntie Edna finds the scene-stealing costume designer exploring the depths of Jack-Jack’s power(s). These two were probably the best parts of the sequel, so more of them is a good thing, even though this short is nothing special.

Strong Coffee — A Lesson in Animation with Brad Bird: (18:50) This featurette focuses on the extraordinary (and work-weary) animation crew…and how the movie’s director serves as a much-needed does of energy. We also get a bit of background on Bird’s career and glimpses at the incredibly subtle touches that add crucial bits of personality to animated characters.

Feature Commentary: Right off the bat, Bird announces this isn’t going to be the typical commentary with a director droning on about his film. Instead, the Incredibles 2 writer/director quickly cedes the floor to his team of animators, including animation supervisors Dave Mullins, Alan Barillaro, Tony Fucile, along with Bret Parker, who served as the animation second unit and crowd supervisor. Needless to say, this track provides an excellent deep dive on the animation process and the (often-unnoticed) work that goes into the background of scenes.

(Features available on the Bonus disc.)

Heroes & Villains: (25:35) Mini featurettes dedicated to each of the movie’s key characters: Mr. Incredible, Elastigirl, the Parr Kids, Frozone, Edna Mode, Winston Deavor, Evelyn Deavor, and the Wannabes. Features input from the film’s voice actors, Bird, and other members of the crew. Features a Play All option.

Vintage Features: There are Vintage Toy Commerials for Mr. Incredible (0:32), Elastigirl (0:32), and Frozone (0:32), who gets a funky, Shaft-inspired spot. There are also Character Theme Songs for Mr. Incredible (0:32), Elastigirl (0:32), and Frozone (0:32) that really aren’t all that different from the vintage commercials. There is no Play All option, which would’ve been nice here.

Deleted Scenes: (39:44) There are 10 scenes plus an introduction from director Brad Bird. The scenes include an alternate opening re-establishing the destruction of the Parr family home, along with Bob and Helen visiting the parents of the first film’s traumatized babysitter (the latter is Bird’s personal favorite). As is usually the case with animated films, the scenes here are actually storyboards and they each include commentary from Bird. Features a Play All option.

In the end, Incredibles 2 is a relentlessly entertaining thrill ride that gives fans more of what they loved the first time around, which is also the reason this sequel doesn’t fly as high as its predecessor.

The film, however, is bolstered by this Blu-ray release featuring a top-shelf A/V presentation and a solid stash of special features.