Beyond The Sky (Blu-ray)

Posted in: Disc Reviews by Brent Lorentson on November 8th, 2018 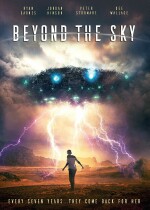 Ever since I was a kid, I’ve been fascinated by UFO stories. It’s a big part of what got me into watching The X-Files.  Whether you are a believer or not, there are groups all over the world where people get together and share their experiences about their abductions and how they attempt to cope with the trauma of the event.  Beyond the Sky is a film that is sort of a mockumentry about Chris Norton (Ryan Carnes) who has been attempting to find out what happened to his mother after she went missing on his seventh birthday.  Now years later, he takes his “documentary” to a UFO convention to meet with abductees and in the process comes across Emily (Jordan Hinson), who may help him on his journey to find the truth.

The trouble I had with the film is its inability to stick with a style as it juggles between being a documentary and simply being a film.  It being inconsistent with its style is kind of annoying and only gives the impression that the director really didn’t know what they wanted to do with the film, and that’s a shame, because there is a good story to be found here.

Emily is only days away from her next birthday, one that will bring her abductors, which is what Chris is hoping to record, and in the process of getting to know Emily, it’s no surprise he seems to develop feelings for the girl.  Carnes’ performance is a bit rough at first, but his character does manage to grow on you, especially after a moment where he and his cameraman have an encounter of their own.  But it’s Hinson who really carries the film and gives it heart.  Emily is a very sympathetic character who seems to have accepted her fate, but we hope for the best with her.

With brief appearances from Dee Wallace and Peter Stormare, the film does attempt to make the most of its production values, but unfortunately it just doesn’t embrace the tension and foreboding terror that the characters should be experiencing.  At a brisk 82 minutes, I feel this film should have been longer and had us spend more time with the characters and build up some tension, but unfortunately we’re left with a “meh” experience that could have been so much more.

Beyond the Sky is presented in the aspect ratio 1.85:1.  The 1080p image is arrived at with an AVC MPEG-4 codec at an average of 28 mbps.  The overall look of the film is clean and polished, but considering they were attempting a pseudo-documentary feel, it just looks like a low-budget film instead.  In the final act the effects look nice, but look too CGI, and as though the set was on a green screen.

The DTS HD-Master Audio 5.1 track is relatively simple, since most of the film his with the characters talking. There is some basic foley work here, but not something you’d come across in bigger-budget films.

It’s nothing great, but those who enjoy a good abduction story should have fun with this.

Brent Lorentson is a horror writer and film critic based out of Tampa, Florida. With a BA in Digital Film, he co-wrote and co-directed Scavenger Hunt. His short stories have appeared in various horror anthologies. In 2019 his short script Fertile Blood will be a part of the anthology horror film Slumber Party. He is currently working on his first novel A Dark and Secret Place set to be released in late 2019. Favorite Films: Taxi Driver, Fight Club, I Saw the Devil, The Wild Bunch, Dawn of the Dead, A Clockwork Orange, Pulp Fiction, Heathers, The Monster Squad, and High Fidelity.
Mandy (Blu-ray) Incredibles 2 (Blu-ray)