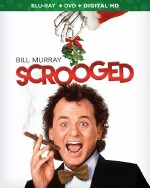 “I get it. You’re taking me back in time to show me my mother and father, and I’m supposed to get all goosey and blubbery. Well, forget it, pal…you got the wrong guy!”

Bill Murray was the absolute best at being a jerk on screen during the 1980s, which made him the right guy to step into the role of a modern-day Scrooge. Charles Dickens’ “A Christmas Carol” had been adapted countless times before Scrooged and there have been dozens of versions since the movie’s 1988 release. But while this sarcastic, intentionally gaudy update isn’t exactly the most faithful version of Dickens’ classic tale, it remains a personal childhood favorite.

Ruthless Frank Cross (Murray) is the youngest network president in the history of television. (We know this because Frank mentions this during the first five minutes of the movie.) Frank’s IBC network is gearing up its holiday programming, with the centerpiece being a garish live production of “A Christmas Carol,” featuring (among others) Buddy Hackett, Mary Lou Retton and the Solid Gold Dancers. On the eve of the special, Frank is visited by the ghost of his miserly mentor (John Forsythe), who warns Frank to change his ways. He also informs Frank that he will soon be visited by three ghosts.

If you celebrate Christmas, then you know the rest. The film was directed by Richard Donner, who was coming off quippy action classic Lethal Weapon the year before. As a result, Scrooged came with a $32 million budget — quite a lot for a comedy at the time — and the movie sometimes threatens to become as tacky as the fake Christmas specials it is lampooning. (There are cameos from the likes of Lee Majors and Robert Goulet.)

I imagine there are some Dickens’ purists who scoff at a lot of changes, but the script by Mitch Glazer and Michael O’Donoghue features some ingeniously wacky updates. That includes re-imagining the Ghost of Christmas Past (David Johansen) as a cackling, cab-driving insult comic and having the Ghost of Christmas Present (Carol Kane) literally try to knock some sense into Frank. But while Johansen and Kane are the two most memorable scene-stealers here — the overly creepy, pseudo-futuristic take on the Ghost of Christmas Future still feels like a misfire — none of this works without Murray.

Scrooged was the actor’s first starring role after Ghostbusters made him a superstar four years earlier. Murray intentionally receded from the limelight, but he returns here in all his sarcastic, winningly-jerky glory. The performance, like the movie itself, is probably more over-the-top than it needs to be. But Murray is so convincing and entertaining as a miser with a heart of gold that it works. He also has strong chemistry with Karen Allen, who plays the do-gooder dreamgirl that Frank abandoned in favor of a network TV career.

The loaded supporting cast includes an amusingly buttoned-up Bobcat Goldthwait as the sad sack network employee who becomes Frank’s punching bag. (Bobcat eventually gets unleashed in all his rumpled glory.) One of the more affecting subplots features Alfre Woodard as Frank’s beleaguered personal assistant Grace, who serves as a Bob Cratchit stand-in. (Grace’s mute son is this version’s Tiny Tim.) In addition to Forsythe, there are also appearances from the likes of Robert Mitchum (as Frank’s current boss), Michael J. Pollard (as a friendly homeless guy in the shelter where Claire works), and more.

Naturally, there are parts of this movie that haven’t aged very well; for example, I can’t imagine Frank and the female Ghost of Christmas Present engaging in fisticuffs if this movie came out in 2018. That being said, the movie — including the entirety of Kane’s bits as the Ghost of Christmas present — remains very funny after 30 years and a holiday staple in my house.

Scrooged is presented in an aspect ratio of 1.85:1. The 1080p image is arrived at with an AVC MPEG-4 codec at an average of 36 mbps. This 30th anniversary release contains the same transfer as previous Blu-ray editions of Scrooged, which have been pretty faithful to the film’s original look. The image doesn’t boast the sparkly sheen you get from most Christmas movies, but the fact that this presentation is a bit darker works for the cynical and scary parts of the story. (Namely, when the Ghost of Christmas Future shows up.) This is a largely blemish-free presentation that hasn’t been artificially scrubbed of its rougher edges, which is how it should be. Black levels are nice and inky, especially during the Ghost of Christmas Present’s arrival at a solitary TV studio. Overall, this remains a very solid (if unspectacular) HD upgrade for one of my favorite childhood Christmas movies.

The DTS-HD Master Audio 5.1 track is still pretty underwhelming considering Scrooged packs more of a wallop than the typical dialogue-driven comedy. (And I’m not just talking about Carol Kane’s slap-happy Ghost of Christmas Present.) The movie actually opens with a fair amount of gunplay thanks to the crass promo for a Lee Majors Christmas special. But instead of occupying the entire sound field and immersing the viewer in the action, the bullets only fly between the front speakers. (The same goes for Frank’s manic cab rides with the Ghost of Christmas Past.) The rears are mostly used to support and enhance Danny Elfman’s memorable score, although we do get some decent sub activity during that explosive opening sequence as well as Frank’s intense elevator ride with the Ghost of Christmas Future.

To be clear, this is a re-issue of previous Blu-ray editions of Scrooged to coincide with the movie’s 30th anniversary.

So don’t go out and get this disc expecting anything new: the transfer is the same, and so is the extremely meager bonus material. (Murray and Donner famously clashed during the making of this film, so I wouldn’t expect them to get together to reminisce about this movie anytime soon.)